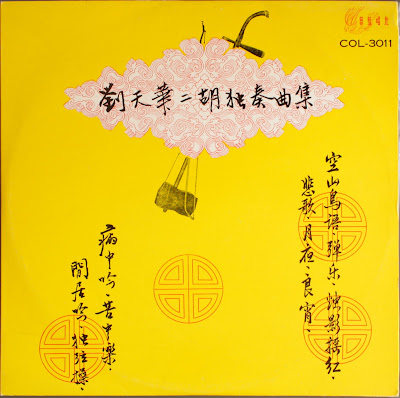 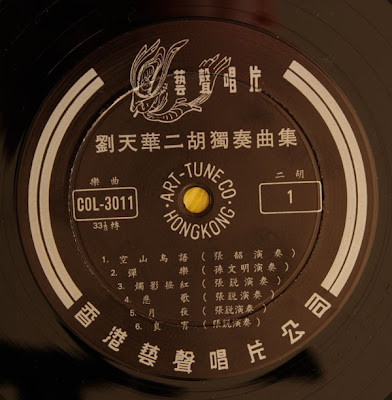 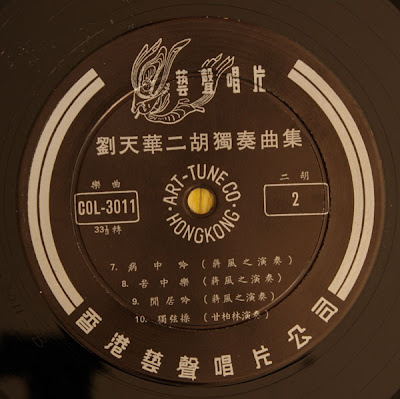 The titles of songs are often hard to render into english, and as all the tunes here are standards, there may be other, more common translations. These are all my stab at giving some english titles to the songs, but if someone, more familiar with the Erhu repertoire has better suggestions, please don't hesitate to tell me so. Not that I don't listen to chinese instrumental music, but I am more familiar with the Qin, and the various opera repertoires. I will post some of that later as I find time. 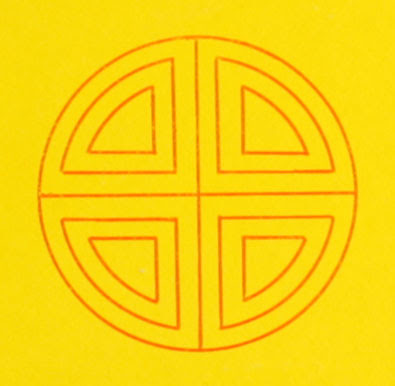 Liu Tianhua composed ten erhu solos, the LP has but nine of them but is missing
guāng míng xíng 光明行 (March towards brightness). Comment by Huqinblogger 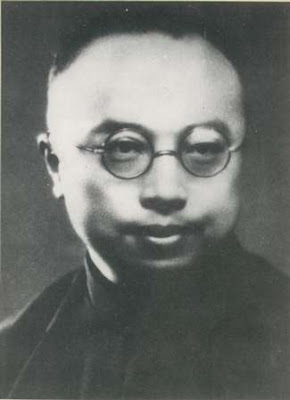 Liu Tianhua (1895-1932) who is known as the "father of the Chinese Erhu" one of the most well known composers of the early generation, performer and music educator. He contributed greatly to reform and modernize traditional Chinese music and folk music. The pieces on this LP are all standards and are often the repertoire played for grading and competitions of students and young musicians. Even thou he was only 37 when he died of scarlet fever 1932 June 8 he has greatly influenced the chinese attitude towards folk music and elevated both the music and the position of the instrument. He improved both the pipa and the erhu before his solopieces more associated with beggars and he was the first to introduce erhu as a solo instrument in higher musical education. 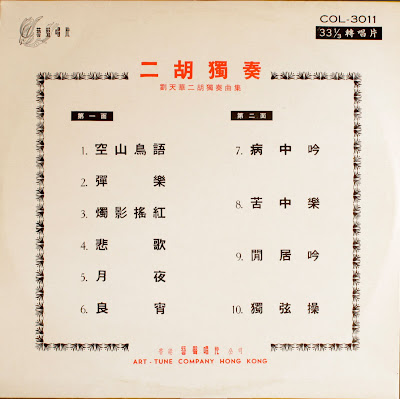 wow. this is superb

oh & thank you of course

Nice album, thank you very much.

Another gem I know I would have never come across if it wasn't for you! Thank you, dear bo!

I don't know who's the person in the photo bit it's not Liu Tianhua!

The erhu players are:

Liu Tian hua composed ten erhu solos, the LP has nine of them but is missing "guāng míng xíng 光明行" (marching towards the brightness).

Fantastic to get the expertise of huqin blogger, jyst what I was hoping for! I am no connaisseur of bowed instruments except when they accompany different chinese local operas! Thanks for educating us all the photo is on many chinese biography sites and I also found another photo of a more plump faced person. Would you perhaps have a good likeness of the composer of these tunes. Also about the dating I think that you are right and the dating I had found was to the original first recordings by Liu Tianhua. As you see from the LP-cover there is no information about either performer nor any dating. Very good of you to take the time to correct this dating. However 1960's to early 1970's is possible, but 1980's is impossible as I got this record 1973 from a friend who studied in Taiwan at the time and had passed through Hong Kong so the recordings must be before that at least ;-)
Lastly, do you have a recording of 光明行? And most important do you have any of the original recordings of Liu Tianhua? I will correct the post according to your comments as soon as I find another photo of Liu Tianhua. Since you know hat he looks like maybe yo can help out as many chinese themselves seem to be at a loss!

Thanks for stopping by!

(I have added the comment by huqin blogger and added the by you supplied names of the performing artists! I had to guess the chinese characters so maybe you can tell me if those are the right artists!

Also if you maybe can send me the chinese characters for Zhang Rui and Gan Bolin, I think I got the others right but these two I could not guess...) The only Zhang Rui was a young girl born well after this record was published, and for you they may be household names...

The LP sleeve doesn't have the names of the erhu players, but the labels on the record do, it's all there. I have several Art-Tune LPs and cassettes and I think they are really awful in sound quality and often do not have the names of the performers. They sound like as if they were copied from PRC records using a cheap mic held next to the speaker of a low grade record player.

Guangming Xing can be heard on Youtube; search with "光明行".

Zhang Rui's recording of the all the ten solos:
http://huqinblog.blogspot.com/2009/08/zhang-rui-liu-tianhua-erhu-solos-china.html

The blog has other recordings of the Liu Tianhua solos; use the search box or the labels on the right.

He he, This is so funny!
Here I go on harping to all and sundry how important it is to have the photos of labels as you almost always find some pertinent information there and then I miss that the those very lablles have all the information on the artists that I could ever ask for. Thank you very much for pointing that out huqinblogger! also I do agree with you that the quality of many of the Art Tune Companys recordings were of pretty dismal quality and I am sure the source for most of them were PRC recordings. That said, way back then when I got them I was very happy to have them as any records from China were more than hard to find. There was the Folkways 10' LP and the Lyrichord and then if you were lucky like I was you could get a few LP's out of China itself but oh so few and oh how many that only had propagandistic material on them. Anyhow great to have your assistance here and I will check out the recordings that you mention on your blog! I found some very nioce other records there as well. Thanks a lot!

looks lovely; I'll give it to my 2 erhu-playing friends. thanks!

Hi Pirate nice to see you charting the Luobaniyan waters! Guess there will be loot enough to go around for everyone and as a special "Iriteration" there will eventually be rather a lot of the previously by you sought for Vilayat Khan Early India vinyl...

really mind-blowing music! some of the best Chinese music I've heard so far... thank you so much for all your hard work sharing this!!!!