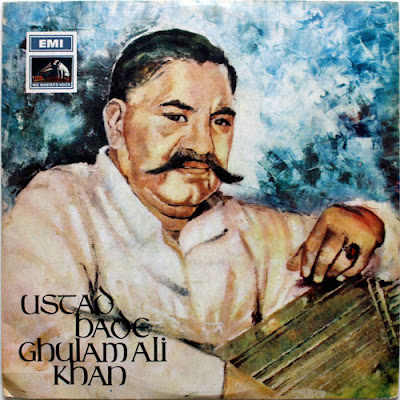 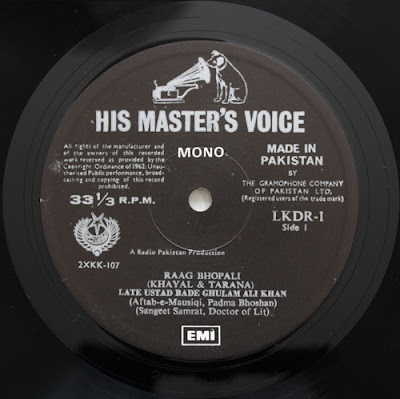 A1 Raag Bhopali - Khyal in adachautala & Tarana in teen taal 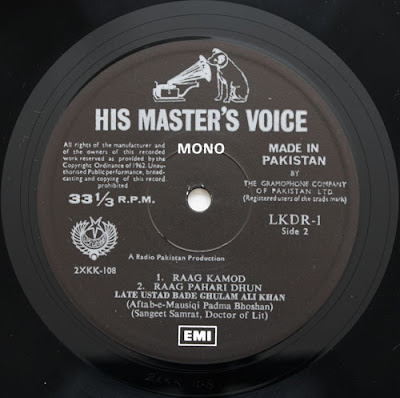 "These three items were obtained from the original recordings made by Radio Pakistan and were edited under the supervision of Munnawar Ali Khan, able son of late Bade Ghulam Ali Khan"

This is what we can read on the record sleeve. However it is also true that this is a Pakistan pressing, and the time this record was made, it usually meant that the quality of the pressing was inferior to that of the indian pressings. The record is in mint condition only played a couple of times and it is still rather full of hiss and clicks because of the bad pressing. I usually don't filter much but I did a bit more for this one as I absolutely love Bade Ghulamn Ali Khan since the first time I heard him in back the sicxties when beginning to try to understand the rich traditions of classical singing. I find the Bhopali khyal to be most enjoyable even though there are some passages that strain the ear some. Fortunately the Kamod has fared a bit better and the pressing is not so bad for that piece. I hope you will enjoy it nevertheless for the good music it brings. I will post some more Bade Ghulam Ali Khan in the coming period so you will get to hear many delightful pieces by this great master! 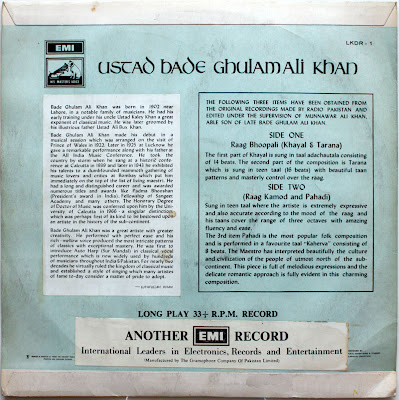 Thanks for posting very rare old lp from BGA"s fit days. Feeling greedy for such more rare stuff. Thanks again.

I will post all the Bade Ghulam I have and then some Actually there are two more being prepared at the moment, but there are so many other wonderful artists that have to be heard I still have not posted some of the great pillars like Abdul Karim Khan, Fayaz Khan, D.V. Paluskar. Nor have I yet yet gotten around to really posting any of my other absolute favourites, like Omkarnath Thakur, Mallikarjun Mansur, Bhimsen Joshi, Kumar Gandharva, C.R. Vyas, and of the female singers how can we forget Kesar Bai Kerkar, Gangubai Hangal, Roshan Ara Begum, Girja Devi, Begum Akhtar and Shoba Gurtu and manuy other deserving...
To be quite honest all this has just been a little preamble to finally get down to posting some great dhrupad most notably from the Dagars but also other dhrupad exponents. And then we have all the Karnatak traditions that are waiting to be explored!
Indian Classical music is so rich and there is so much good music s it is hard to find the time. I hope this will be a good year for taking inventory into the older recordings, much of what has not been reissued on CD yet, and above all that we shall get enough time to listen!

Anyhow I hope you will find some more things to listen to between the Bade Ghulam Ali Khan posts.

First of all I want to thank you for your excellent work. I'm myself a record collector with quite a big collection. Most of the recordings you posted I have also in my own collection. For example the Bade Ghualm Ali Khan LP from Pakistan. I have to disagree with you about the quality of the pressing. You must have perhaps a later pressing or a very used one. Originally (in the 60ies and 70ies) EMI Pakistan LPs were pressed in England and had a far better quality than any Indian pressings. My BGAK LP - which I had bought in the 70ies in England - has not one hiss or click. The same is true of all the other Pakistani LPs I have in my collection.
Greetings and all the best - especially musically - for the New Year.
Tawfiq

Thank you for your most valuable comments Tawfiq! I am truly sorry that my experience has not been the same as yours when it comes to Pakistani pressings In the record shop that some friends and I ran in the seventies we never had any huge quantities of either Indian or Pakistani records but the impression from the ones I heard back then and the ones that I have kept I am sorry to say that based on my own copies and experience the Pakistani were rather much inferior and I recall having rejected quite a few that I really would have liked to keep because of the music but where the sound was so saddening that I just could not hold on to them. I may have just been unlucky but my comment is based on my own experience and all my copies are one owner copies and in most cases, since maybe I am a bit weird but I had the practice of recording any new LP to K7-tape and listen to those so the copies I have are never played more than maximum 3-5 times! I have now while ripping some of them played them 1st & 2nd runs, but the records are absolute mint and extremely well kept since they came into my hands. Since you also collect some of the same LP's I would be delighted if you would share with us some of those! Maybe if you drop me a line to my blog mail I could send alist of some other Pakistani pressings that I would love to get better copies of and have been a little hesitant to post to my blog because of quality. Certainly I am not stating that all the Indian pressings were good, rather the contrary if we compare to european pressings of the time. They also had bigger volume and the amount of bad pressings I had to sort out in the seventies were quite big. Thank you for taking the time to write here and I envy you the obviously better copies that you have!