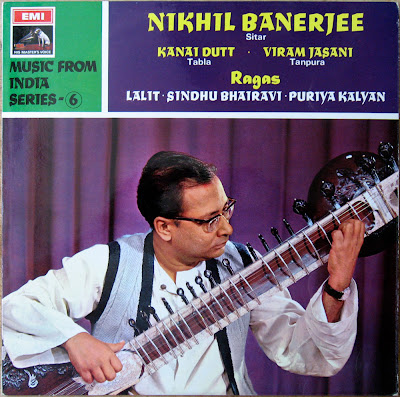 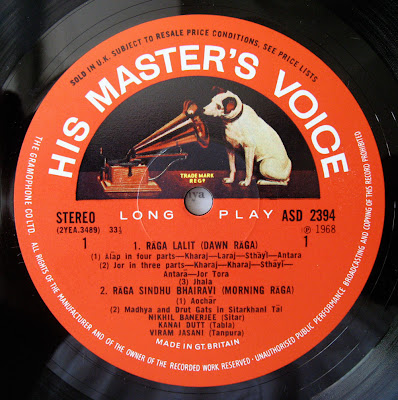 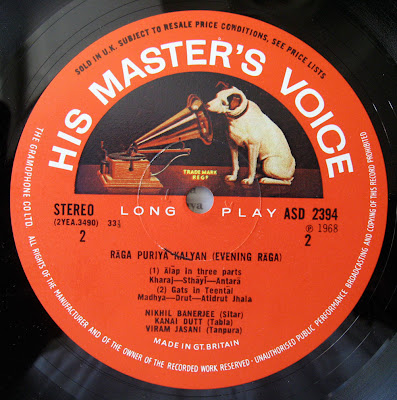 This LP by Nikhil Banerjee was the third LP from this series that I came in contact with and I post it here and will go on with the others as they materialize.

The whole series ran as listed in the previous post and I don't know of any higher number than vol. 11. So if you know better, I would be delighted if you please inform me. Also I feel a certain need to declare that this is in no way the best of the best Indian music as I understand it today or as my taste has evolved. But this is what really got me hooked. The change in taste was especially noticable, when I, upon moving to a larger city and finding more knowledgable new friends with similar but more developed tastes came in contact with the vocal music. I almost immediately stopped listening to any instrumental and immersed myself in the beautifully expressional voices of India first north and then south. Still most indian classical buffs where only into "instrumental" but in the vocal muisc I where to find much more satisfaction. Not that I don't appreciate instrumental, I still do, but the voice, and especially the male voice, is more attuned to my ear. Later posts will cover much of that and then, when still a little later I also discovered the magic intensity and glow of the Karnatic Music with The Saint composers of the Trinity and Swathi Thirunal the sky opened much wider and my heaven became bigger...

But now I am running ahead of myself, so more about that later... 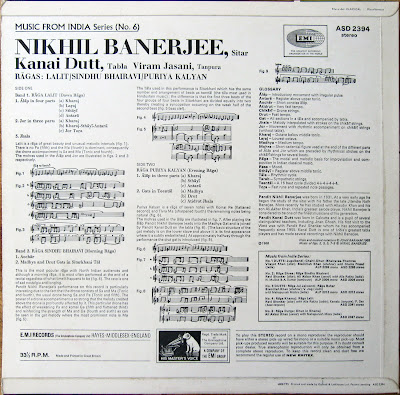 take cover, this place is pouring potential anthems all over the place. this is why you're the reigning grandmaster, fung. bolingo for the win!

What a wonderful collection of Indian Classical - that too LPs - great stuff and a million thanks.

Could you please check the Megaupload link to Pt Nikhil Banerjee's LP as it says : The File you are trying to access is temporarily not unavailable.

Could you please repost.

thank you once again, dont have this one!

Megaupload now and then has this "behaviour".
Files usually becomes available if you just wait a while. If the problem persists please tell me about it.

No problem right now when I tested....

pls. reupload to a different site, thanks!

I have discovered a veritable gold mine, such treasures. Please accept my heartfelt thanks and gratitude.
Please continue to add to this treasure chest of music.