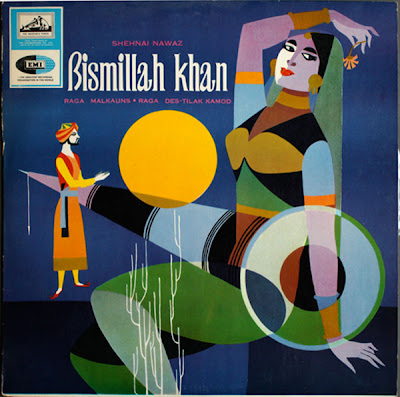 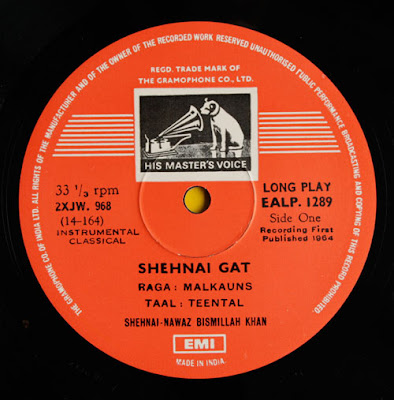 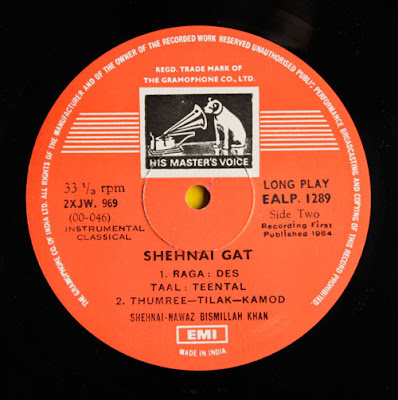 Hope this one finds an equally interested audience as the last one. This album is one of the earlier recordings by Bismillah Khan, you just have to love the cover! As far as the presented ragas are concerned, they belong to the part of the day that also allows me to listen, namely the night! The three hours of night before midnight, I'm am usually still listening by the break of dawn, but the best part for listening is really the six hours around midnight.

Not in the South though, where everything mostly finishes up at the latest a little after ten in the evening. Though late nights work in Bombay, it is not so in Madras, where they get up real early. Actually they get up just around the time when I find it necessary to go to bed. Therefore I often miss the morning prayers and chanting by the tank and I always regretted that but, someone has to make sure the passage of night is made safe as well!

I love the intimacy of the Thumri at the end of side 2, and the Des preceding it has a magical ambience and although the surface noise in the beginning of the track is a bit annoying it does get better as the tune progresses and the quality of the music will certainly capture you anyhow. Again there is no visible wear on the copy and it is played but a few times, but alas vinyl is delicate...

I'll post some more instrumental records before I get on to all the vocalists I mentioned before and that I want so much to share with you.

So much music! So little time!

Here anyhow, you can listen to one more great Bismillah Khan! 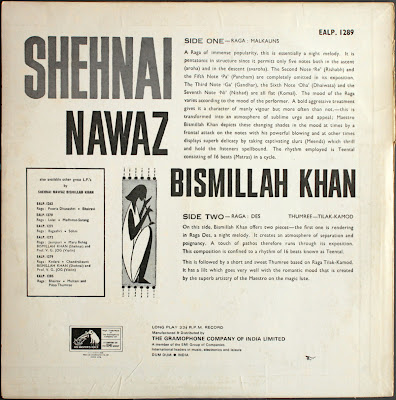 Stunning cover art. Can't wait to close my eyes and have a deeper look.

It's a pleasure to wake up to this on a rainy morning! Thank you so much, bo! I'm very excited about hearing the Des rendition, one of my favourite ragas, and I can't remember if I've heard the Ustad playing it.

Good that you appreciate the effort!
There will be many more, stay tuned!

As soon as I find time I will! But I am too busy right now !Sorry about the inconvenience!