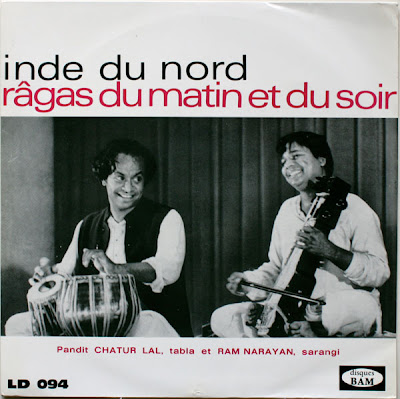 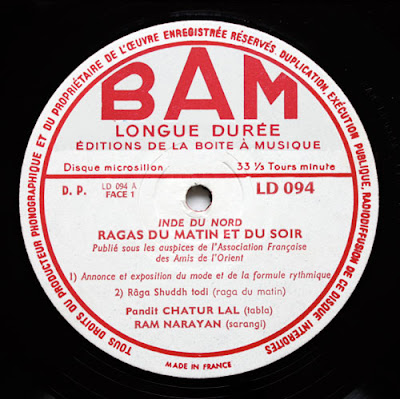 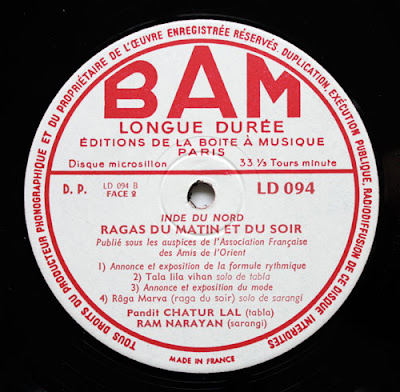 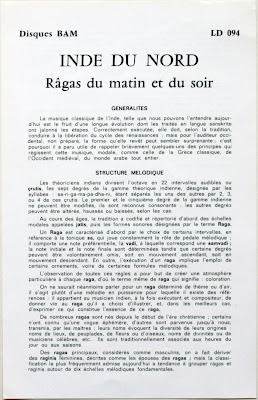 Have you ever seen such a young Ram Narayan? Or such a young Chatur Lal for that matter? Note well how Pandit Chatur Lal is listed above Ram Narayan who at this early times still is without title on the labels! He is another of my favourite musicians of the Hindustani Classical masters.

I will post many more Ram Narayan later and although I like his more mature style and later recordings that bear evidence of the more profound depths that hopefully comes with the years, but alas not to all... Some musicians turn more and more muddleheaded by each day but I won't point any fingers, those who have ears can easily hear their audience pinching tricks and musical show offs at the cost of something more rewarding and lasting. This record as you may guess is as rare as turtlefurs and it is also in perfect visual condition. But unavoidable with age it has some clicks and pops all the same!

Anyhow it is a lovely little 10' record with lots of information, there is even a little inlay in the sleeve, nothing much that is new today but gives an idea at the earliest attempts to introduce Indian classical music to the west. It is all in french but if it is not your preferred language you can always look at the scales and pictures, I'll write more about the artists later on. There is a little spoken rhytm, spoken introductions to each raga and even a rare vocal by Ram Narayan when he introduces the progression of the raga. Hope you enjoy this one as much as I and as the sarangi is one of my loved instruments there will be much more of that later. I still think it is sad that the Sarangi went out of style and was mostly replaced by the harmonium, but if you have tried to keep one in tune in changeing climate and in the cold north going in to a concert and moving outdoors to the next mehfil you may get an idea why. Anyhow it is sad because it was a much more sensitive accompaniment to vocalist than the harmonium. 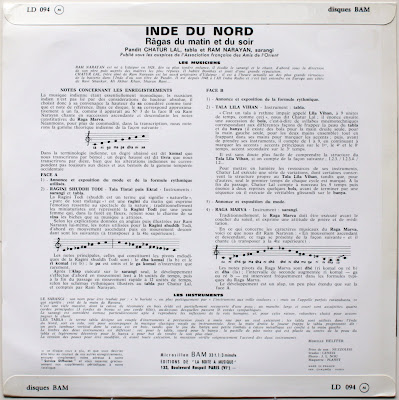 you aint lyin, this one's rarer than webbed feet on a wombat. many thanks. & whilst we wait fer the temporarily unavailable file-hosting pimps to catch up with yer fine work here, allow me to agree with yer sentiments regarding sarangi falling out of favour. it's a key ingredient in making the headiest hindustani melodies sound so otherworldly & is woefully under-appreciated by contempo icm practitioners.

furthermore, in what's becoming an increasingly common twist of synchronicity, i myself was moments away from dropping narayan's lp on the nonesuch label circa '75, which i don't believe has been re-ished either. great minds...

A brilliant post featuring Ram Narayan, whose artistry I've long admired, and a great example of why your blog is so necessary. Invariably, when i try to discuss sarangi with interested parties, someone brings up Ustad Sultan Khan, probably owing to the latter's collaborations with Bill Laswell or Tabla Beat Science. Sultan Khan is the Phil Glass of sarangi, by my lights, sawing away at the same riffs repeatedly. Ram Narayan, by contrast, is an artist on par with Robert Johnson, both men fearlessly exploring the dark areas of their respective crafts.

Also, by way of addressing Mr. Holy Warbles' note about the Nonesuch lp (please do your customary terrific job on that one, dear Owl), I received a Nonesuch release schedule - many years ago, by this point - that had reissues of all the Nonesuch Explorer albums spread out, continent by continent, over the next couple of years. Suffice to add that they never got to the Indian titles. My own theory is that Nonesuch over-extended themselves, perhaps with the big 'so what?' of Brian Wilson finishing SMiLE, in the label's ongoing effort to reinvent themselves as a latter-day Warner Bros. cool, artist-friendly company. I'd rather have the Narayan album, thanks.

Between insanely slow download times and periodic 'this file is temporarily unavailable' messages - the latter a common sight these days with Megaupload - this file is proving difficult to access. Dreary, as it's obviously a gem. Unsure as to why Megaupload retains popularity, just as puzzled by Rapidshare's fall from grace, as the latter has always worked for me.

Much Much Appreciation for posting this rare item.
Look forward to your thoughts on the Artists, and more Sarangi recordings soon.
Lovely lovely informative blog.
Bright Blessings.

Thank you for your attention, only proofs the greatness of Narayan. When Reeshard brings up the "Philip Glasses" of sarangi, there is a parallel for me here as well with Bismillah Khan and all the other Shahnai players! Of the instrumentalists he is one that moves me the most. It is as if his bow is a hook that catches me straight in my heart This immediacy gets my totla attention and then I am open to the philosophical relief of the pain that is remembered and made awake and not invoked for the reason of pleasure through pain or manipulazing the sentimental. But a life of experience recognized within the music of his continued serching movement of the bow that becomes soothing to my mind as if I am brought along with him and shown sides of myself I did not know or were not aware of.

The above verbosity should be ample proof to why we need the Music as another manifestation of our souls and why it expresses things we cannot put into words ;-) Hard indeed to write about the
philiosophical, psychological qualities of music.

About Ram Narayan suffice it to say that I have several more slated for posting here and some are allready ripped and edited. Including the Nonesuches. I have ripped several copies of those I have two different myself and a good friend had one and the problem is always with Nonesuch that they published some very good music but did not always give you the best in pressing technology. I will soon post these as they are all ready to go:

H72030 Ram Narayan - Sarangi, the voice of hundred colors (I have made three different rips from different copies of this one and I still have to choose which one to post)
and then there is the

H72062 Ram Narayan - Master of the Sarangi
then there are the Ocora LP's and the Amigo LP etc. etc. we shall see what order and when they will appear! All of them will come I just don't know when!

Finally on Megaupload, they are a nuisance sometimes in the initial stages especially, like when a file is just uploaded, But they have longevity! I have never seen so longlived files on the net as with them! I am using them for availability and because they are not giving you a nuisence even though you are not premium user. I am thinking of other startegies of posting with multiple services adn I have not yet settled upon a startegy valid for me. I have a premium user account both on Megaupload and on RapidShare (that I have stopped using more or less except for rare occasions) So until I find a better solution I hope you can live with babysitting on MegaUpload. If the problem persists don't hesitate to cantact me and I will try to alleviate the problem in some fashion or other! But stay tuned there will be nore RN and many other Ustads and Pandits and certainly there will be many more early LP's of fieldrecordings, also from India ;-)

Wow, this is just one endless onslaught of excellent music! The last few days, you've got my heart beating faster than it has since God knows when :)

Ram Narayan is a personal favourite as well and the Sarangi one of the few Hindustani instruments I keep returning to, along with the shehnai and a handful of others.

Ah yes, lots to look forward to, and I think I'm going to be in a continually excited mood these coming days. :)

I just saw your last post bo, and it reminded me to say a few things about megaupload, which I'd forgotten in my last post. Its definitely the best there is for free users. There's no "racism" like in rapidshare, which only considers you human if you come with a premium account. That said, mega has been behaving awkwardly some times in the last few weeks, but most of this can be avoided by using J downloader to get your files. Just copy the link in, and it'll get to you no matter how long it takes.

Keep it up! Thanks for wonderful work

Thank u very much, sir! Indeed a treasure it is!
Have u any rare JUGALBANDIs?

Do you approve of this practice, listing the drummer before the sarangi player?

On his latest release, Ravi Shankar lists the tanpura player before Alla Rakha.

Hi Bolingo! These recent posts look great, but for some reason the megaupload link isn't available on this & a few others from around the time this was posted. Would love to check this one out. It was great to see Ram live in Chicago a few years ago.

I missed your comment and I was away a bit. I am aware of the problem some people are experiencing lately and it happens also to me more and more lately. I have premium accounts on both Megaupload and Rapidshare and the sad thing is that neither are 100 % foolproof (nothing is really) I f I post to rapidshare some people complain that they cannot download and/or that it takes forever to get a "ticket" and when I switched to Mega it is the same thing! Reason I did so is because of perceived longevity. The many threats from Rabid to move out files not accessed in a long time are some proof that it file existence over there is more ephemeral. That links seem to be less stable, maybe one reason for Megaupload to be so recalcitrant. It seems that it is also different in different parts of the world. Maybe it is more a national thing "all slots filled for your nation" try again later obviously. I am looking into the multiple upload services and will possibly change links for that but I have not decided yet. Please bear with me I may try something out already for the next post. Sorry about the inconvenience but maybe this could alleviate some ill feelings. I will to the best of my ability rejuvenate and/or revive any dead links if you only report them to me!

Back to editing some new posts....

Thanks for the series of Ram Narayan's LPs. If you have other recordings not (yet) in digital format (like possibly the East German Amiga recording), it would make me very happy.

Have no idea about any east german recordings with Ram Narayan. I will however later on post some more of his LP's and one of them is on the Swedish label Amigo. If you really have discographic details or other information about any East German recordings please let me know!

My mistake. I should have read more carefully. Amigo and Amiga are not only different genders, but, as record labels, also from two different countries. If you think that the Swedish Amigo LP is worth a spin, I'd love to listen to it.