Bismillah Khan - The Soul of Shahnai 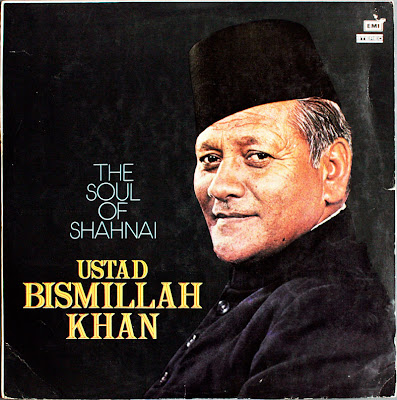 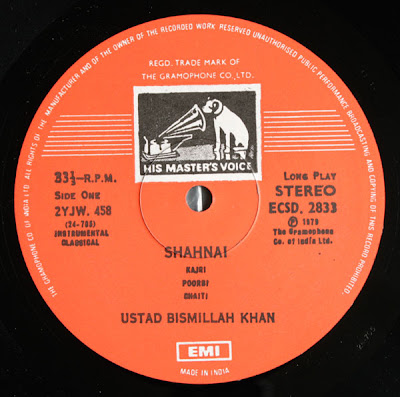 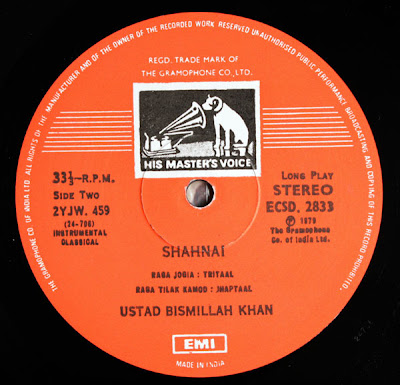 I promised before to post more Bismillah Khan! He is one of the musicians who more than many, over the years, since I first heard his mellifluous but never frivolous shenai in the sixties, that constantly have helped me in my life! The compassion and warmth that I feel emanating from his person and his breath through the reeds, have helped to clean both my ears and mind from the travails of this dusty world. To many listeners to the musics of this blog he needs no description, and the long artistic career beginning all the way back in the third decade of last century and spanning into the first of this one. Fortunately his recordings proliferated during the late sixties and early seventies as those recordings, to my ears are his prime ones. There certainly were many good recordings over the years to follow, although I think many of those had the Ustads shenai drowning by the sound of the "Party" and by poor mixing, where percussion was given too much prominence.

I will continue to post some more LP's of mostly indian pressings, and although almost all of them are still in mint condition, there is the occasional surface noise, some pops and other artifacts due to pressing technology of the times. I am not trying to filter or edit anything except pops and clicks between tracks. I may update some of the more valuable posts later if I get enough time to do any filtering and editing, but as it stands all my rips will be left as intact as possible! On occasion there is slightly more noise in the beginning of an LP-side but that often just goes away after a few seconds into the record.

The music is anyhow magnificent regardless and I hope you will enjoy this as much as I and his Excellency with whom I share my great admiration both for the person and the musician Ustad Bismillah Khan! And some more good news is that his Excellency has already committed some other items from his collection for me to share with you later on. 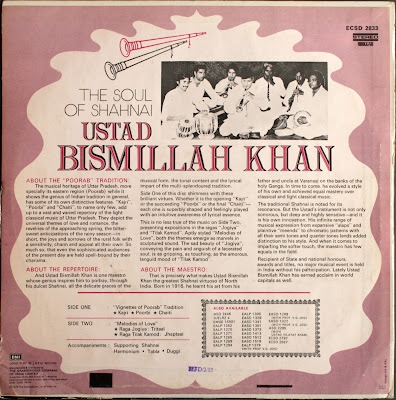 Ustad Bismillah Khan Sahib (Urdu: استاد بسم اللہ خان صاحب; March 21, 1916 ? August 21, 2006) was an Indian shehnai maestro. He was the third classical musician to be awarded the Bharat Ratna (in 2001), the highest civilian honour in India and gained worldwide acclaim for playing the shehnai for more than eight decades.

Bismillah Khan was perhaps single handedly responsible for making the shehnai a famous classical instrument. He brought the shehnai to the center stage of Indian music with his concert in the Calcutta All India Music Conference in 1937. He was credited with having almost monopoly over the instrument as he and the shehnai are almost synonyms.

Khan is one of the finest musicians in post-independent Indian Classical music and one of the best examples of Hindu-Muslim unity in India and had played shenai to audience across the world.He was known to be devoted to his art form that he referred to shehnai as his begum, wife in Urdu, after his wife died. On his death, as an honour, his shehnai was also buried along with him.He was known for his vision of spreading peace and love through music.

Khan had the rare honor of performing at Delhi's Red Fort on the eve of India's Independence in 1947. He also performed Raga Kafi from the Red Fort on the eve of India?s first Republic Day ceremony, on January 26, 1950. His recital had become a cultural part of India's Independence Day Celebrations, telecast on Doordarshan every year on August 15. After the Prime Minister's speech from Lal Qila (the Red Fort,) in Old Delhi, Doordarshan would broadcast a live performance by the shehnai maestro. This tradition dated from the days of Pandit Nehru.
[edited from the Wikipedia]

Looks absolutely marvellous! And like you say, one can never get tired of Ustad Bismillah Khan.

Thanks and best wishes to you and to His Excellency!

no never ever one can get tired of ustedes ...

please add my praises to the praise jar in praising praise of praise-worthy platters. props & praise to you & his excremency

Glad you liked it!

Maybe I should post some more BK immediately before going on to the other as praiseworthy other LP's I have lined up for you...

The Record Store of India said...

If you are looking for Indian classical Vinyl LP records please contact us at shellacvinyl@gmail.com