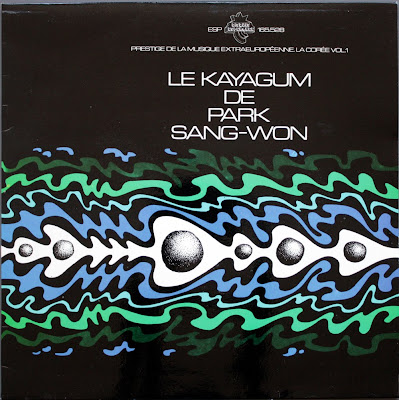 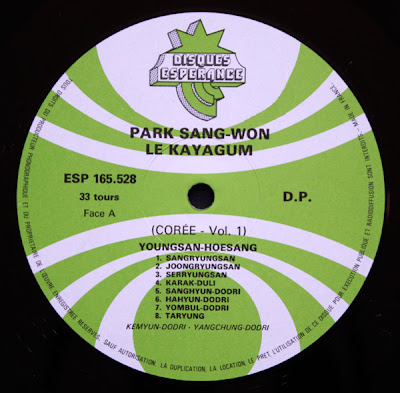 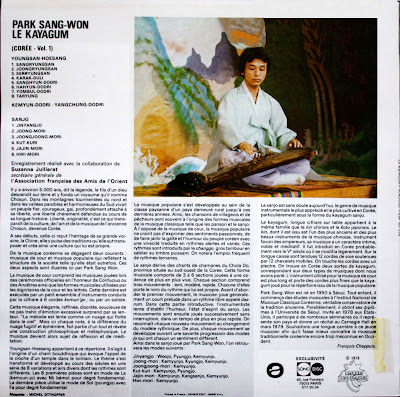 Here is an LP that came to me as a revelation in the late seventies. I was very impressed with the keeping of time in the music, especially of the Sanjo compositions. I was listening at the same time to a small ensemble playing shaman music that I had found on a set of 8 K7's that had been presented by an Korean National institute to an institution here and that I had managed to borrow. I will try later to post all of those K7's as well as they contain great music but there is still musch editing to do before they will show up here. Anyhow I start with this one out of Korea as I have not been able to find any volume 2. At least for the moment that makes the publications of this subsection complete! 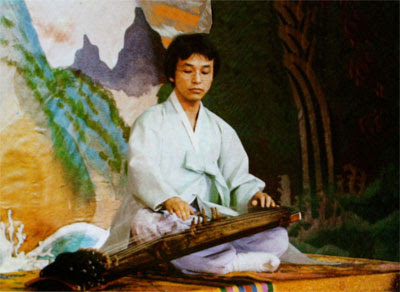 I will present more records from this series by Disques Espérance, as it has a few real pearls in it, and I will publish my attempts at a discography of the series pompously named "Prestige de la musique extraeuropéenne" in as much detail as possible, at least as far as I have been able to reconstruct it by today. Any more information is most welcome. See my previous post for a first list of titles!

this is why i love winter in luobaniya. a most auspicious return

Welcome back Bolingo, what you share in your blog is really precious. Thank you very much for the Kayagum gem.

Thank you very much, bolingo!

Thank you for your kind words! Nice to see you all so cheerful. I have just returned back home with some great vinyls I found at my friend his Excellencies mansion. Some rather precious stuff that I will share with you during the permafrost here. Also I have good news that I may fill in 3 more titles of the Anthologie de la musique des peuple. And I also found out that there is at least one Lao Hmong record in that series that I have not yet seen before.

And finally this one that we need to get our hands on!

That's great! I know I've said it before, and everybody else has said it too, countless times, but anyway, I wanted to thank you for your time and your passion in preserving what are not only rare, but in fact invaluable cultural treasures!

Whenever I think of what you're doing here, I seem to break into an inadvertent smile, even if I'm on the road, walking somewhere by myself. :)

And yes....I forget, the Kayagum is just super! Thanks!

I am listening to this record right now and while I wasn't expecting to like it particulary I find it to be most pleasing! Thank you very much!