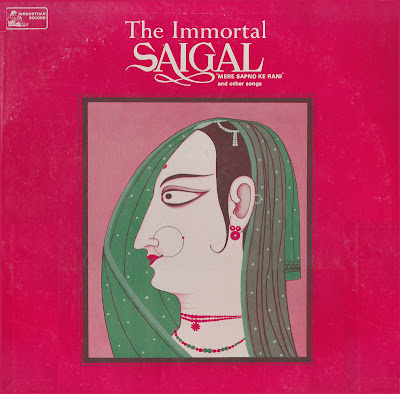 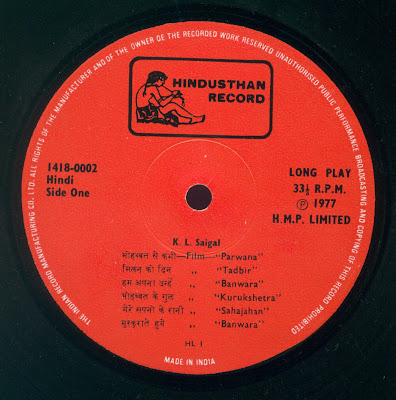 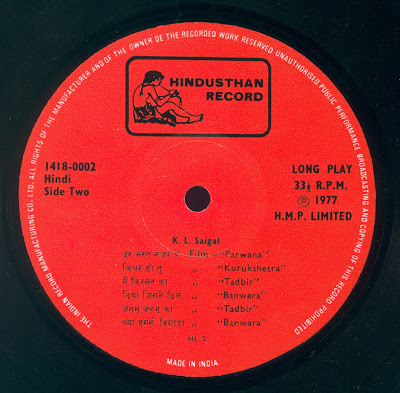 So, when it comes to Indian filmi and old plates. Here is the real object of my undivided musical love and nostalgia for almost forty years now. There is so much music, especially from India that I will share with you here but I cannot any longer keep him from you, and hopefully I can turn some of you on to this absolutely delightful pleasure. There is nothing more foolproof than being nostalgic for locations one had no chance of being in, at times one have not lived through. At least not when they were happening! But who is concerned with such trivial details, and anyhow, not even the future is what it used to be! 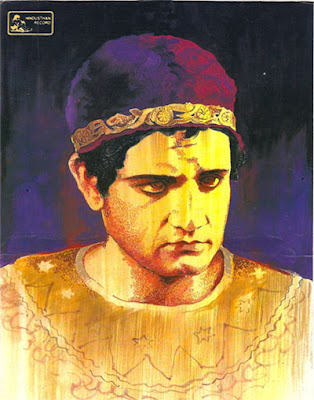 This is one of my big "singing heroes". I am a bit nutty about anything by Saigal. Especially the sentimental tunes and fortunately most of them are ...

As far as I have been able to find out there is only one biography over Saigal in english and it has long been out of print. 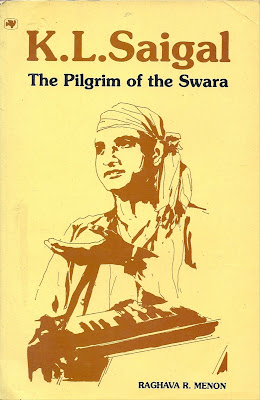 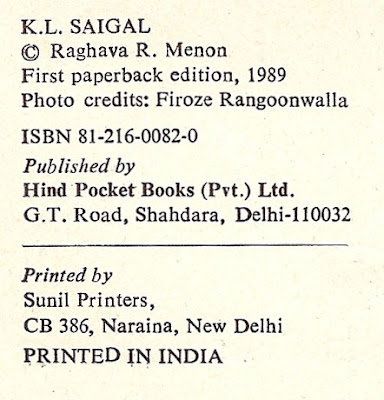 But here is another, altho brief account, to get a little background.

Eons have gone by since his voice left people awestruck. K. L. Saigal was really the first male superstar of Indian Cinema who set the tone for musical melodrama acting in the 1930s and 40s. He was the pioneering singer of Hindi films. In the span of 15 years, he acted in 36 films and sang over 200 songs.

The virtuoso of music appraises Saigal as the 'Ghazal King'. Recognized as the greatest singer of the century, K. L. Saigal was a musical genius who mesmerized his audiences with his powerful and mystical rhythm, which had a touch of the divine. Without any formal training, Saigal stunned the music maestros of his time with his intuitive discernment of the (note/tune) 'ragas' and his splendid and reverberant voice.

Kundan Lal Saigal was born at Jammu on 12th April 1904. At the age of twelve Saigal gave a rendition of Meera Bhajan in Pratap Singh's court. The Maharaja was impressed and predicted that Saigal had a bright singing future. He was introduced to music by his mother. His only formal training apparently came from a little known Sufi peer, Salman Yussuf.

In 1932 K.L. Saigal's film career launched when he signed a contract with New Theatre to act and sing in films. Though not conventionally good-looking, people responded to his every man demeanor, that voice and his dialogue.

Saigal's first film was Mohabbat ke Aansoo (1932) but it was with the success of Chandidas (1934) that he became a star. Bhakt Surdas (1942) and Tansen (1943) were big hits and consolidated his popularity. The songs of Tansen are brilliant in their royal glory. The film successfully shapes the classical and semi-classical thumris and dadras to the need of cinema. Above all, the film is still remembered for Saigal's astonishing rendering of Diya Jalao in raag Deepak. Meri Bahen (1944) is technically one of Saigal's best films at New Theatres and was known of course for its music. As an actor-singer, Saigal attained unprecedented fame and popularity.

In 1935 Devdas benchmarked the star-singer's popularity. The story of a love-struck and doomed Devdas, based on Bengali writer Sharatchandra Chaterjee's novel and directed by P.C. Barua, the film was a triumph for Saigal and took him to dizzying heights. Saigal brought alive the character of Devdas creating the archetype of the relentlessly luckless, tragic hero. His brooding looks, the vagrant lock of hair, the sonorous voice filled with love and despair drove the nation into frenzy.

Saigal the singer surpassed Saigal the actor. The singing tradition he assimilated emphasized the poetic blending of syllables into musical forms. Saigal loved Urdu poetry. His musical interpretation of the ghazal gave a new form and content to the meaning of the verse. He produced an amazing array of emotions and sentiments. In fact, he succeeded in striking similar chords in the listeners' hearts. Many Urdu poets like Zauk, Seemab, Bedam, Arzu and Hasarat became famous, thanks to Saigal's translation of their poetry.

But Saigal's most favorite remained the great Mirza Ghalib. He immortalised Ghalib by singing his verses with his heart and soul, interpreting the deep meaning of every syllable. It is through Saigal that Ghalib gained vast popularity even among audiences who were foreign to Urdu. His renditions of Mirza Ghalib's poetry and his identification with its tragic iconography formed the famous Saigal persona. It is a less known fact that Saigal himself was a poet and is said to have recited his own compositions.

He brought music to the masses and, with his unique style, gave a totally new dimension to the music of his time. Up till 1946 right from 1932 the Hindi film world was called as K. L. Saigal musical era. Saigal had taken to alcohol and hence his health began failing. Saigal breathed his last on 18th January 1947 in Jalender, his hometown. The legend passed away depriving music lovers of his celestial voice. Sixty years since his demise, the immortal singer's haunting resonant voice continues to enchant listeners on early morning radio or on some fanatic collector's old gramophone player. 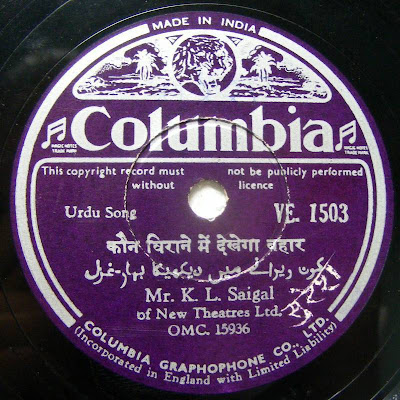 Another label from one of the numerous 78 rpm's. 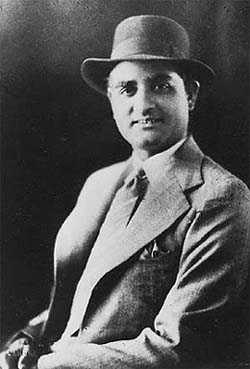 Himself of plain background was always the elegant mild mannered gentleman.
He brought brilliant love poetry and refined music to the masses

Here is what another, anonymous snippet, has to tell:

Famous Hindi Cinema actor and playback singer K. L. Saigal was born on April 11th, 1904 at Jammu, Jammu and Kashmir. Apart from his playback singing, he was also an actor and is considered the first superstar of Bollywood. He was born to the family of Amar Chand and Kesar Bai. His father was a tehsildar at the court of the Raja of Jammu & Kashmir and his mother was a deeply religious lady who was very fond of music. He was fourth of five children in the family and his formal schooling was brief and uneventful. His mother used to bring him in religious functions where ‘Bhajans’ and ‘Kirtan’ and ‘Shabad‘ were very commonly sung. Those bhajans or krtans were based on classical music which later inspired him. Later he was dropped out of school and he started working as a railway timekeeper. He married Asha Rani in 1935 and had three children.

Later he joined the Remington Typewriter Company and worked as a typewriter salesman. His work allowed him to tour several parts of India and once he moved to Lahore where he met with Meharchand Jain. Later both moved to Calcutta and had many a mehfil-e-mushaira. By that time Saigal was a budding singer and got the appreciation from his friend Meharchand. His passion for singing continued and became more intense with the passage of time. Then he was hired in 1930s by B.N. Sircar who was the head of the Calcutta-based film studio named New Theatres. Here Saigal met with some respected music composer and his contemporaries like Pankaj Mullick, K. C. Dey and Pahari Sanyal. He was employed by New Theatres on a contract basis of rupees two hundred per month. In 1932, K. L. Saigal made his debut in the Hindi Cinema with the movie titled ‘Mohabbat Ke Ansoo’ which went unnoticed.

Later in the next year 1933, he gave his voice in the movie ‘Puran Bhagat’ where he sang four bhajans which created a sensation throughout India. He was shot to fame with those bhajans and he never looked back. Once, legendary Lata Mangeshkar is alleged to have said that she wanted to marry K.L. Saigal after seeing his performance in Chandidas. It was the year 1935 when he appeared in ‘Devdas‘ as a lead actor and also he had given his voice to the songs in the movie. His songs “Balam Aaye Baso Moray Man Mein” and “Dukh Ke Ab Din Beetat Naahi” created history in India. Some of his movies in which he acted as lead actor such as President (1937), Street Singer (1938) and Zindagi (1940) became famous for his singing. Saigal moved to Bombay in 1941 where he worked with Ranjit Movietone. His movie ‘Tansen‘ in 1943 was always be remembered for his song “Diya Jalao” and “Sapta Suran”. He died at the age of 42 at Jalandhar on January 18th, 1947.

Here is a clip from one of his movies. The song is "Mere sapnon ki rani" 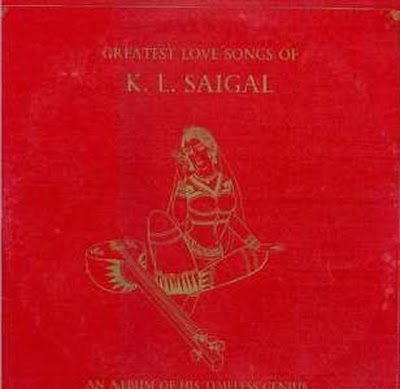 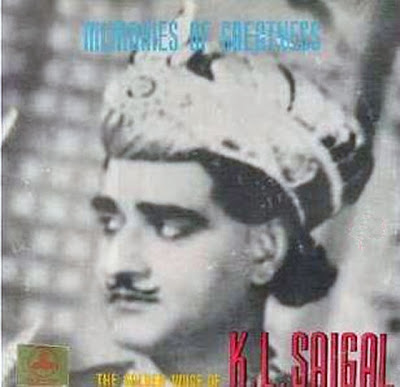 Two compilation LP covers from the sixties of Saigal's songs.

Here are some more YouTube links to famous songs

these first few are some of my real favourites:

Kundan Lal Saigal died of cirrhosis of the liver on 18th January 1947.
The band played Jab dil hee toot gayaa at his funeral as per his dying wish.
Just around 250 soulful songs and 28 films had made K.L. Saigal immortal in the Musical Hall of Fame. 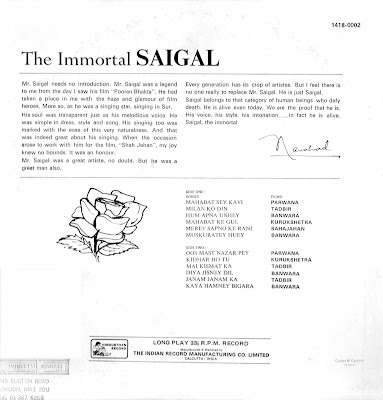 This LP was presented to me by a friend in music and I thank him much for that! 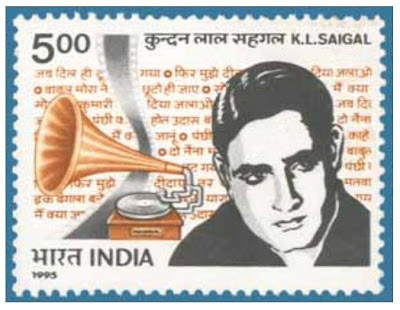 just superb & so worth the wait. i refrained from listening to any saigal cd's as i think this is a much better way to dig something. fresh from the fuzzy vinyl & sounding sublime.

I think this is as good an introduction as any to Saigal. Thanks for the music and the information, that you've compiled with so much love!

WOW. What a find and the link is working! I am delighted!!
Beautiful.

Thank you so much.

Nice that you liked it Subarashi.
Maybe later I will post some more Saigal, do come back and check now and then...

Sir,
The link to the download is no more valid. Can this be reactivated / uploaded?
Thanks.

The link has been rejuvenated and please do report any other links that has gone sour should you find them!
I will replace any dead links with working ones time given!

Bro Link is not working
Please re-upload
Thanks in advance