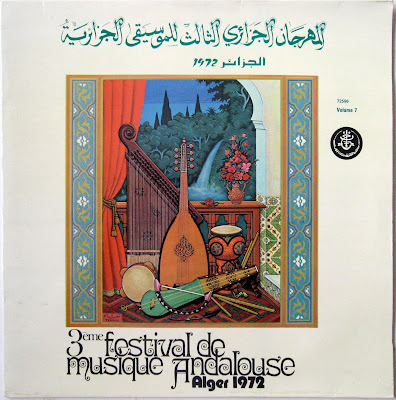 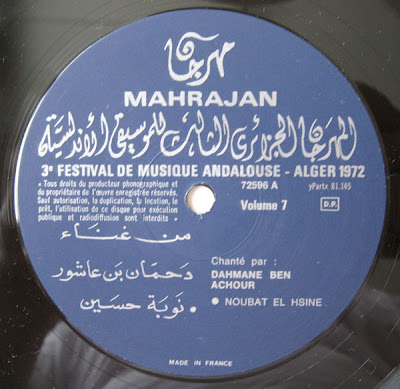 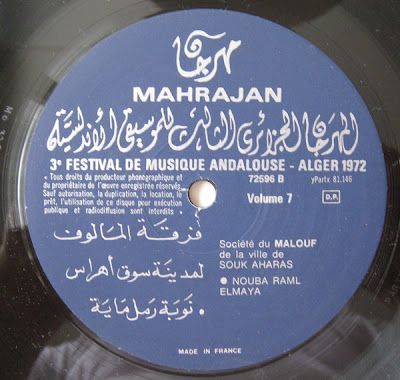 This is an LP that has one side dedicated to one of my absolute favourite singers. 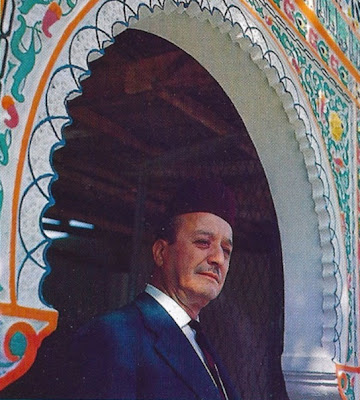 His real name was Achour Abderrahmane, born on the 11th of march 1912 in Ouled Yaïch (Blida). Having lived a long part of his life in Alger he died in 15th of September 1976 back in Blida , after an astounding career as a well renowned singer, having started out as with his father as a barber occationally singing for weddings, he gradually rose to fame and became professional.

This record has a live version of Noubat Elh'sine, one of the pieces that together with the Noubat Ezzidane: Ellouzou Fatheh are some of his very best! It does not have all the intensity of Ellouzou Fatheh but it will give you an idea. His rhythmically unbound pieces are my favourite, but it does not matter much what he sings, as he always touches me and makes me feel, that at least I did not waste my life totally, I got to listen to Dahmane Ben Achour, who originally was a barber but rightly became a celebrated singer with his own weekly concert slot on the young Algerian TV!

The group on the B-side I have been unable to locate any significant information about and although the music in parts is very good the singing is not better than average. 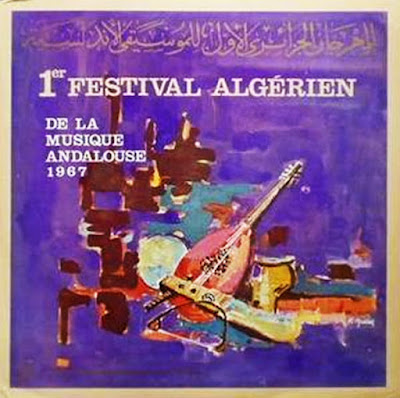 One of the LP-covers from the first festival in 1967.

This is, as you can see, only one of the volumes from the third festival and it is volume 7,
Altogether there were 10 LP's published that year only, as you can see on the list below, so there are quite a few more to unearth and dig out of their various dusty hiding places.

I know for certain, that at least two more later festivals where registrations were made, were published and issued on LP and K7. Someone I know, at least has a set of open reel tapes from some of the other concerts from various years, and someone else, that I know, know someone else, that has the volumes 2, 6 and 9 of this 3rd festival. Hope you are watching ;-)
So it is time again to take inventory!

Anyone with recordings or information are welcome to participate and contribute. If you do have more information about the recordings mentioned in this post, or from festivals from other years, please leave a comment! 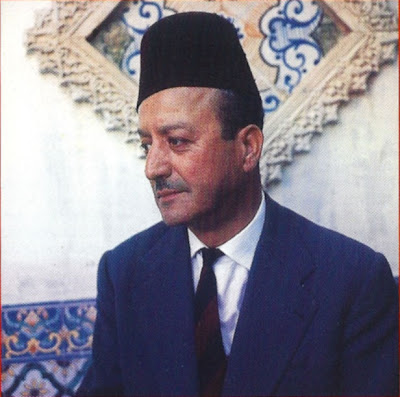 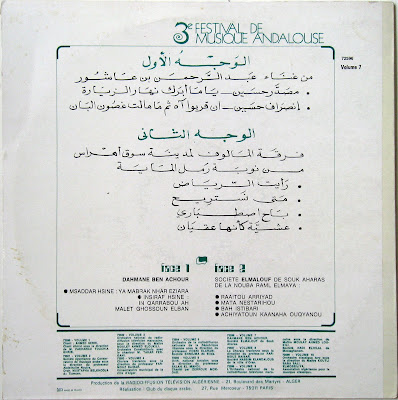 And here are some pages on arabo-andaluse music that I wrote some years back in Swedish only, but has a discography that is understandable to most people and you can always google translate and look at the pictures. 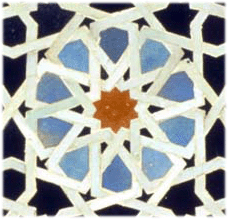 hombre it's even getting better ...

Great music, and another wonderful presentation, bo! I think you're setting a standard here.

Thank you for your generous encouragement!

I am still just trying to learn the ropes here!

Hope it gets even better as time gives me more practice!

rest assured, you did not waste your life in the slightest brother! for my sheckles, Dahmane Ben Achour is the single most revelatory artist in all of creation at the moment. what a naturally regenerative voice he has. likely your most profound & generous gift yet. i reckon i must have been going too fast to appreciate him properly until very recently. i sometimes feel like i'm running for my life, trying to play catch-up with the things that i missed out on in my indulgent past & generally being extremely overwhelmed. d.b. achour is the sweetest elixir for these racing thoughts & has these past daze been soothing me enough to deal with my insane emotions. ambrosia for my ears. thank you 777 thymes for this invaluable education. these soulful anthems & your exquisitely refined taste make this place a holy space that gleams with a glowing intensity.

Good things! We really appreciate what you're doing here. I only recently became aware of "Luobanya" but would love to see some picutres of the population too. Also just so you know there is a skip on A1 of this record at 7.32...otherwise a really great effort!

Thank you for your kind comments
The "skip" you mention on the A-side really seems to be a "clumsy edit" there is no problem with the record The record looks perfect itself and ocular inspection with highly magnifying glass shows nothing. That said I am very happy if someone comes up with a second copy of this as it seems to be extremely rare.

also do not forget to inform me if you find any of the other 21+ volumes that got issued in this series and now hardly have left any trace in the webosphere. I will after the summer digitize and post a few more.

hi, I found the complete box on a flea market in grenoble last week end with a lot of algerian, lebanese and egyptian lps (and 15 EP!), the woman wanted to give me all the stuff because she was happy that a french man appreciates this musics! I appreciate your blog that I discover Ph