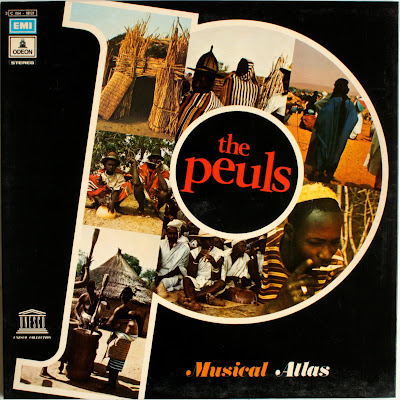 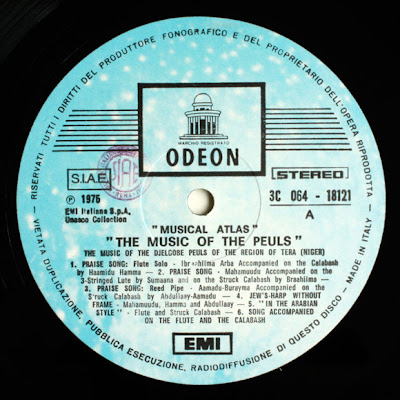 * Note well, that track 4 a,b,c,d are one track on the LP, I split them for clarity as track 4c is not Jew's-Harp, as listed on the LP, but rather could be described as rhythmic song and handclapping. 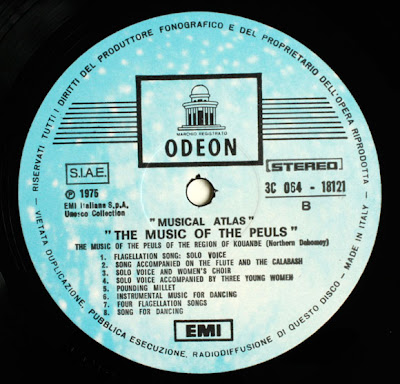 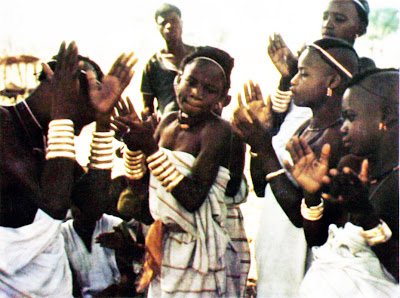 This is an LP from EMI Odeon Italia in their series World Atlas. It was part of the Unesco Collection supervised by the General Editor Alain Danielou. The recordings and documentation was done by Simha Arom. They published maybe around 30 LP's in this series. I have only knowledge of the titles for most of them and I will post a few more. Maybe someone can help out with more information. I have been thinking of maintaining discographies online edited by several participators but more on that later. 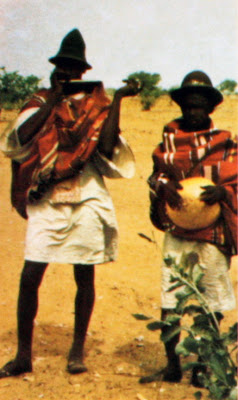 The Peuls, (or Fulani) are spread across Senegal, Niger, North Cameroon, North Nigeria usually defined as a group by the common feature of being nomadic herdsmen and does not form an ethnic group or a race. They are also spread in Guinea-Bissau, Mauritania, Central African Republic, Mali, Gambia, Liberia, Ghana and Sierra Leone. And the estimated total figure of the population at the time of recording in the early 1970ies was believed to be in excess of six million people. Since they are so spread out it is hard to get a updated figure but it is believed that the population have more or less doubled today. These recordings, judging from the liner notes, seems to have been made in Niger and possibly Burkina Faso then Upper Volta and also belong to that category of records where closeness and intensity is pulling the lister into the group of musicians. I especially like the women pounding millet and the non compromising and relentless suction of air in the frameless Jew's Harp pieces. It seems also that we tend to do all too little rhythmical clapping around where I reside. 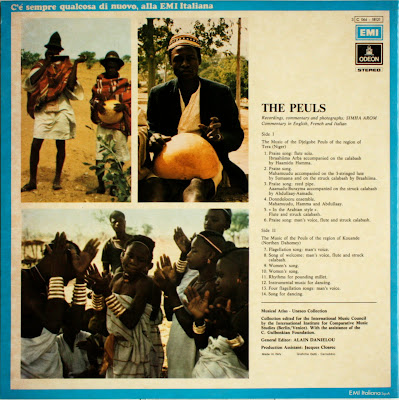 I would like to see it not as a simple coincidence..it's always nice to have this kind of tunning.I knew from your comments that we share a soft spot for fula,I will edit my post and link directly here.many thanks for the Italian EMI ,a rare recording indeed.
to be continued...

The praise song played with the reed pipe and the song accompanied on the flute and calabash are really mesmerizing. Great album, thank you very much, Bo.

Yes, I agree with all our good friends above. Another diamond saved from the dust of oblivion.

Thanks for your comments!