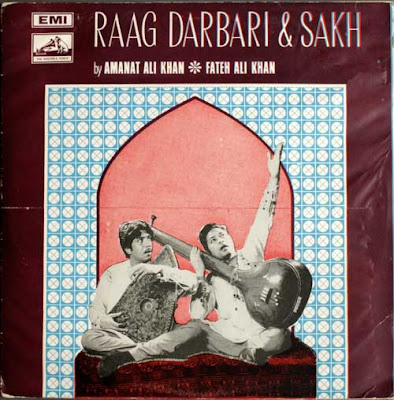 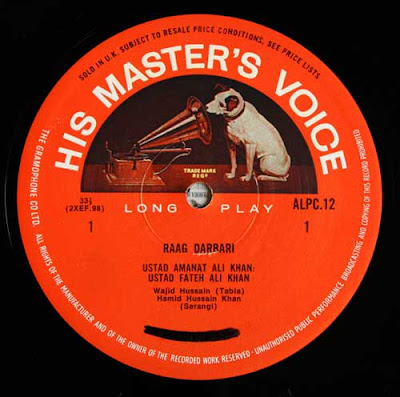 One of the most popular of our Raags Darbari was created by Naik Mian Tansen, one of the nine ‘gems’ of the great Moghal King, Akbar. It was the monarch himself, who in view of this Raag's stately form, inbuilt grandeur and majestic overtones gave it the name Darbari, literally meaning ‘of the court’ – that is a Raag fit for the Kings. This assessment of Darbari has not changed in the last four hundred and fifty years and it is still considered a Prince among the Raags. In fact no classical singer or instrumentalist can be considered to have finished his education without complete mastery over this important melodymode.

Amanat Ali Khan, Fateh Ali Khan's rendering of Darbari is in three phases. The opening slow movement is in Iktala a rhythm of 12 beats, the second in Teen Tal having 16 beats and the third even faster movement is a Tarana, also in Teen Tal.

It is a seven note Raag of the family of Sakhs. The fourth and the seventh are flat and the rest of the notes are sharp. Structually and even emotionally it is close to Ragesri. The little changes of stress in the notes in the three composition bear testimony to their different origins. The spirit of the Raag. as indeed its treatment, gives the impression of peace, of quiet beauty and of subdued richness with the soft under current of gentle romance.

Sakh is sung for you in three movements. The first slow phase is in Iktala, the second faster movement is in Jhaptal – a rhythm of 10 beats - and the final movement, the Tarana is sung in Teen Tal. 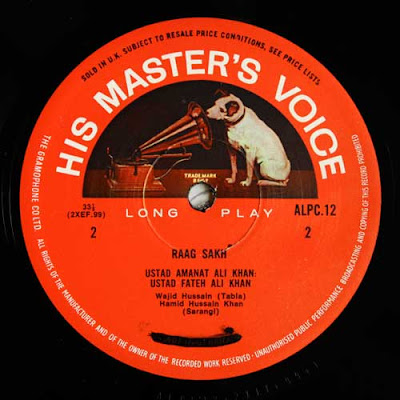 The Sarangi accompaniment is provided by Ustad Hamid Husain
and the Tabla is played by Vajid Husain.


Here is a response to a very recent request. I was holding this back as I always think I could come up with some reason connecting one post with another but there is really no excuse not to post this. It was one of the records I brought with me to Peking in the seventies as a part of the life supporting music kit. Half of my suitcase contained music, free jazz, second vienna school, african field recordings and popular, arabic and indian classical and because of the times Peking opera was barely to be heard no recordings were available on kunqu opera so I brought a lot of that, and a lot of coffee and almost no clothes! This one got much playtime in my "student room turned musical café". Hope you enjoy. Truly music "of the court", the best thing with that is that in Luobaniya we can all be the pashas, the moghuls, the maharajas, the viziers, the caliphs, the nawab, the pradhans, diwans, and the sultans and the khans and... (did I forget someone?)... Anyhow true nobility exists only for those with ears to hear! 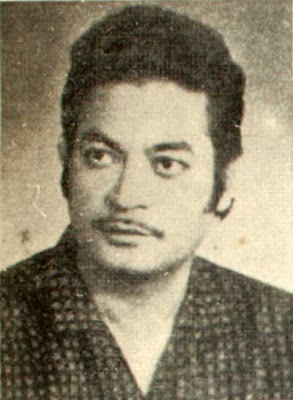 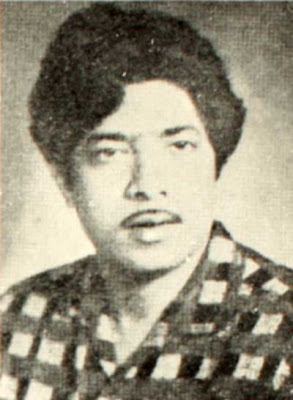 Ustad Ali Buksh, in keeping with the ancient Dhurpud tradition, used to sing with his friend Ustad Fateh Ali Khan, father of late Ustad Ashiq Ali Khan of Patiala. He also had many memorable solo performances to his credit. So great was the fame of these two maestros, that to this day, nearly half a century later they are household names throughout the length and breadth of the sub-continent.

They had the good fortune of imbibing the knowledge from no less than four schools of Khayal singers. Their relentless devotion, combined with intrinsic talent and authentic musical education, flowered into a distinct form of Khayal singing, known as the Patiala Style.

The Patiala music is singularly rich in Khayal and Tarana compositions and has the freshness and vigour of the modern times along with the classical authenticity of the ancient Raags.

Today, Amanat Ali Khan and Fateh Ali Khan, sons of Ustad Akhtar Hussain Khan, represent the best traditions of the Patiala Style of Khayal singing. In this album you will hear their versions of Raag Darbari and Raag Sakh.


quoted from the sleevenotes of Salim Gilani 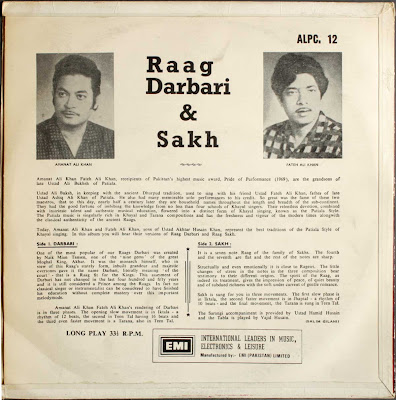 Yes, this has indeed put a big smile on my face! Fantastic offering, bo, and it comes at a perfect time. I've been listening to Mahmud Mirza's stately exploration of darbari on repeat over the last few days.

That room is Peking must have been quite the scene :)

Thank you very much, Bolingo!

man alive, what a sweet surprise! you continue to out-do yerself. many thx in kind, minstre de la lumière

Bari meherbani janab -e- ali!
Thank you so much. This stuff is incredibly hard to come by in the Pakistan of today.

A good choice of antidotes against every possible illness, Bolingo Shah!
But did you packed your turntable too? And was free jazz successful in Beijing?

great post, bolingo! this is one of the finest!

bro from where i can get these record

ustaji, what do you mean? Do you have problem downloading it or do you want to obtain an original physical copy of the record?

yes bro i want original physical copy of the record...plz

Dear Sir, I found £permission denied" when I tried to download...can you help me?

I found "Permission denied" when I tried to download would it be possible to fix the download? Thanks a lot for these treasures

Would hate to miss this one

thank you very much for sharing this very rare LP. the performance of Raag Sakh especially is outstanding!
your transfer of the LP is outstanding as well! although i would love to obtain a physical LP. if any leads pls share.
many thanks once again!

Thanks for sharing very rare LP. Plz upload this LP in loseless format .
Thanks