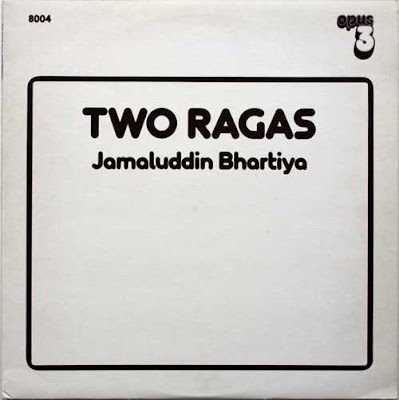 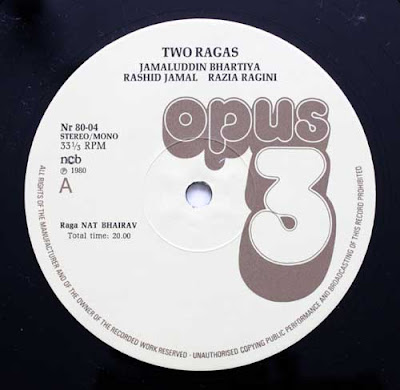 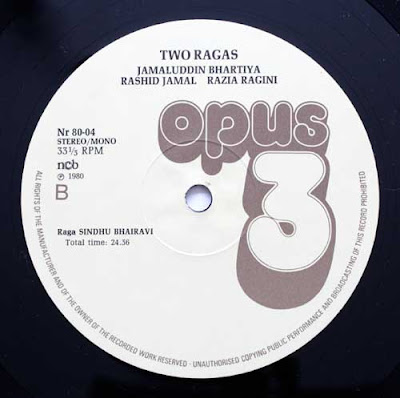 Here is a record that I had hoped would satisfy some of the urges of a senior editor at Panchamkauns who had an unquenchable thirst for the Ustads vocal meandering. He wanted almost desperately to hear him sing along with his sitar (which he supposedly does much better than Vilayat Khan) but unfortunately I cannot hear as much as a hum from the maestro. I'll post it anyhow and if someone else has a recording where we can hear him bursting into vocals, please share it with us here. There is one on Space Records SP 4, recorded in Amsterdam 1972 that I have not heard that may be a possible candidate. 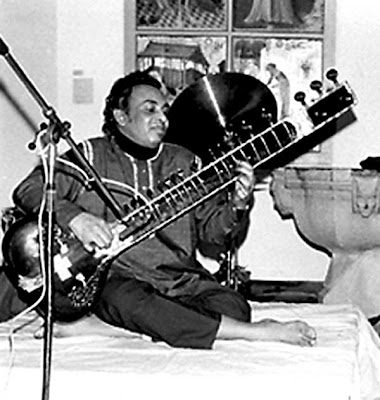 As it is very often the case in India, Jamaluddin Bhartiya comes from a family which has been devoted to music for centuries. It is his father Ustad Abdul Qadar Khan, a court musician in Sailana State, who introduced him to music. Then he recieved guidance in vocal music from the famous Ustad Amir Khan. But his main interest was the sitar; therefore he required Pandit Ravi Shankar to teach him, and had the honour of becoming his first disciple.

After having built a flourishing career as a concert and radio artist, Jamaluddin Bhartiya embarked on a new chalange; that of bringing the richness of the Indian musical tradition to the west. With the blessing of his guru Ravi Shankar, he established the Tritantri Vidya Peeth, a school for the teaching of Indian music and culture. Branches have been opened in Holland and Switzerland, and they attract each year numerous students from many countries.

As a performer, Jamaluddin Bhartiya is extremely appreciated, both in India and abroad, for the beauty aud profoundness of his style, in the pure tradition of the gayaki ang, as well as for the striking dexterity of his technique. 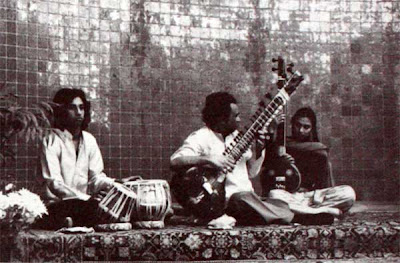 On this recording, he is accompanied by Rashid Jamal on the tabla, and by
Razia Ragini on the tanpura. 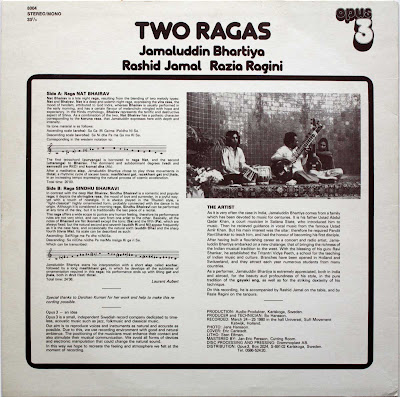 Here is that recording of Jamaluddin singing and playing, if anyone is interested. A nice, long Patdeep!

Hi panchamkauns, do you know what record that comes from, or is it an unpublished concert?
Will listen tomorrow...
I'm still not yet my own, but soon... ;-/

Just downloaded and did a search on my own disks. It turns out I had the same file since October 2007 but under another filename in a directory aptly named "loose tracks". Wonder where I got that, same bitrate. Maybe from you? ;-)

thanks a lot bolingo69 and panchamkauns for introducing the artist to listeners like myself and posting the wonderful tracks.

please do post any other recordings (if available) by the Ustad.

It is unpublished (and the sound quality is apt).

Thanks for bringing some lesser known artists to our attention, bo, and thanks to you as well, Panchamkauns for sharing the Patdeep.

I've been enjoying the Sindhu Bhairavi very much. A truly beautiful rendition. It makes one think of the artists like the Ustad here, who must have settled for a lesser fame than their well-known contemporaries, mostly because they didn't have any particular knack for, or interest in self-promotion. More likely the latter.

Dear Anonymous,
Multiupload link is expired. Can you re-upload plz.
Thanks