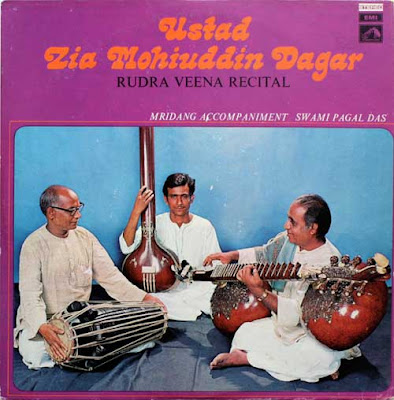 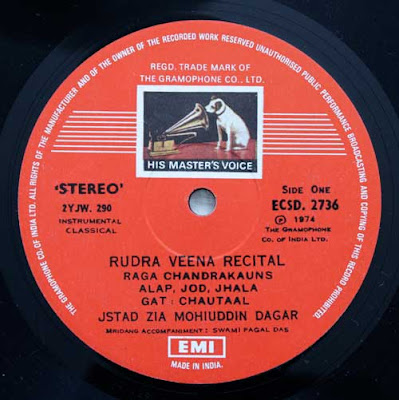 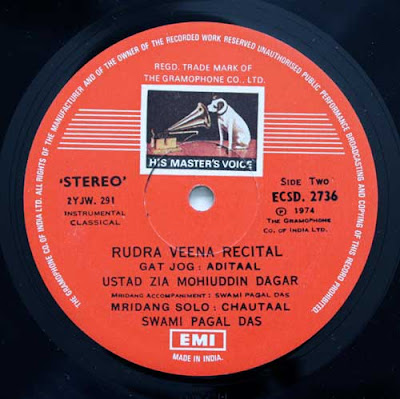 This post is more than overdue and to say that the influence of Ustad Zia Mohiuddin on me and many of my friends has been tremendous is almost an understatement. Not only because of his own music but also what it brought with it of other musicans in the family and its extensions as well as a tremendous inspiration to find out more about Indian culture as a whole. It is with so much profound joy that I listen to almost any vibrant note by his gentle steady pluckings of the been and it never fails to soothe my weary mind when it starts rambling.

A very good musician friend of mine, who met Ustad already in the sixties said, that he felt, that just being in the same room with him would slow everything down. Ustad did everything in slow motion just like his music developes in  one peaceful, yet forceful wave after another. Nothing in this world has such a steadying impact on my psyche. This is pure balsam for my soul. Of course again we will have to repeat that the LP format is not ideal for the grandeur of Ustads music, but we all know that fortunately there are other longer recordings to behold. But I hope that no one shall be dissatisfied with these first real post of the Dagar family traditions. There will be many more to follow and there is pages to write about this music, as has already been done. Search the net and I assure you that you shall find some more information.

On this compilation that I posted earlier here, there is also a very short track by Ustad to behold. 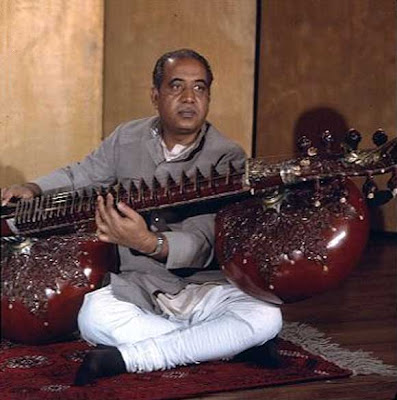 Zia Mohiuddin Dagar (14 March 1929 – 28 September 1990), was a North Indian (Hindustani) classical musician, one of the 19th generation of Dagar family dhrupad musicians. He was largely responsible for the revival of the rudra vina as a solo concert instrument.

Z. M. Dagar was born in the town of Udaipur, Rajasthan and began musical study with his father, Ustad Ziauddin Khan Dagar, court musician for the Maharaj of Udaipur. He was trained both in vocals and in the rudra vina, an instrument used by vocalists to practice melodies. The vina was traditionally not played in public, but the young Zia Mohiuddin adopted it as his primary instrument, giving his first recital at age 16. Although he was discouraged by his father from experimenting with the structure of the vina, he nevertheless modified the instrument after his father's death to better equip it for solo performance, transforming it into a larger bass instrument (sometimes called a Dagar vina): With the help of the instrument house Kanailal & Brother, he enlarged the tumbas (gourds) and dhandhi (hollow neck) to create greater resonance and to allow the notes to sustain longer and so better reproduce the techniques used in dhrupad singing. Because of these modifications, the instrument was too heavy to be held in the standard Northern posture (with one tumba on the left shoulder), so he played instead in the Southern posture, with one tumba on the ground and one on the left knee.
snipped from wikipedia here 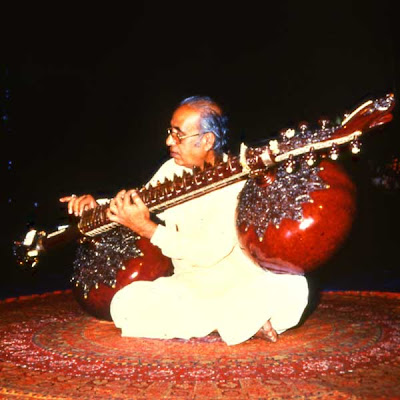 And by all means check this site out for more history of the instrument, and musicians. 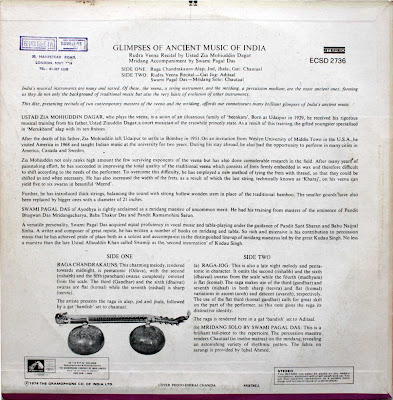 Thanks a lot, Bo!

i guess you were right, the sound of the veena is preferable over the sitar. i am amazed again at your selection and archive of records. hope to see more of this in the future. my interest in indian music just sparked again, since some of your latest posts. thanks for all your work.

tack sa mycket. ZMD has always been one of my favourites. only weeks ago i posted raga Yaman on my blog: http://panmietek.blogspot.com/2011/04/ustad-zia-mohiuddin-dagar-raga-yaman.html

Another great post of yours, Bolingo! Good to see you're back in India, even though I do appreciate all your turns and moves here.

thanks a lot, bolingo, for this music! i think this is the 3rd rip i have of the record, and it might be the best of all!

by the way, hans bosma (as recently as march) posted some recordings of the master that i did not know, here: http://lalogiqueinterne.blogspot.com/2011/03/zia-mohiuddin-dagar-binkar_17.html

the "novelties" are a mohankauns rendition from 1974, an exquisite yaman rendition recorded at moses and aaron from 1982 (3 years later zia mohiuddin and zia fariduddin would record the jugalbandi chandrakauns in the same place) and another yaman from 1990, live at the thoronet abbey - special sound to that!

All of the links to Dagar material are dead.

Is there any chance that these will be reposted?

Thank you! Not the 1st Z.M. Dagar for me but this made huge impression to me.