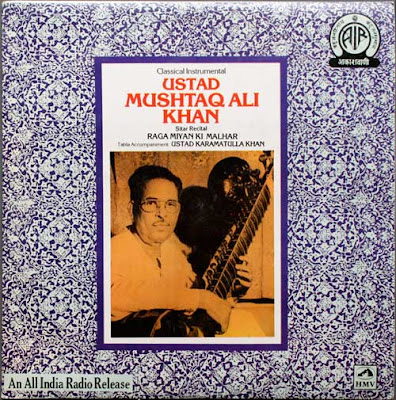 
Ustad Mushtaq Ali Khan was one of the few authentic exponents of the "Seniya baaj" on sitar. Son of late Ustad Ashiq Ali Khan, Ustad Mushtaq Ali was born in the holy city of Varanasi and started playing sitar from the tender age of seven. Under the guidance of his father, who was himself an accomplished exponent of both sitar and surbahar, the gifted son mastered the two instruments. He came into limelight at the age of 15. He shifted to Calcutta in 1924 and permanently settled down there till his last days. His "Raga" explorations were marked by highest degree of professional and artistic attainment. His approach revealed his uncompromising adherence to the ancient tradition. Each "swara" was full and pure, each phrase clear and well-defined and each combination, a vivid pledge. Authenticity was the keynote of his art and he never resorted to gymnastics or pyrotechnics, yet won the hearts of his listeners.

Official recognition came to the Ustad in the form of the Sangeet Natak Academy Award in 1969. This album of his comes as a cherishable acquisiton for the present generation and an equally precious bequest to posterity.

The Titan of the hallowed "Seniya gharana" (which traces its origin to the legendary Miyan Tansen) passed into history with the death of Ustad Mushtaq Ali Khan, at the age of 78, in July 1989. He was the seventh in line to Ustad Masit Sen. who was a direct descendent of Miyan Tansen. 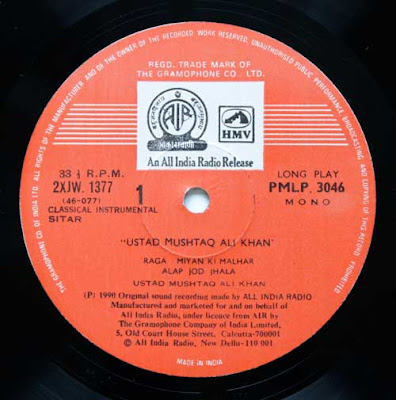 
This celebrated melody, associated with the rainy season, is attributed to Miyan Tansen, the court-musician of the Mogul Emperor Akbar. According to convention, the "Raga" can be rendered during any part of day or night in the rainy season, but in the remaining part of the year, it is sung or played around mid-night The "Raga" conveys a profound mood and it shines in all its dignity and grandeur mainly in the "Mandra saptak".

Ustad Muhtaq Ali Khan unfolds his "Raga" in "Alap", "jod" and "Jhala" movements on this side.

This side presents the continuation of the melody into a rhythmic 'Gat" movement first in the "Masitkhani" style and then in the "Razakhani" style. 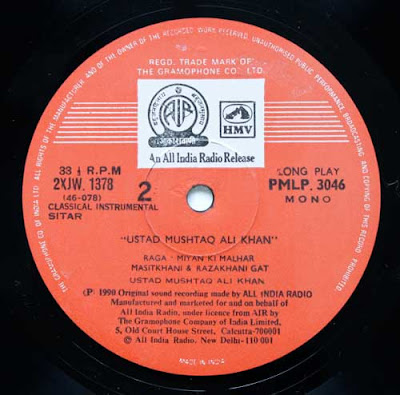 The descriptions above are a wholesale snip from the back of the sleeve. I have very few comments of my own except I myself also subscribe to having a strong aversion to gymnastics and pyrotechnics. I find much more comfort in the paced development of the raga. This record that I discovered a while back on the shelves of another good friend in music and possibly also a natural Luobaniyan who has a huge collection of wonderful recordings and to enter his abodes is like entering the caves of Allauddin. I knew that his collection, that is covering several walls, floor to ceiling, to contain some of the most precious recordings of Occidental savant music, but entering upon the topic of Extra-European art music he totally surprised me by leading me to a part of his collection containing several very rarely found Indian classical music records and a few I was not even aware that they existed at all. My deep thanks goes to my friend Tattar Jojje for lending me this, and some of the coming Indian classical records. 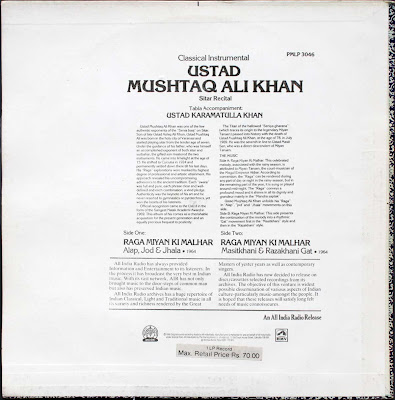 For the last few weeks, I've been enjoying a Mushtaq recording of Darbari, the "King of Ragas" and also the "Raga of Kings." I'm looking forward to the rainy season, but we gotta make it thru a very hot summer, first!!! I read in Ravi Shankar's *My Music, My Life* (1968) that Mushtaq truly represents the very old and traditional style, and that his playing strongly resonates with the 1800's, even. You know that got my attention... And speaking of the cave of "Allauddin," I'm sure somewhere out there -- maybe in the All India Radio vaults or the early home recordings of a radio broadcast as done by a private collector -- there are some examples of Allauddin Khan from before he was a frail old man? We've all had our appetite whetted by the stuff recorded in the late 1950's and early 1960's, or by those few (maybe a dozen?) 78's from an earlier period [not sure exactly when] but how about some extended examples of why Allauddin built & had such a huge reputation?

...all of which is to say: "Thank you for this post, its just the kinda thing I'll really enjoy!"

Hello and thank you very much for posting all of this wonderful music. I'm letting you know this as a dead link hope it can fixed for a re-upload.

Sorry for the long delay. New link has finally been provided …