Pt. Mallikarjun Mansur • A Doyen of the Gwailor & Atrauli-Jaipur Gharana 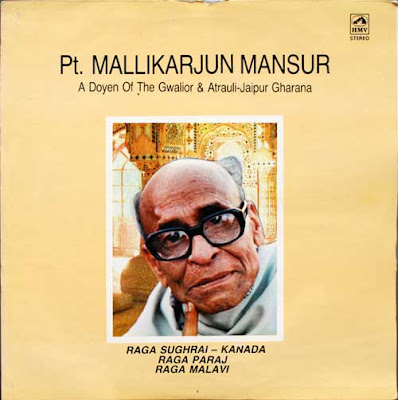 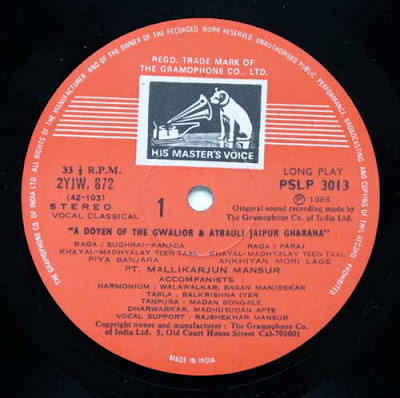 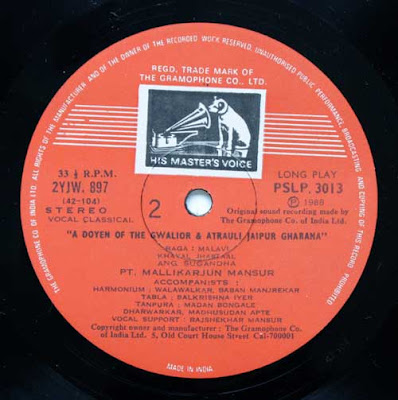 Since a very long time ago, when I first fell in love with the singing of Mallikarjun Mansur, it has always been such a great pleasure to find new recordings by him. I will post some more later and he was here before in an earlier post but only with one short track on a compilation. I am very pleased to be able to share this record with you and I hope you sahll enjoy this as much as I do. For me this is the real medicine for whatever ails you! Listen and you shall instantly feel much better... 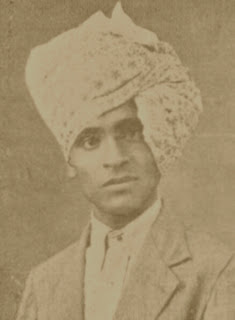 Mallikarjun Bheemarayappa Mansur (1910–1992) was an Indian classical singer of the khyal style in the Jaipur-Atrauli gharana. He received the three national Padma Awards: Padma Shri in 1970, Padma Bhushan in 1976, and Padma Vibhushan in 1992.

Mansur was born in Dharwad, Karnataka, in a poor family of cultivators. His father, a farmer by occupation was an ardent lover and patron of music, though he lived from a hand to mouth condition. Spotting the talent in his son, Mallikarjun's father engaged him to a travelling dance-and-drama troupe. As he hailed from the village Mansur, he was nicknamed so and this accompanied him for the rest of his life. The owner of this troupe took a liking to the tender and melodious voice of Mallikarjun and encouraged him to sing different types of compositions during the drama-performances. Hearing one such performance, he was picked up by Pundit Appaya Swamy under whom he had his initial training in Carnatic music. Sometime later, he was introduced to classical Hindustani music under Nilkanth Bua Alurmath of Miraj who belonged to the Gwalior Gharana. The latter brought him to Ustad Alladiya Khan (1855?- 1946), the stalwart and the then partiarch of Gwalior gharana, in the late 1920s, who referred him to his elder son, Ustad Manji Khan. Following Manji Khan's untimely death, he came under the tutelege of Ustad Bhurji Khan, the younger son of Ustad Alladiya Khan. This grooming under the Khan Brothers had the most important influence on his singing.

Pt. Mallikarjun was well known for his command over a large number of rare (aprachalit) ragas such as Shuddh Nat, Asa Jogiya, Hem Nat, Lachchhasakh, Khat, Shivmat Bhairav, Bihari, Sampoorna Malkauns, Lajawanti, Adambari Kedar and Bahaduri Todi, as well as his constant, mercurial improvisations in both melody and metre without ever losing the emotional content of the song.

HMV started to bring him in limelight following his success in some of the music conferences in the 1930s; most probably his first record under HMV banner came out in 1935-36. Initially, his voice and style resembled that of Manji Khan and Pundit Narayan Rao Vyas, but gradually, he came out of this influence and developed his own style of rendition. His mastery over the traditional and non-traditional forms of almost all the gharanas made him a favourite among lovers and patrons of Indian classical music from the 1950s. However, it was not until mid of 1960s that he became a household name. Scholars hardly differ on the purity and clarity of his note, the musical ambience created by his renditions and his dexterous handling of difficult compositions.

A simple and straightforward person, Pundit Mallikarjun was known for his innocence and ability to mix very easily with members of his fraternity and outsiders, especially, the younger folk. He was very liberal and open-minded in nature and trained a number of well known playback singers; as Arati Mukherjee recalls, one of his favourite song was "Raina beet Jaaye....." from the film "Amar Prem", composed by Rahul Dev Burman (1939-1994), which he used to hum rather often.

Like Pt Mallikarjun, Dharwad is home to other musicians like Bhimsen Joshi from Gadag, Gangubai Hangal from Hubli, and Basavaraj Rajguru from Yalival. "Mrutyunjaya", his home in Dharwad was converted into a memorial museum. 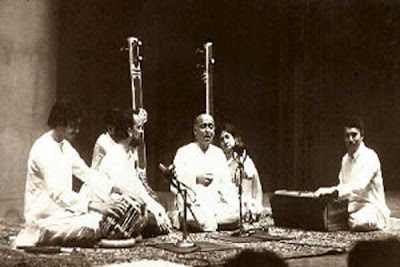 From the backside of the record sleeve we can muse on the following notes...


The name of Pandit Mallikarjun Mansur needs no introduction to those who are ardent lovers of Hindustani music. At 77, today, the maestro remains not only the oldest surviving exponent of the tradition, who is still active on the performing stage; he also happens to be the only titan of a hoary tradition - a crusader who has pledged himself all his life to protect and preserve his great inheritance in all its dignity and grandeur, its beauty and sensitivity, and its subtlety and charm.

Ardent connoisseurs of Panditji's "gayaki" will find that his music embodies a rare assimilation of three musical streams - the tradition of Camatic music and the two Hindustani "gharanas" of Gwalior and Atrauli-Jaipur. Behind this is his eventful and fruitful studentship with stalwarts of the eminence of Appayya Swami, Neelkanthbuva Alurmath, Manji Khan and his younger brother, Bhurji Khan. Side by side with his long and arduous grooming under the tutelage of so many illustrious gurus, he has devoted a life-time to perform his daily "riyaz" in the true spirit of a "tapasvin".

This is the secret behind his personality-bound style. He is gifted with a sonorous voice, known for its monumental depth and range. His singing reveals a keen sense of style and a keener sense of aesthetics. Whatever the "raga", he works himself into an intense mood right from the first "swara". Thereby, he establishes immediate rapport with his listeners. His passionate urge for self-expression and instinctive feeling for the artistic cast a hypnotic spell on his listeners.

If Panditji's "vilambits" exude uncanny unity of form and design, in which "alapchari" and the virtues of "bol" and "upaj" are so happily blended, his "druts", replete with intricate rhythms and complex, odd-shaped "taans" and "bol-taans" are pleasing to the ear, but baffling to the mind. What is more, Panditji excels in the rendition of well-known as well as less-known "ragas" with equal felicity, ease and skill. The repertoire of three rare "ragas", presented here, resoundingly brings home the "sui generis" character of the maestro's music.

(1) Raga: Sugharai-Kanada: This is a difficult and controversial melody. Conventionally rendered around midnight, it takes "pancham" and "rishabh" as its "vadi" and "samvadi swaras", respectively, while it omits "dhaivat" in "aroha". The "raga" is heard here through a "khayal" composition, set to medium tempo, in "teentaal" of 16 "matras".

(2) Raga: Paraj: This is also a difficult melody, rendered in the closing hours of the night It has a striking resemblance with the "raga Basant", and only acknowledged maestros can present it with complete authenticity. It is a "sampoorna" melody, in which "taar shadja" and "panchama" are the "vadi" and "samvadi swaras", respectively. The use of both the variations of "madhyam" gives the "raga" its subtle identity. The "raga" is heard here in a "khayal" composition, set to medium tempo, in "teentaal" of 16 matras.

Raga: Malavi: This, again, is a melody known for its intricate and complex build-up. It is a speciality of the Atrauli-Jaipur "gharana" and is rendered in the early hours of the night It takes "rishabh" and "pancham" as the "vadi" and "samvadi swaras". Broadly speaking, it embodies a blend of the "ragas", 'Hindol" and "Bibhas". The "bandish" sung by the maestro is a "vilambit khayal", set to "jhaptaal" of 10 matras. 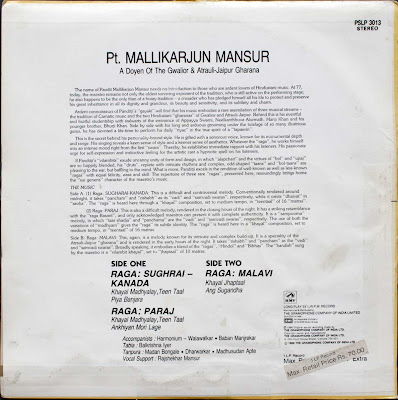 Thank you so much, bo! This has made my day, and most probably my week as well!

Always happy when you are happy Arvind!

I on the other side have to make my night soon ;-)

Still up burning the last fumes of the midnight oil!

The press release and the articles I am writing for the singing insect exhibition is almost ready. Tomorrow is the last day of editing and finishing touches and then I hope to get more time for posting here. It should clear up in a few days I hope! There are so many more things I want to post!

Continued thanks for all the great records you share so generously, bolingo! Much appreciated, as always!

This is such a fantastic record, by a great artist! Thanks very much, bolingo ji!