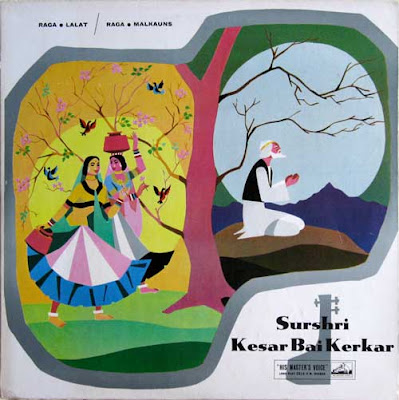 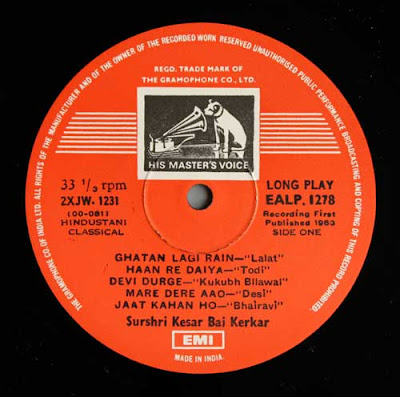 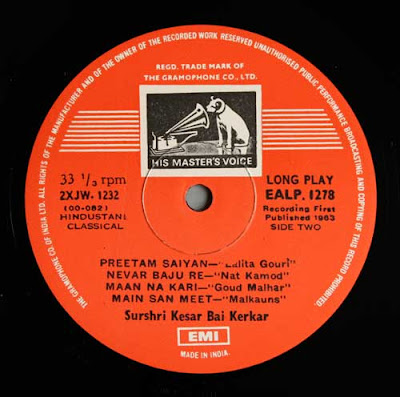 There are so many wonderful artists I would have loved to post already and after the comment I made in previous post it sometimes feels as if they are all overdue. It will come as a surprise to no one that one of my first loves of Hindustani female vocal was Kesarbai introduced to me by a very good friend who passed on already long ago. I may have mentioned her already in one of my first posts. Yet, I have not had the decency to post anything by her so far. This record, or at least the music on it, may already be in possession by most of you, and so it should, but in case of an unfortunate possibility that it has still been missed by one or two, this shortcoming has now at long last been remedied.

This is one of the very first records I heard of any Hindustani vocal and that I have played the most in seventies.  Very soon, I also just have to fix the flagrant Paluskar deficiency we have been suffering from here. 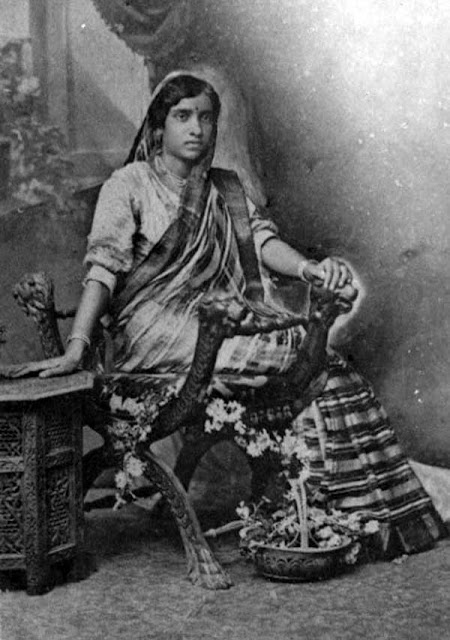 North Indian vocalist. She was attracted to devotional music as a child and began her training at the age of seven with Abdul Karim Khan of the Kirana gharānā. She later studied with Barkatullah Khan, the court sitār player in Mysore and Patiala, and Bhaskar Rao Bakhle of the Agra gharānā, and, most significantly in terms of musical style, with Ustad Alladiya Khan (1920–46), who stipulated that she should always sing with him at concerts. She remained with him until his death in 1946, when her solo career began. She inherited the style of Alladiya Khan, including melismatic tān in performances of khayāl and a preference for improvisation in Tīntāl. She also sang thumrī. 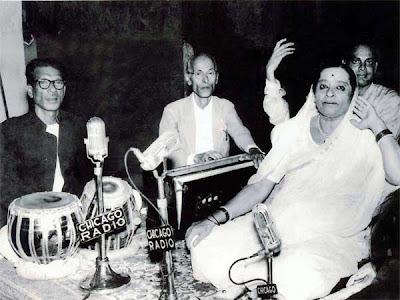 
She was dubbed (Sur śrī) in 1938 by Rabindranath Tagore and was known thereafter as ‘Queen of Music’. In 1953 she received the President’s Award for Hindustani Vocal Music from the Sangeet Natak Akademi, and in January 1969 she was awarded the Padma Bhushan by the Government of India. 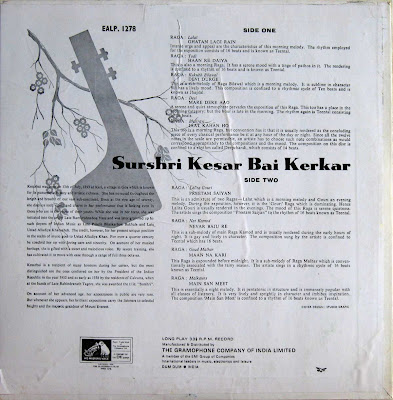 Seems the blogspot troubles continue. I'm unable to post through my google id, but posting as anonymous works :)

At first glance, I can see there are a number of songs here I haven't heard yet. Thank you very much for this and for the earlier instrumental records (some of which I will listen to later...vocal comes first for me too!)

Amazing records one after the other!

Anonymous as for your requests I see what I can come up with. Two are obvious as they were already in line edited and ready but I can let them jump the line. One almost certainly I'll post it today and you will see and it will make Arvind happy as well ;-)
Since I am not posting anything from CD's here the other two are unlikely to happen here. I am quite sure that there are no Bahauddin on vinyl but if you buy more of his CD-records we will have more good been music to listen to in the future ;-)

As far as Balram Pathak goes I am not aware of any vinyl with his name on it nor do I have any K7 by him. I only know about the Ocora CD, maybe that was also out on LP but I don't have it. Sorry!

Anyhow there is soo much good music we have not yet covered so there will be plenty to go around for all of us ;-)

Ross! I hope I will never run out of good music to post here ;-) The only problem is competitive time measuring. Luobaniyan time sometimes gets taken over by the Julian and otherworldly time has not yet made itself manifest. But, anyhow time is an illusion, and I should know, I have a deadline to meet that I am running from, and it still keeps getting closer ;-)

Thank you releasing these gems on us, an unsuspecting and probably undeserving lot! :)

the sound quality you conjured from this lp is markedly superior to most any cd i've heard. pearlesque vocal comes first fer me, three

All this five-minute stuff is like Bruce Lee’s finger pointing to the moon. Four moons, even: Sangeet Kendra’s 4-CD set of proper live recordings of Kesarbai — that’s right, her true musicianship on display!

Granted, the sound is not always up to par. But there’s a Bilawal where it’s not altogether in the toilet either. This Bilawal runs 30 minutes long. And I’ll be damned if I have heard any better music.

Not to rain on the Love Parade, but just in case someone hasn’t heard it ...

Bo, as for Balaram Pathak the Ocora CD was a double LP before - and had one extra raga not reissued on CD. I had a cassette recording of it, but that is gone, unfortunately.

The variety and quality of recordings you so generously share is truly awesome! A thousand thanks, a thousand times over!