D.V. Paluskar • Raga Shree and some plates reissued on LP 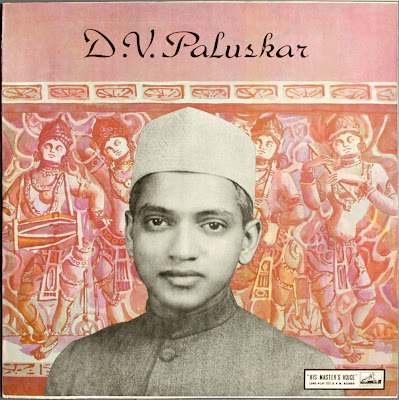 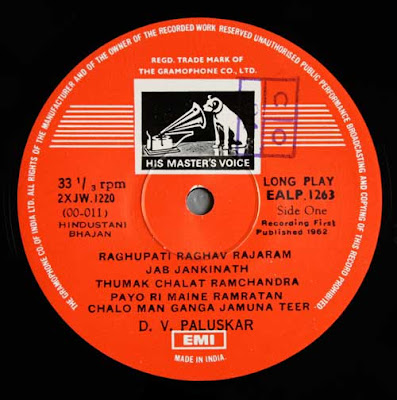 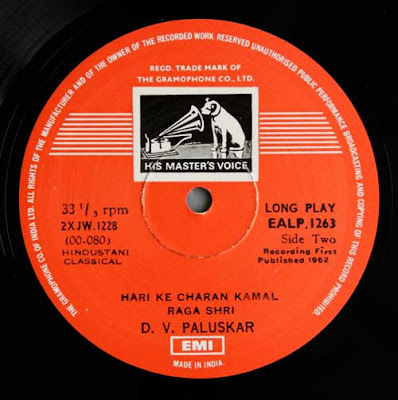 Pandit Dattatreya Vishnu Paluskar (May 28, 1921 - October 25, 1955), was a Hindustani classical vocalist. He was considered a child prodigy. D.V. Paluskar gave his debut performance at the Harvallabh Sangeet Sammelan in Punjab at the age of fourteen. He inherited the Gwalior gharana and the Gandharva Mahavidyalaya, but he was always open to adopting aesthetic features of other gharanas and styles.


He had a very sweet and melodious voice. His alap clearly outlined the raga he sang; this was followed by the bandish embellished by beautiful taans in an effortless enchanting style. He was a master at presenting an attractive and comprehensive picture of a raga in a very short duration. He cut his first disc in 1944 and visited China as a member of the Indian cultural delegation in 1955. Besides pure classical music, he was also a great bhajan singer. He introduced the famous bhajan "Payoji Maine Ram Ratan Dhan Payo" to the modern generation. He is also famous for an unforgettable duet with Ustad Amir Khan in the film Baiju Bawra. The only other film he sang for was a Bengali film called Shaap Mochan.

D. V. Paluskar was gifted with a rich and melodious voice and the recorded performances he has left behind are replete with many a graceful pattern of skilful workmanship. On one side of this record is offered a classical exposition entitled "Raga Shri" which the artiste recorded barely three weeks before his death and which remains the last recording of his brilliant though shortlived career. The other side comprises of selections from his standard records on different themes all devotional in character and rendered in a light classical style.

from the liner notes on the back of the sleeve

So, I said that there was a severe shortage of D.V. Paluskar here, as he was not even represented on this compilation here earlier with all sorts of other greats, it is really a shame! But here is a more comprehensive collection and together with the next post it will at least make up for some of my previous negligence.

Also, I feel I must explain to the more hardline ICM listeners and the veteran rasikas that I really intend this place to be some kind of archive for music that is about to fall into oblivion at least among the many that maybe even never were touched by this wonderfully rich traditions.

So, I will keep on posting some records you already have, or have already heard . I find it impossible to post only extremely rare recordings because it would not do justice to this increadibly rich music tradition. There is no shortage on rare records to post but to the many even this D.V. Paluskar is rare, even in India.

Also, if I can make some of the "dub steppers" and "drum and basers" and "hip-hoppers" and "shufflers" (there are two of those in my house) or anyone else of the younger generations, to get in the slightest interested in any of these recordings, well, then at least a part of my mission is done. Especially now when they have discovered vinyl records and think tube amplifiers and open reel tape recorders are really cool ;-)

I hope that those of you that already have this record have not forgotten how wonderful the voice of Paluskar is, and still would consider giving it a spin (or a decoding as the case may be), and that those of you younger kids that maybe just thinks he has a funny hat, will still stop for a moment and listen.

I hope you enjoy! 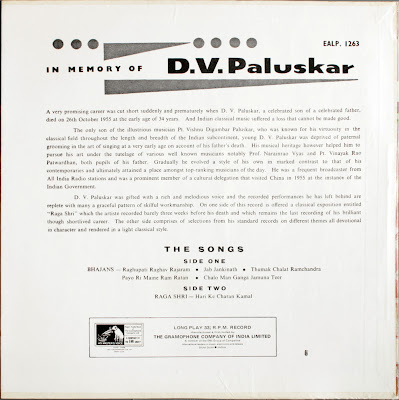 Some wonderful singing here! Thanks for the record, Mr.Bolingo!

Somehow, I envy all the young kids (and the old ones too) who can't for the moment see beyond Paluskar's "funny hat". Those among them with open ears and hearts are about to discover the warmth and beauty of Paluskar's singing for the first time!

Bo, your description in the next post reminded me of my own feelings on hearing his bhajans (featured on this record) for the first time. For a fleeting moment, I felt all was well with the world, and that all would continue to be as long as this music was playing.

Sir need the songs badly.
Links are down.
Please re-upload or mail to hemdutt110040.hd@gmail.com
will be very grateful.

RabidShare keeps messing iwth default settings of privileges so one has to manually reset them over and over again! Damn nuisance! They could save ones global settigns before they muck about and then restore them to each accounts preferences.

Anyhow, do nit despair, the links should be working again …