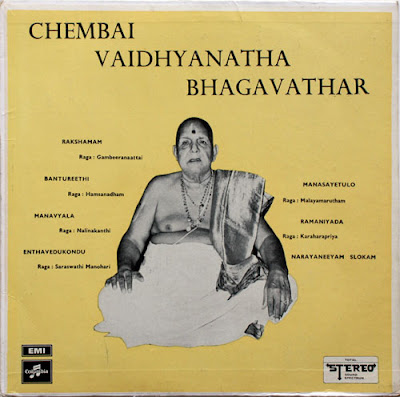 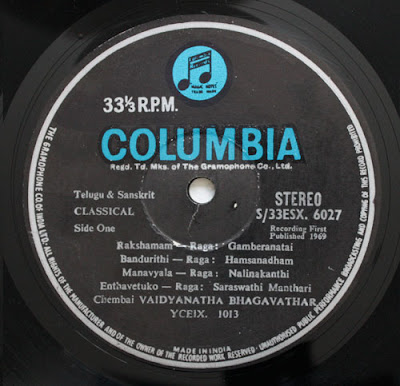 Continuos tracks as on the LP, total time 21'10

Continuos tracks as on the LP, total time 22'55 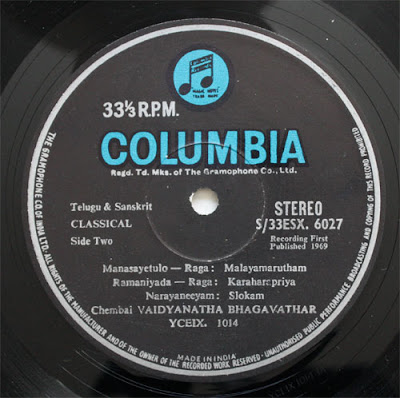 Here is some more great singing by Chembai who came from a family that was in the musical tradition for more than 500 years. Born in 1895 and performing for the first time already 1904 when he was only nine years old. By 1920 he was one of the top singers and T. Chowdiah the famous violinist adored him and for a long time they were a great combination together. When he was at his peak he was considered one of the three pillars of Carnatic Music along with Ariyakkudi T. Ramanuja Iyengar and Maharajapuram R. Visvanatha Iyer.
In 1932 he cut his first disc for Columbia and went on to record a great many "plates" for them, also this LP is on that same label. He was said live very frugal and to have been very generous spending most of his earnings supporting the temple of Guruvayurappan after a wow he had taken when an ayruvedic doctor had restored his voice there. Many were the musicians who got their first break with him and among the ones he helped along the way was two mridangam players first Phalgat Mani Iyer and later Palani Subramania Pillai both went on to become very famous. The latter may very well have been saved by Chembai as he was left handed and had a very hard time getting concert engagements because of the traditional placement of the musicians on the stage. Very few violin vidwans would accept to sit on the left side of the stage counted from the audience as neither their bow technique nor their visages would be on a favourable display.

Chembai had indeed a very long career and this record is from his last period when he came back after a longer retreat from recording and poor health only allowed him a few more years to live. He died on October 16, 1974 in Ottappalam where he had given his first temple concert. On the last day of his life too, he gave a superb concert, comprising his favourite songs in the same temple. At the end of this, as he sttod in the sanctum an admirer is said to have remarked that the Bhagavatar should live for 125 years, Chembai turned around and said that it was a matter between him and his Maker and that it had already been decided. Having returned to his place of stay he sat down for his evening prayers and passed away during the meditation. His grieving wife followed him six months later.
(Most of the above info culled from Indira Menon and Sriram V.'s writings on Carnatic Music) 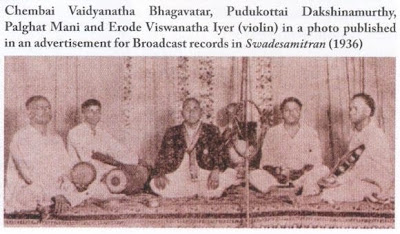 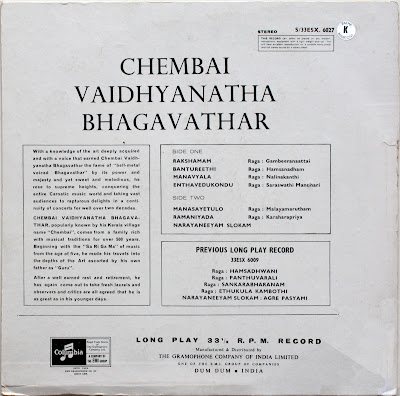 and they keep coming...

one after the other...

unless you have other plans...

Thank you for showering us with one gem after the other, Mr.bolingo!

Chembai Bhagavathar has been a revelation for me, such a sonorous voice. Thank you so much for your tireless efforts, bolingo..I owe you one!

You are all welcome to share Chembai with me as I am particularly fond of his big and warm voice.

Miguel, thank you for your kind thoughts!

However, I don't like to have a final measure on my life as I don't subscribe to chronopetimetricalitiy (jsut being spiteful towards the spellchecker :->) I hope my "best before date" will not come to soon and I am futilely hoping that my creator will not call me until I am "ready"!

I continue to embark on journeys that much younger people would hesitate in front of, given the time same said projects are bound to take. Constantly starting projects with an unforeseeable finishing line are just a means to longevity in my perception and believe! A "constant" heart always helps though ...