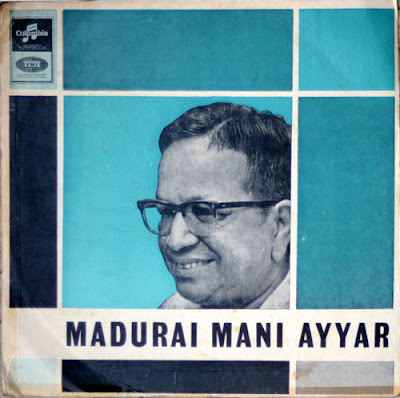 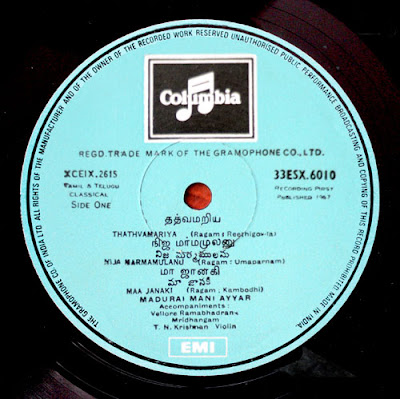 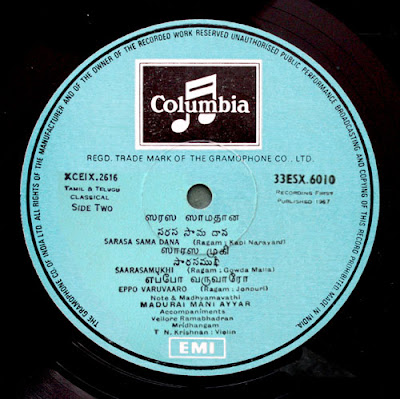 I see no over saturation of Mani Iyers music anywhere on the net, so here is the LP that came after the one I just posted yesterday. The preservation and digital likeness is this time a joint venture of the "south indian vinyl trinity" like we had before with an LP of the Sulamangalm Sisters. The good Arvind spotted it, secured it, and passed it on to good Costis who got down and made a real nice digital likeness that he in turn passed on for me to fiddle with a bit. Photos and rip are his! Twiddle and fiddle are mine. Slight de pop editing and slight photo editing. The music is for everyone who has heart and ears!

I like to point out the last piece on the B-side "Note" that goes into the Madhyamavathi. It is of course the least typical of the Carnatic repertoire and always stands out and seems still to be rather popular. It is a rather amusing and enjoyable relic of the British rule in South India. "Notes" can often be heard in Nagaswaram music and some vocalist like Madurai Mani Iyer did nurture the tradition of "notes" or "English Notes" as they were also called. The wonderful clarionet player A.K.C. Natarajan also has a very nice repertoire of "notes".

The influence from annotated english music, like march or dance tunes is obvious and speak of a time when indian musicians would have to also include western tunes in their repertoire to satisfy the English Raj. Some were played for formal functions and ceremonial reasons some for pure entertainment. Originally they were simply English tunes played on traditional South Indian instruments. In fact, some are simply Western tunes with Indian lyrics, but even though you can still sometimes here tunes like "God save the Queen" and "He's a Jolly Good Fellow", oftentimes it is however futile to look for the "english original" as there is none! Many "Notes" were composed by Indian composers and musicians in the vein of, or to resemble the original Notes. These are compositions often in the raaga shankaraabharaNam and created with swaras (some also have saahitya=lyrics).
Read some more about western influence on Indian Classical Music here... 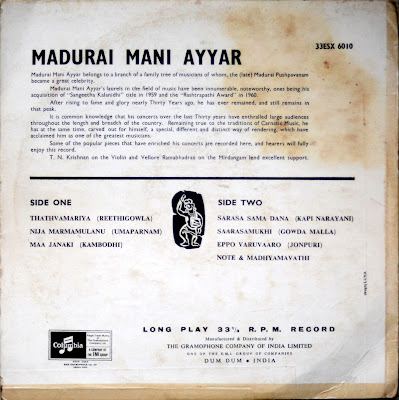 You are welcome aj nabi!

A thousand humble thank you's for this wonderful music. Mani Iyer is another great find for me!

Thank you for these gems, I'm thoroughly enjoying them and in general, this run of carnatic music. I was under the impression all these years that north indian music is more interesting, but your recent uploads have opened up the hidden (at least for me) world of south indian classical. Such beautiful and positive vibes here!