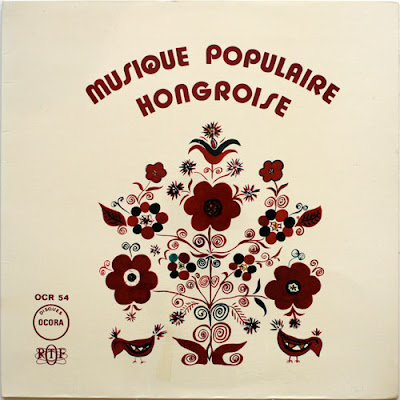 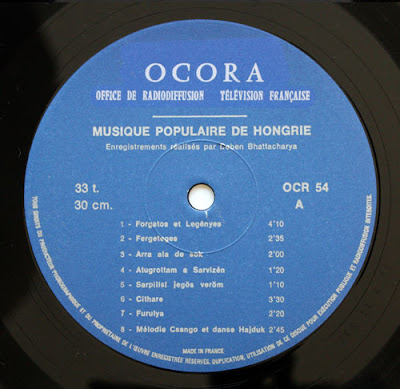 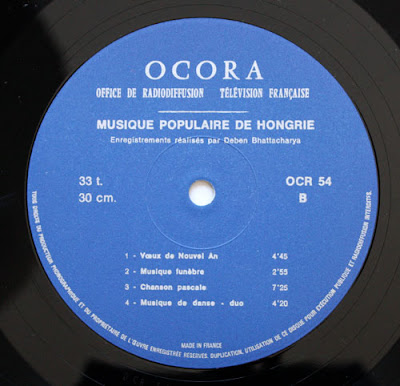 Here is the Ocora with Deben Bhattacharyas recordings from Hungary. The recordings are like I said in the previous posts from the same period as the Argo, Caprice and Musidisc and in many instances with the very same musicians. I also mentioned that the Ocora and the Caprice were not that well recieved by some musicologists. Here is a review that appeared in the Ethnomusicology Vol.17 No.01 p. 144-147 (that is in the Review section)

After such monographs as Bartok's Hungarian Folk Music (Oxford University Press, Oxford 1931) and Kodily's Folk Music of Hungary (Corvina, Budapest 1960) we should expect folk music records in this field to be composed upon high scientific foundations, with authentic melodies rendered by authentic performers. In fact, an imposing series of records were brought out between 1937 and 1944 ("Patria" 78 rpm discs, 125 items) under the supervision of Bartok, Kodaly and Lajtha. These being no longer available in postwar times, there was a lack of commercial records until 1964 when the Folk Music Research Group of the Hungarian Academy of Sciences presented conference members of the International Folk Music Council with the first LP disc, followed later by a set of 4 which will be continued up to a total of 16.
Although folk music does not provide the traditional accompaniment to agricultural or other working activities of the Magyars, today lyrical and epic songs performed by old and young on such occasions as weddings, family and social meetings or those of the calendar days-not to forget fervid church singing- reflect truly the deep musicality of the people. Making up a record representing the manysided, rich Magyar tradition performed in authentic style, will remain a thankful task for a good while for the connoisseur while being a dangerous temptation for the enthusiastic foreigner.
The danger lies in the technical possibilities of the average visitor equipped with a solid apparatus and helped by attentive hosts which is not balanced by professional knowledge of the recorded material or by expert advice about it. Such visitor recordings made as souvenirs by their owners do no harm to anyone, but if published, the owner must accept responsibility for
the false information, particularly if the disc was edited without scientific preparation.
The present disc is not the author's first one in the field of Hungarian folk music. Its contents are similar to that of Musik Från Ungern, a record edited a few years ago by Rikskonserter (The National Center for the Popularization of Concerts in Sweden). Though many of the pieces showed garbled versions and gypsy songs of the worst sort, by all accounts the latter attempted to represent true folk music, while three Bands on Side A of the OCORA disc contain only pseudo-folk music performed by amateur town people not content with a possibly accurate imitation of folk music performance but producing a really nonprofessional arrangement of their own instead.

The beginning of Side A, Bands 1 and 2, dance tunes from Bukovina and Transylvania, both in Romania, and the north east of Hungary, is not at all inviting. After an introduction of undefinable style, the dancing of an amateur group (they do not utter a cry or a word!) is accompanied first by a lute, going back to its earlier use in Hungarian Transylvania, then by two dulcimers (nowhere in the country played in pairs) or by a string-trio. The latter fits in the set-up, only it is weak in rhythm. The same is to be said of the singing of the transdanubian peasants on Band 3: no strength and precision which are otherwise so characteristic to the singing of new style songs all over the country. On Bands 4 and 5 they gradually perform better.

Bands 6 and 7 bring two series of short melodies-mostly of the new style-one played on a zither, the other on a little six hole flute, both by a shepherd of the same transdanubian region, a very mediocre performer who begins the last two tunes of Band 6 (c-d) and the last one (c) of Band 7 defectively, hunting out the right tune for the second or third time only.
(This should not, however, be confused with an improvised introduction which is unknown in Hungarian practice.)
The Moldavian dance tunes (csango) of Band 8 (a-d) are played again on the koboz lute, arranged in a somewhat rondo-like form and followed by "Hajduk dance music," more correctly titled "Ungarescha" from the organ tablature book of J. Paix, (Lauingen, 1583) which is, unfortunately, not part of our folk music repertoire.
Side B is entirely devoted to the csango tradition, Bands 1 and 3 from Moldavia, Bands 2 and 4 from the Gyimes region (both in Romania), the Moldavian part having been recorded from repatriated csango's in Transdanubia.
The New Year's greeting on Band 1, an ancient fertility rite, is performed in the same way as the Romanians of Wallachia and Moldavia in their plug, pluguor, buhai, etc. (see Antologia Muzicii Populare Rominesti, disc 4, Electrocord EPD 1015). Its origin remains to be clarified.
The heading "Funeral Music" of Band 2 marks the function of his beautifully sounding violin piece: at wakes and laments the once favorite plaintive song of the deceased can be heard as a "plaintive song beside the corpse."
A csango religious song for the Holy Week, the "Greeting of the Holy Cross," Band 3 could have been the best recording on the disc. It is a great pity that the performer, otherwise one of the best western csango singers, begins the first stanza with the repeated 3rd and 4th melodic lines, thus confusing the musical form of the simple 4 line stanza.
Band 4 closes the record with dance music performed by an old Gyimes csango couple playing the violin and the gardon. "The gardon is . . .carved out of a piece of log. . . in the size and form of a violoncello. . . . The strings are sounded by means of a stick of about 50 cm length and the thickness of a broomstick. The beats delivered by means of this stick are combined with a
kind of pizzicato effect produced by plucking the strings and clapping them against the board" this reviewer wrote in the notes accompanying the anthology, Hungarian Folk Music (Qualiton LPX 10095-98).
Concerning the accompanying descriptive notes: the above quotation may indicate to what extent technical and-what is more important-musical notes ought to have been incorporated. For example, information about aksak rhythm in Hungarian folk music would have been a valuable addition about the above piece and would make this music more comprehensible to the foreigner, in particular the series of songs performed on instruments. A short introduction tells the essential about Magyars and the migration of the csango group to Moldavia. From the texts only that of the New Year's greeting has been given in translation.
"It is easy to take OCORA for granted simply because through half a hundred discs available now its standards have remained consistently high and its presentation attractive as well as careful," to quote Alan P. Merriam in ETHNOMUSICOLOGY, XVI (1) 1972, p. 146, in his review of OCORA OCR 48. Listening to another OCORA disc, Musique Celtique-Gaelic Music (OCR 45) and reading its notes this reviewer fully agrees with Merriam. So much the more regrettable not to be able to include this record within the framework of that statement.

So, far the reviewer! The bold face above is mine to mark the part that I wonder about the most. Is this some purist attacking or is the music substandard and not representative for the traditions it is supposed to represent. Any comments are welcome! I understand that Folkcatalogue has a read positive review on the Hungarian Argo that has similar material, and that there is a similarily positive review on the RIKSLPX2 Folkmusik från Ungern. Please correct me if I am wrong, I will add them to the previous posts once I have located them. 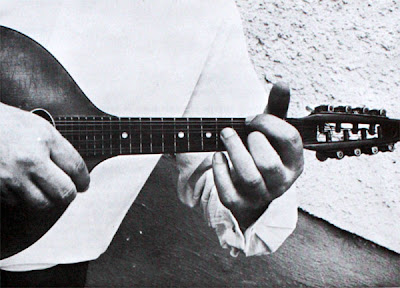 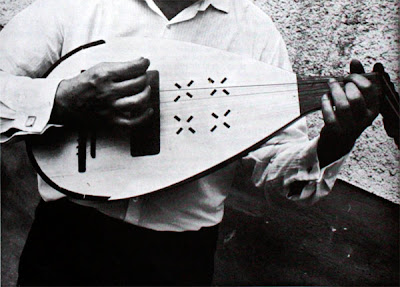 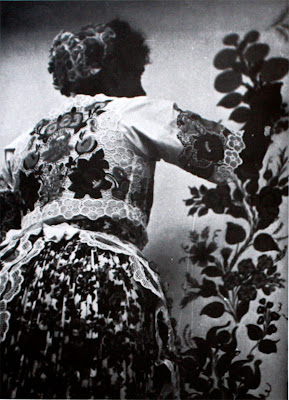 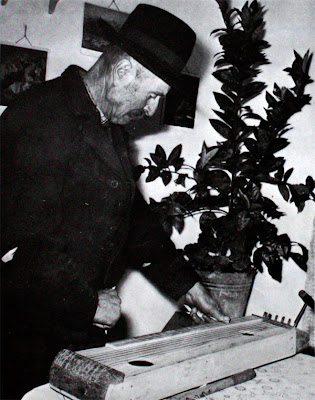 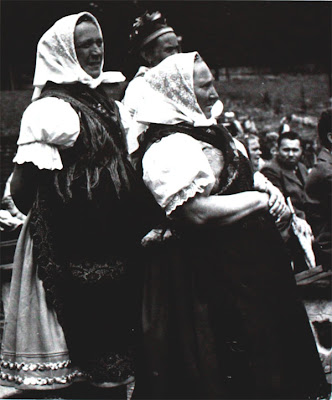 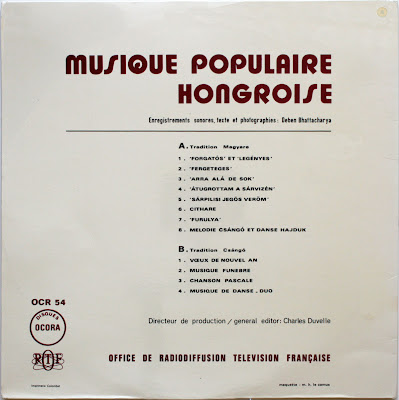 Don't you think this reviewer is an idealist, convinced he is able to locate pure, unadulterated ethnic music in the field, while folk music has always been a matter of hybridization and cross-pollination. Some Wagner enthusiasts tend to think this way, too, but there can't be a musician who doesn't want to introduce some novelty in his music, at least as a
provocation to his folks.

i don't care what that bloke from ethnomusicology says, I want one of those bikas on B1.

Have got a bit confused now about the Csangos DB recorded. Not clear why they were in Hungarian towns and villages like Mekenyes and Sarpilis a long way from "home" in Romanian Moldavia, where DB later visited in 1965.

Had they fled? Haven't come across any DB recordings of Csango stuff from Romania. Maybe he wasn't allowed there. Anyone any idea?

I like the way the selection process goes for these Hungarian albums. On the Argo one they've got the Csaba Palfi band doing a two cimbaloms version (oh, no! not two cimbaloms! that's not part of the tradition!) of Fergeteges and you can hear the dancing. Here they're doing the same dance, but with no dancer (which the reviewer slags off, as well as the extra cimbalom).

On the Argo Kelec Joszef plays his swineherd tunes on the furulya sans pig, here they're so close to the mike you can almost touch their snouts.

Just because their home is Csángóföld... thats why. Interesting isn't it?