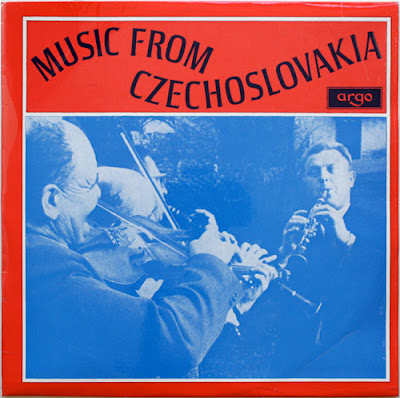 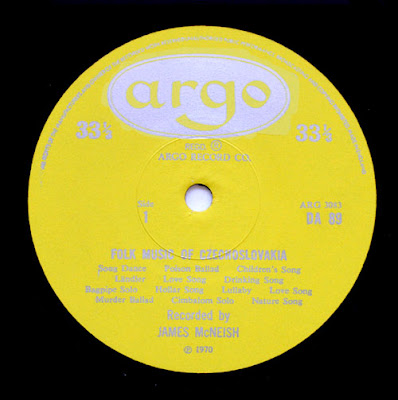 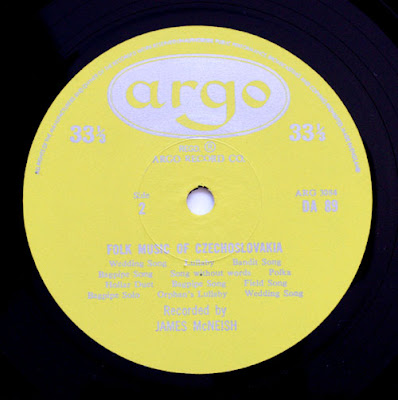 IT is said that Karel Plicka, the, indefatigable collector of Slovak melodies, amassed in his lifetime some fifty thousand texts and tunes. When it is considered that Slovakia in size, and population roughly represents only a third of Czechoslovakia the statement even if exaggerated, gives some idea of the musical resource of that country. Had Plicka devoted himself to Moravia or Bohemia instead, his rewards would probably have been as great.

Plicka's energies were at their height between the wars. And today?

In a corner of southern Moravia, to take one sparsely populated valley on the Velička River where I recorded in 1966, there are still two hundred individual Folk musicians of repute. In southern Bohemia young girls will stroll into the country, exchanging songs all day, and return at night without having repeated themselves

In mid-Slovakia, marooned in a rundown school under the Tatra Mountains, I encountered a young schoolteacher who began singing work songs at nine in the evening and was still singing, far from exhausted, at three the following morning.

A portion of the music of these three areas is reflected on this disc: a highly personal choice resulting from two postwar field trips. In these areas alone there is a complex of regional expression, enriched by western and eastern cultures, sufficient to occupy a team of ethno-musicologists for a lifetime. From the sleeve notes by James McNeish...

These field recordings were made in 1960 and 1966 by New Zealander James McNeish. McNeish is an interesting character. Born in 1931 in New Zealand, he did a BA in modern languages, taught a bit, then, in 1958, worked his passage to Europe on a Norwegian freighter.

He became a fireman at Joan Littlewood’s Theatre Workshop and, after a spell teaching in south London, set off around Europe in 1959 with his first wife, recording folk music. He recorded in Poland, Czechoslovakia and Hungary before landing in Sicily in 1960, where he stayed two to three years.

Back in London (1963 or 1964), he turned the Greece and Sicily recordings into two series of radio programmes for the BBC’s Third Programme. Two people from Argo sat in on one of the programme recording sessions, “got excited by what they heard and commissioned a disc”, he remembers.

The Sicily recordings – Sicily in Music and Song (Argo DA 30) – and this album got a simultaneous release in the UK and the USA in early 1965. A later Argo LP of McNeish recordings – Folk Music of Czechoslovakia – was one of reviewer Brian Rust’s albums of the year in The Gramophone in 1970. "A model of its kind, instructive and delightful."

quoted from Folkcatalogues excellent blog some more to read about McNeish and Argo there!

I choose this one because it fitted with the previous post. I will post the Greece, and Sicily albums mentioned in the text a little later but first there are still some more Deben Bhattachariya coming... 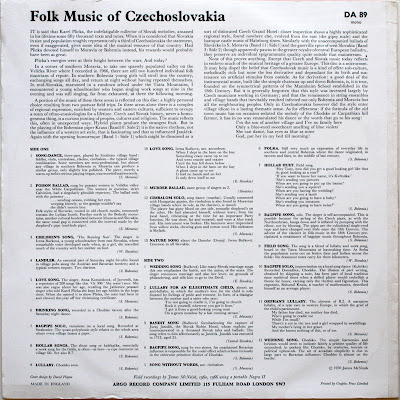 Fantastic album, really loving it! Thanks a lot, bo for the ongoing excursion through Europe, many good musical finds for me these last few weeks.

Most happy to see you back here, and that you find something to please your taste! We shall have some more European encounters before we head back to India with the help of Deben and it is high time to start posting the South East Asian Bärenreiters. Several are ready to go I just have a bit limited time these days to be able to do half of what I would like to do! Anyhow it seems that we are under no risk to "run dry" ... So much music and so little time. Then all the Tervuren African ones...
I can hardly wait ;-)