Music of Oceania - The Abelam of Papua Niugini 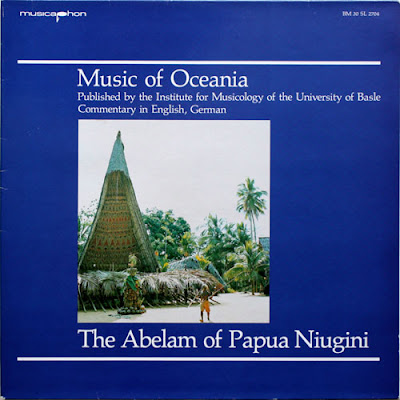 Music of Oceania: The Abelam of Papua Niugini 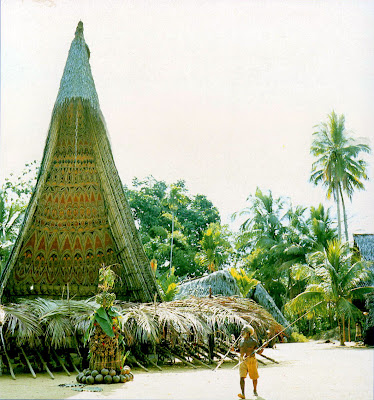 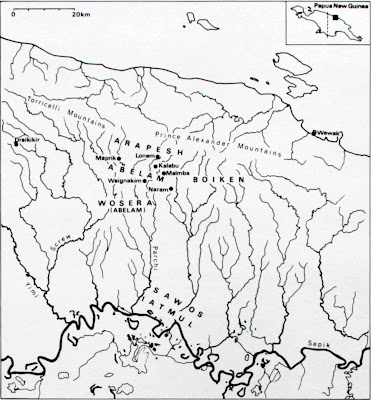 Map of the region in north east Niugini showing the area where the Abelams live. 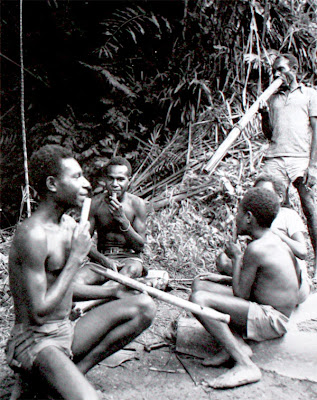 Different kinds of the bamboo tubes are used to make flutes and whistles. 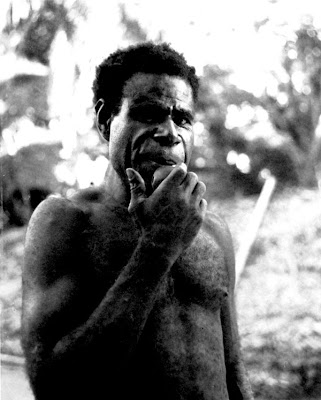 The Ocarina is an instrument regarded as a voice of the spirits. 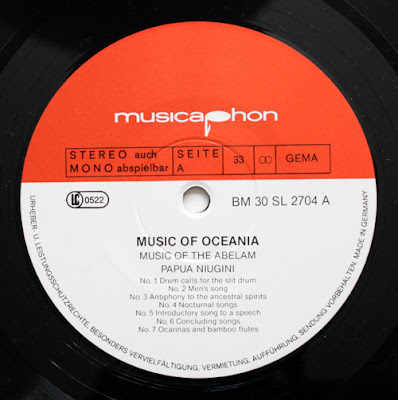 Music for building and consecrating the ceremonial house. 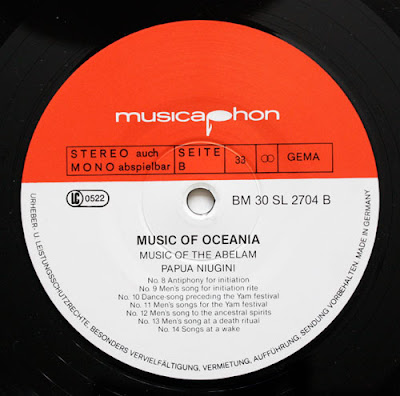 At last I have the little extra time to post the recordings of the Abelam. It is last LP in this series, and I really have to post it, or we will never get started with all the records in the South East Asian series!

Anyhow here it is and I hope you find it as interesting as I do, I think it is one of the better. There is one more record, but it is a CD and I have so far not posted any such but it is available on another blog. You will find a link in the discography here. 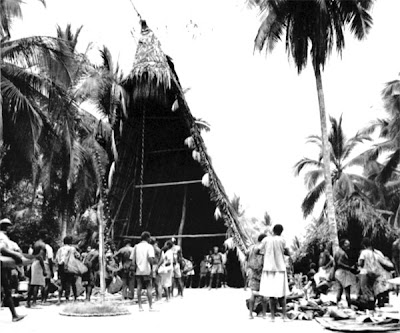 The celebration of the erection of a ceremonial house. 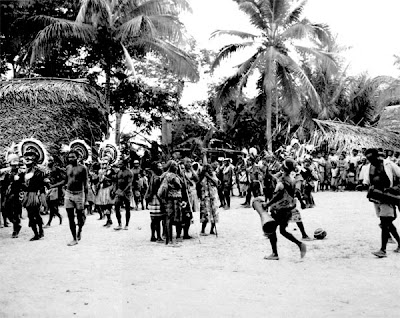 Initiation where the novices come to the ceremonial ground richly adorned. 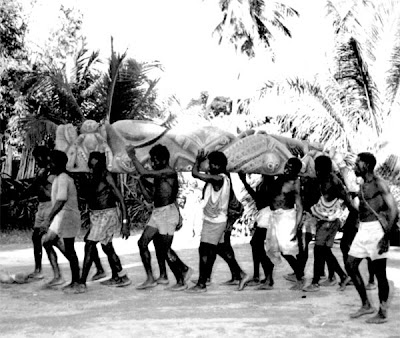 A sacred nggwalndu carving being transported to the new ceremonial house. 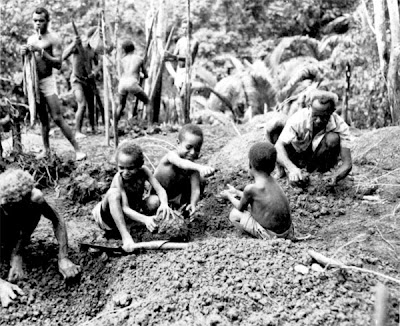 All the males inhabitants help to cultivate the yam gardens. 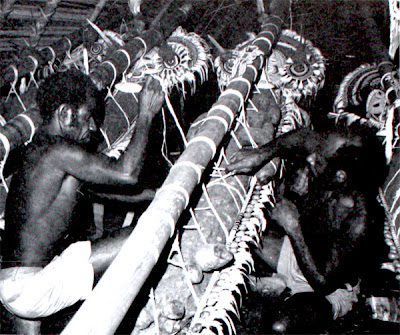 The finest specimens of ceremonial yams are decorated for the display. 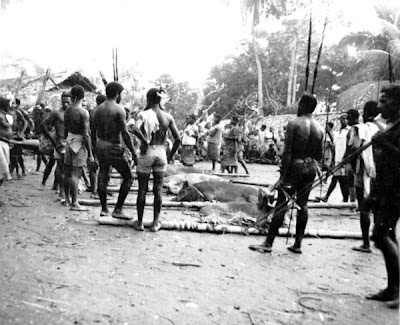 At all important festivals, pigs, which are raised by the women, are displayed at the ceremonial ground and then slaughtered.

This LP that concludes my postings of the Bärenreiter • Musicaphon - Music of Oceania series was first posted at the wonderful blog of continuo and it is thanks to the kind help of continuo that we owe the completion of this series at Anthems of Luobaniya. The post at his blog was more than accurate for most appreciators of indigenous music and listeners taking an interest in ceremonial and ritual music. His description of the field recordings in general and the rip there is impeccable. Here is how he described the record:

"Nothing can prepare you to New Guinea’s ethnic music. The fact it is not much circulated doesn’t help either. Before I go any further, I shall notice these recordings are either initiation, ceremonial or sacred events, and shouldn’t be considered merely as music, or worse, entertainment. Nevertheless, I will discuss their sonic properties only. The Abelam are a tribe from North of the Sepik River and south of the Prince Alexander Mountains, in North-Eastern Papua New Guinea. The recordings were made by Brigitta Hauser-Schaublin in 1978-83, with a few tracks recorded by Professor Dr. Gerd Koch in 1966, both German ethnomusicologists working on Swiss funding. Here’s how the liner notes describe the record: ‘Side A [tr.#1-10] consists of drum signals, songs and instrumental music connected with the erection and inauguration of a ceremonial house. Side B has excerpts from songs (some with instrumental accompaniment) performed at yam festivals and rites of passage’ [liner notes, introduction to The Recordings chapter]. The Abelam’s music combine microtonal, minimal percussion on hourglass and slit drums, and choir chant, often in antiphony style, that is, alternating male and female voices. Typically, the drums will perform long accelerandos, leading the singers in parallel glissandos." 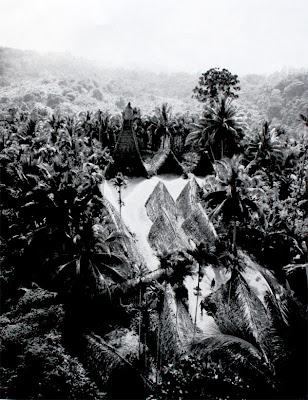 The ceremonial house is not only the imposing centre of the settlement, it can also be seen from far away.

I certainly have nothing important that I want to add to this description and It is just my steadily growing obsession, to have the original documentation at hand and especially when the notes are so ample and when the photographic material is so rich I just have a hard time resisting. The only thing "missing" from continuos post was the 20 page documentation which is now included here and also the only merit of this post. The rip is also new but not necessarily any better. You can judge for yourself as both are now available, so you can pick your own preferred one.
continuos original post is here.

Busy with so many other interesting posts continuo was still kind to enough to help out and took the extra time to send me the physical record to make it possible for me to photograph the documentation content of the Abelan LP. Thank you again continuo for your kind help!

My pleasure. Great post. Only the smell of the paper is missing.

Nice of you to drop by continuo!
Thanks again for the help!

And yes the Bärenreiters does not smell like the EMI Italiana nor the CBS France like the Supraphon nor the Hungaroton like the Melodiya. The smell we have to do without in the digital shape but we can zoom and repeat and random and amplify and mix and filter and boost and change the speed and ... ;-)

I missed this the first time around on continuo's blog....so thanks to both of you. Overall, the Music of Oceania is a very impressive series of documents, with some lovely musical moments.

Thank you very much, continuo, for passing the record on to bo, and bo, thanks as always for your excellent and meticulous post. Special thanks are due to you for the scans of the extensive documentation...deeply appreciated as always!