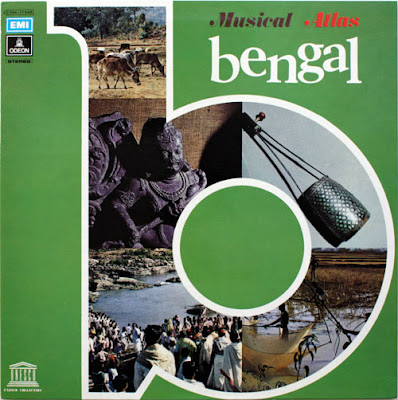 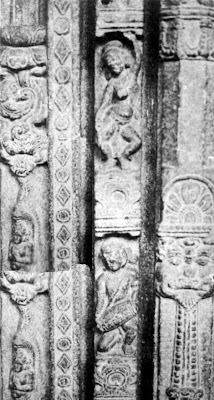 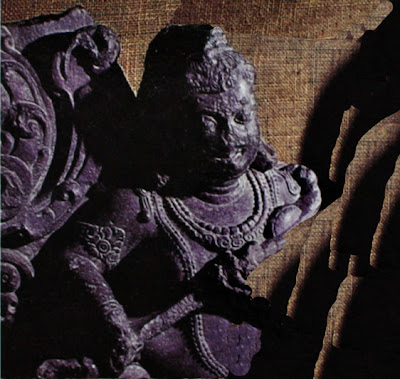 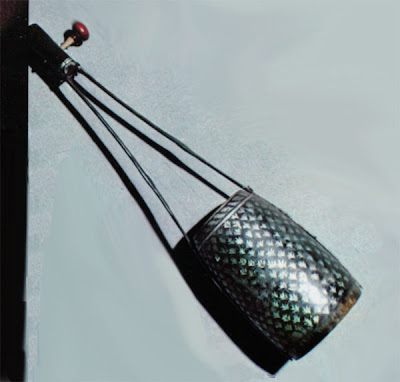 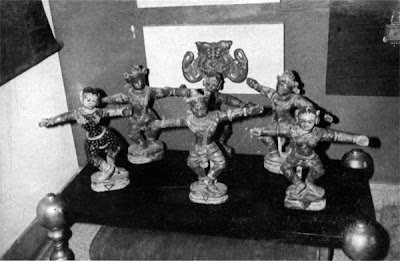 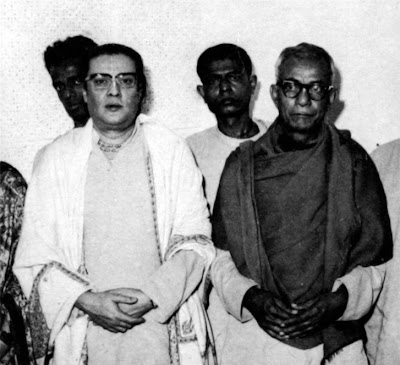 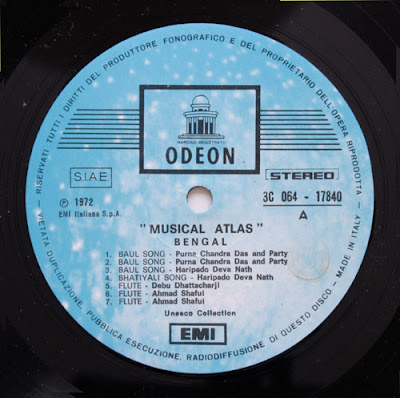 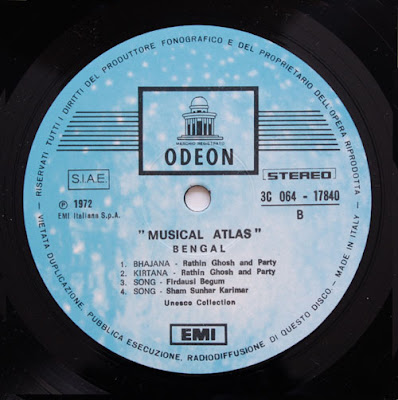 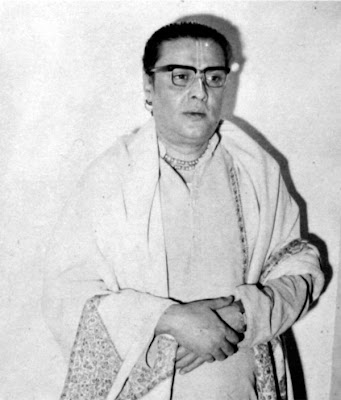 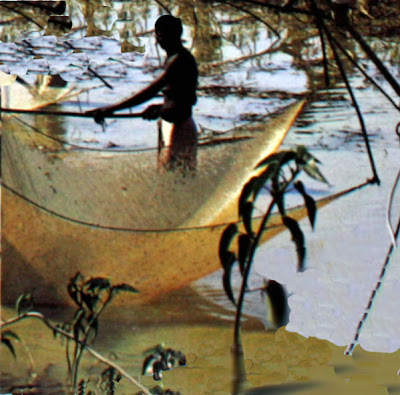 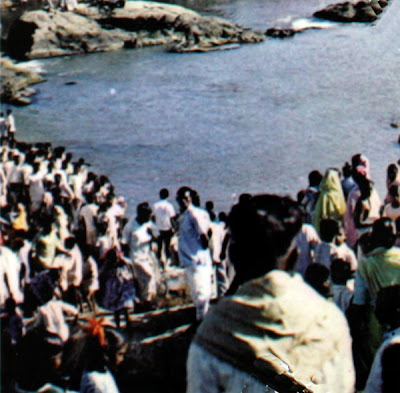 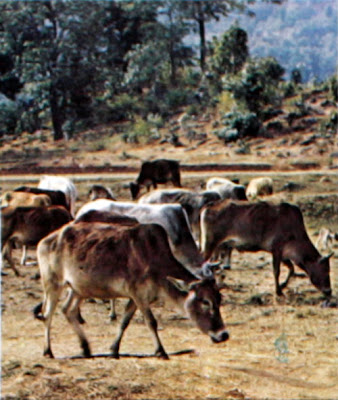 Here is another album with music from Bengal this time recorded not by Deben Bhattacharya but by Manfred Junius, Samir Naguib and with the hand of Alain Daniélou in the notes and selection. Deben was working for Alain Daniélou around the 1950's before going to London. I wonder what kind of work that was and how much music it was an influence to either party. I have not run out of Deben's recordings , nor have I ran out of recordings of Bauls and Bengali music, I just thought it would be good with some change like "same same" but different... There are so many good records and so much good music I often do not know where to continue. Anyhow rest assured that there will be many more field recordings not only by Deben Bhattacharya but by many others. Anyhow I always considered the music of much bigger importance than who recorded it. Not that I am not full of gratitude to the people who did make it possible for us to hear this but the river that flows on and on is always bigger than a drink of water no matter how refreshing. Some of this music actually does not quench my thirst but makes me more thirsty and wanting to drink more and more... 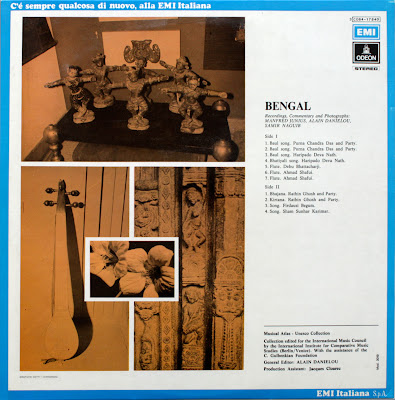 This is not a blog you have here, its a modern form of Aladdin's cave!!

I'm going to have to take a holiday and head out to some island just to listen to all this music, wtihout having to get back to 'real life' every once in a couple hours.

Dhonyobaad, bolingoji..good work! I grew up listening to some of this music in Bengal in the 50s and 60s. Luckliy, I could attend a concert of Purna Das once in New York many years later, but otherwise, I have lost touch with this music of my childhood days. Some memories will flow now!!

Thanks for another wonderful post, bo! It was also interesting to find out about Debu Bhattacharji, didn't know about him. I thought the shehnai had survived only in India, and that too thanks in large part to Bismillah Khan. Nice to know that it was used by Debu Bhattacharji in his compositions.

I just found an interesting article on the Bauls here
Included there is some information on an annual Baul festival in January that goes on for three days and nights, in Kenduli, a small village in Birbhum, Bengal. That might be a good time to visit the area.
:)

Very happy to wake up seeing there was a positive reception of my last post!

Suresh!
Very happy to bring back good sentiments of your childhood. I don't live in the past but it feels good to get that extension in time and space.

Bamsalakadi, make sure there are good connection speeds on the island. Sounds just like my own aspirations. I want to live far away from any cities, very high up on a mountain, close to a lake overlooking the ocean, in a warm climate with perfect humidity for my sensitive skin and with lots of crickets and frogs but no mosquitoes and above all there has to be a very good connection speed attached to that locality ;-)

Arvindji,
It seems our beloved Bismillah Khan also had something to do with the shenai surviving in Bengal. Debu who was a football pro and actually started seriously to learn the shenai after a street musician who used to play shenai in his neighborhood had scorned him not to take the shenai too lightly as it was a real instrument and way more complicated to play than football, and something really serious and nothing simple to fool around with like football. Football on the other hand, well that was a childrens game! Debu is said also to have been inspired by Bismilla to take the instrument to deeper levels. Does not sound too hard to believe ;-)
I have a friend who built a house in Bengal some years ago, and with a standing invitation, his wife plays the sitar but they know many of the Bauls around and he has made some recordings with them. Maybe it is time for a visit soon. But January... Everything is happening in January have to be after the Swathi Thirunal festival in Thiruvanantapuram to make it possible. Hm, then there are all the festivities connected with Sathguru Sri Gnanananda Giri Swamigal Haridhos and Shri Namananda in Thennangur, since they are all now passed on Namaji in 2009 I do not know if they have chosen a new leader but then there are so many other ashrams that have activities around pongal, 13-15 jan so hopefully it is after that... do you know what three days they are? The dates...

There may be a quick detour north but it is just to cover our "tracks".(Sorry, pun intended!) and I think that you will all be happy to know that we are soon about to travel south! At least musically, stay tuned to coming posts for directions...

Ah, what luck, this festival is also held around Pongal time :)I think the Swathi Thirunal festival concludes just a few days before Pongal, but I didn't know about the festivites in Thennangur, that will surely be worth being a part of! Phew! Pongal time is always packed with so many things, if only some of these were evenly distributed through the other parts of the year :)

Can you help to found this recording in original record or digital? I have only very low quality copy from tape cassete, and it is my favorite music.