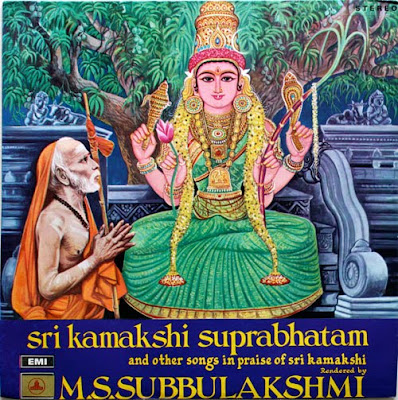 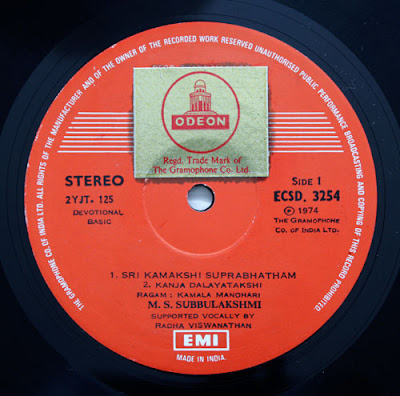 (N.B. As there is no interruption between the songs the LP-sides has been kept uncut as they are on the record the times are given but above for the individul song but there is no trackdivision!) 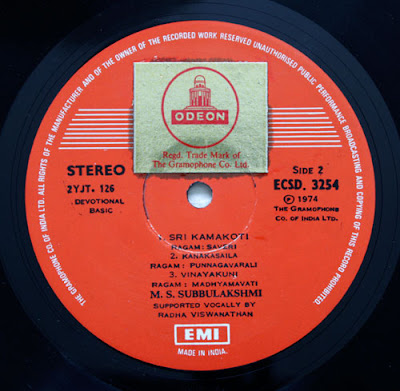 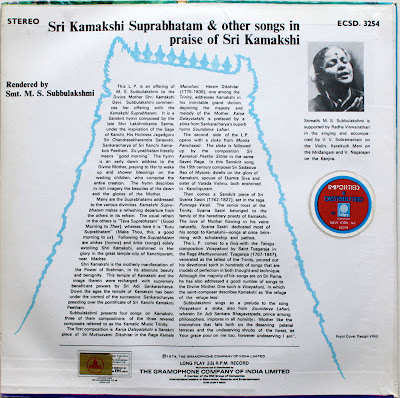 Great to have this now, dear bo! We just visited the Kamakshi Amman temple at Kanchipuram a few days back and it was a wonderful experience.

These songs bring back so many good memories. One of the most familiar songs of my childhood days was Kanja Dalayatakshi, which my mother used to sing as she cooked. I knew the song even before I knew the singer :)

Very happy to see that you are getting around a little and as far as this singing and by your mother I am sure it made the food taste very good!

Give my best tot he other pilgrims ;-)


Lyrics for Kanja Dalayatakshi by sri Muthuswamy Dikshitir posted here if anyone wonders what she is singing.


Meaning:
One who restored cupid by a mere glance! One whose eyes are like lotus petals! Dear friend of Lakshmi! Most beautiful in the three worlds! Possessing a majestic gait akin to an elephant! Possessing feet which are bejeweled with bells! Protect me O parrot that resides in the cage called Shiva! Lotus faced mother of Subrahmanya!
Unblemished one! Destroyer of affliction! Possessing a face akin to an autumnal full moon! Possessing lovely teeth! Protector of Cupid!
Residing in a pavilion of gems! Enshrined in Kanchi

(Alternative
sAhitya of shri kAncana vasanE- wearing golden raiment)! Possessing a good voice! Possessing a gentle, lovely smile! Embodied as one syllable and in many syllables! Queen of the universe! Effulgent
stream of that nectar that is the one and only bliss! Giver of liberation to those who meditate with no other thought! Creator of wealth! Queen of Lord Ekamreshvara's household! Creator of all that
is auspicious!

Notes:This kriti is on Goddess Kamakshi at Kanchipuram. The raga name Manohari is in the pallavi. The raga is now called Kamala Manohari
thanks to this kriti. In this kriti, Goddess Kamakshi is referred to as Lakshmi's friend. In keeping with this, the Goddess is praised as wearing raiment of gold, residing in a pavilion of gems, giver of wealth, protector of cupid and is compared to the lotus in many places. Compare this with the kriti Sarasvati manOhari in the raga of that name on the same Goddess by Muttuswami Dikshitar, where many
terms appropriate to Sarasvati are used. The lines describing the Goddess as the parrot in the cage called Shiva, signify that she is the supreme being on whom even Shiva meditates.

There is still a few devotional coming probablly bu soon I will go on to the concerts and some Male singers as well. So sad I cannot find any MDR LP album the moment...

hello sir thankyou for uploading this album and i request if you have Bombay sisters,Bangalore sisters albums please upload sir.