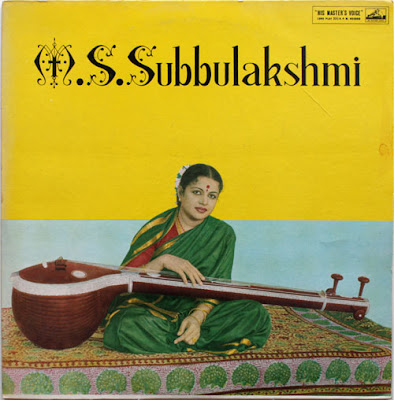 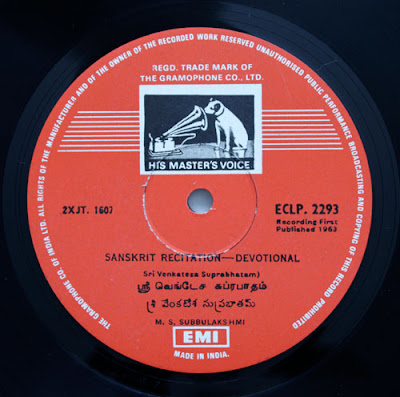 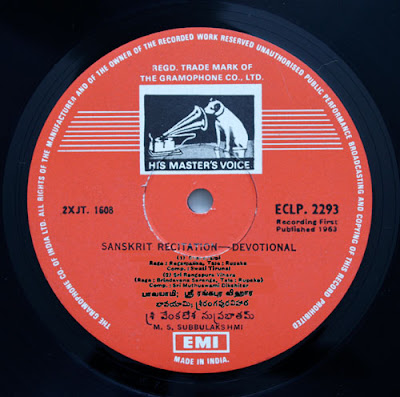 At last I have come to one of my absolute favourite singers, M.S. Subbulakshmi! I will write some more about her when I start posting her concerts. But you will find loads of information about her on the web. Here is one about the recording of Sri Venkatesa Suprabhatam among many other things. Published in The Hindu where you can read some more about her relation to HMV and recording technicians.

The little girl in pavadai chattai, oiled curls pressed into a tight braid, was too timid for noisy games with other children. But she devised a secret game for herself. Rolling waste paper into a cone, she sang into it for hours – pretending to record a ‘plate' for ‘His Master's Voice', then the biggest gramophone company in India.

Little did the child know that one day she would render the company's bestseller in ‘Venkatesa Suprabhatam,' still enjoying the longest shelf life among Indian audio recording. from Recording a Legend by Gowri Ramanyan - read on

What about a little biography? Need someplace to start? Well, for instance wikipedia... 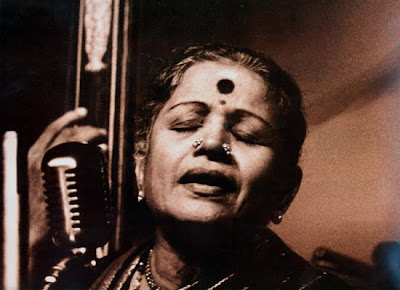 Madurai Shanmukhavadivu Subbulakshmi (Tamil: மதுரை சண்முகவடிவு சுப்புலட்சுமி, Mathurai Caṇmukavaṭivu Cuppulaṭcumi ? 16 September 1916 – 11 December 2004), also known as M.S., was a renowned Carnatic vocalist. She was the first musician ever to be awarded the Bharat Ratna, India's highest civilian honor. She is the first Indian musician to receive the Ramon Magsaysay award, Asia's highest civilian award, in 1974 with the citation reading "Exacting purists acknowledge Srimati M. S. Subbulakshmi as the leading exponent of classical and semi-classical songs in the Karnataka tradition of South India." and continue here...

I first heard her more than forty years ago and the first records was bhajans and the Concert she held in USA at UN. Over the years I have continued to listen to her very regularly and her voice is like a certain antidote to all evil and misfortune. I will post more of her Classical Concerts later but lets first start with something very typical for a morning in the homes in Madras. I am sure that as I am posting this it has already played in many many homes all over Tamil Nadu this morning, and if you start listening late you may as well begin with the B-side!

Suprabhatam, literally an auspicious dawn, is a name given to Sanskrit hymns recited in the morning to awaken the Lord.

The most famous is the Venkatesa Suprabhatam recited at Tirupati to awaken Lord Balaji. The rendition by M.S. Subbulakshmi can be heard in many Tamil houses each morning.

The Venkateswara SuprabhAtam (Morning Prayer/Song of Awakening) is attributed to have been composed at the Tirupati temple by one of Sri Ramanujacharya's disciples. 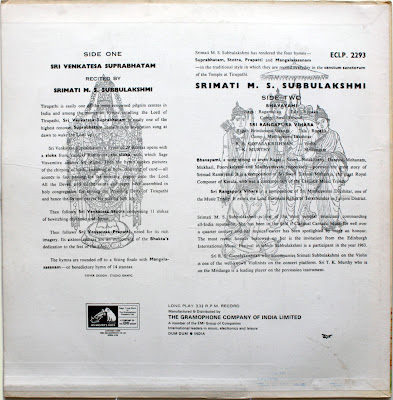 Thank you for another essential record! Anything by M.S.S. is highly appreciated.

Your wishes shall be fulfilled in the following days...
Several already lined up...;-)

Fantastic! I just saw the other one as well, but I must first thank you for this one :)

Like you say, there is no home in Tamil Nadu and very few in the whole of South India that do not have these suprabhatams. Its a usual start to the day...MS amma's voice, filter coffee, the sound of water being splashed at the entrance of the house before the kolam is drawn.

I cannot think of any better way to start a day than with MS' voice.

Rangapura Vihara is just excellent. Everything I like about MSS is contained in that one song!

Hi, I came across this site just now and instantly became a fan. Tis is a paradise for me.