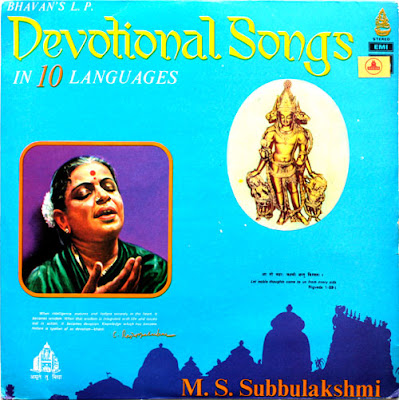 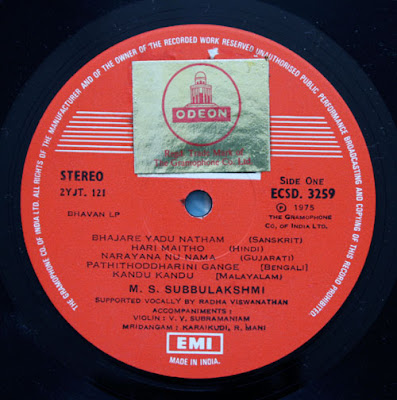 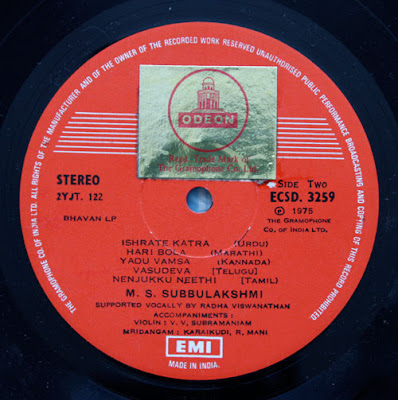 I cannot resists continuing to post M.S. Subbulaksmi's Devotional repertoire and this one is one of the first records I bought by M.S. Subbulakshmi. And like the good Arvind said before when discussing some of the songs presented here:

"It's very rare to come across a bhajan in Urdu, the language which evolved in the courts of the erstwhile princely state of Awadh, what is now Lucknow, in Uttar Pradesh. It's the language in which Ghazals are written, and often Qawwalis too, but listening to an Urdu bhajan is a real treat!

On this record there is also a very young Karaikudi R. Mani playing the mridangam, but after this and maybe, maybe just one more and then there will be Carnatic classical concerts and soon I will go back to mixing music from all over, there will be some more South East Asia, Oceania and some more following Deben Bhattachariya around. OK... 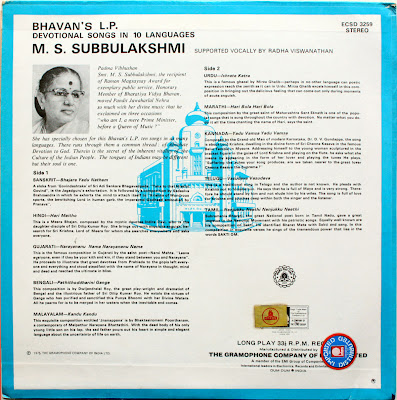 this was the record that initiated me to M.S. Subbulakshmi,needless to say that it was the sparkle of my love for her music,nice to have it now better sounding than my old cassette.
thank you bolingo
for all you do...

If only paati had stayed on with us a little longer. I was compiling a selection of songs by MS from the records you posted recently, for her to listen to. She would have loved it. Though there were other musicians she held in high esteem, like Chowdiah, Desikar etc., MS always had her highest respect and admiration.

This is an excellent record! Thanks for sharing it and for all the other musical treasures you've spread around so generously.

Chanceless rendition..!! Great fan of MS Patti..Please post more of her Lps..Also other Great Carnatic Musicians....Thanks for this great service...!

I made a cover and a backcover for a cd box, here:

and ty for the music.