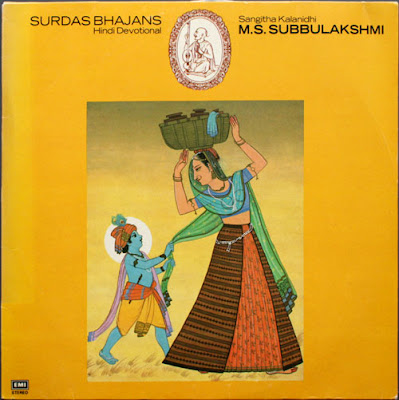 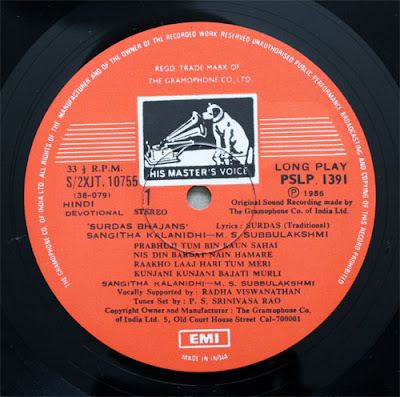 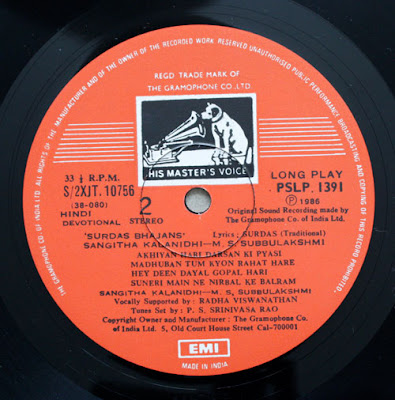 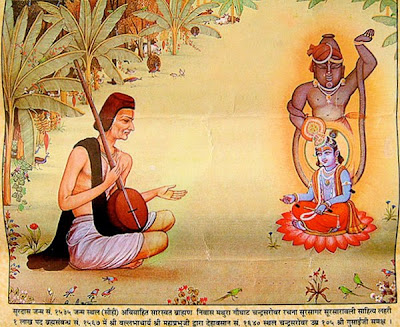 Sūrdās, (fl. 16th century, probably in Braj, India; traditionally b. 1483—d. 1563), North Indian devotional poet known for lyrics addressed especially to Krishna that are usually considered to be the finest expressions of Brajbhasa, one of Hindi’s two principal literary dialects. Owing to a biographical tradition preserved in the Vallabha sampradāya, Sūrdās (or Sūr, for short) is usually regarded as having taken his inspiration from the teachings of Vallabha, whom he is supposed to have met in 1510. Sūr is said to have become foremost among the poets the Sampradāya designates as its Aṣṭachāp (“eight seals”), following the convention that each poet affixes his oral signature (chāp, or “seal”) at the conclusion of each composition.

Yet a number of factors render this connection historically doubtful: the awkward logic of the story of the meeting of the poet and philosopher, and the absence from early Sūrdās poems of any mention of Vallabha and of any clear debt to major themes in his theology. More likely, Sūrdās was an independent poet, as is suggested by his continuing appeal to members of all sectarian communities and well beyond. He probably became blind in the course of later life (the Vallabhite story makes him blind from birth), and to this day blind singers in North India refer to themselves as Sūrdās.

Poems attributed to Sūrdās have been composed and collected gradually, swelling a corpus of about 400 poems that must have been in circulation in the 16th century to editions of some 5,000 in the 20th century. A 19th-century manuscript boasts twice that number. The size of this cumulative tradition, in which later poets evidently composed in Sūr’s name, justifies a title that had already been assigned to the corpus by 1640: Sūrsāgar (“Sūr’s Ocean”). The Sūrsāgar’s modern reputation focuses on descriptions of Krishna as a lovable child, usually drawn from the perspective of one of the cowherding women (gopīs) of Braj. In its 16th-century form, however, the Sūrsāgar gravitates much more to descriptions of Krishna and Rādhā as beautiful, youthful lovers; the pining (viraha) of Rādhā and the gopīs for Krishna when he is absent—and sometimes vice versa; and a set of poems in which the gopīs lambast Krishna’s messenger Ūdho (Sanskrit: Uddhava) for trying to satisfy them with his spiritual presence once he has finally left their midst. They will have nothing less than the real, physical thing. In addition, poems of Sūr’s own personal bhakti are prominent, whether as celebration or longing, and episodes from the Rāmāyaṇa and Mahābhārata also appear. Encyclopedia Britannica

The concept of devotion towards Godhead, though very ancient, had its birth in the South, says an old adage. But its expansion, depth and value acquired a significant place in literature in the beginning of the 16th Century through the compositions of a galaxy of scholars in the North. Among them, even today, Bhakta Surdas occupies the first place. Bhakta Surdas is rated as an outstanding composer of devotional songs in Hindi. For his compositions he chose many areas; among them the area of an unfathomable affection of a mother towards the child is most popular. He also added a new dimension to his compositions by introducing the yearnings of a devotee towards God and also the inexhaustible quantum of wordly wisdom. These songs are said to be available in scores of thousands and they are being treasured from generation to generation. There is a general belief that Bhakta Surdas was deprived of his physical vision. Yet he envisioned through his compositions, the entire scenario of Lord incarnate, Sri Krishna's life, particularly his childhood. These compositions are equally valued by scholars, poets, musicians and dancers covering the whole gamut of aesthetics. The name of Bhakta Surdas is treasured by every singer with reverence in this country. His poems have been acclaimed both as classical and popular and treated as the touchstone for excellence of singing for their style, music and richness of thought. 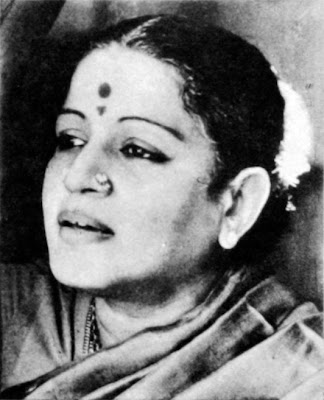 Srimathi M.S. Subbulakshmi, by her reputation, crossed all barriers of language. She developed a language of her own through her songs making her singing intelligible to everybody among her audience composed of all sections, irrespective of speech. age and special strata. She has chosen to present a few Bhajans of Bhakta Surdas through gramophone records; the pieces chosen and the ragas selected are just superb. Like her wealth of music, Srimathi Subbulakshmi's munificence also is matchless It is very appropriate that she has renounced the royalties on this valuable record of Bhajans of the blind saint, Bhakta Surdas in favour of Sankara Nethralaya, a unique hospital in Madras dedicated to serve people suffering from eye ailments. By her reputation, which she has been maintaining for over four decades, she made an invaluable addition by these songs to enable her listeners to get into ecstasy and attuned to divinity and devotion. (From the sleeve notes by Dr. Moturi Satyanarayana) 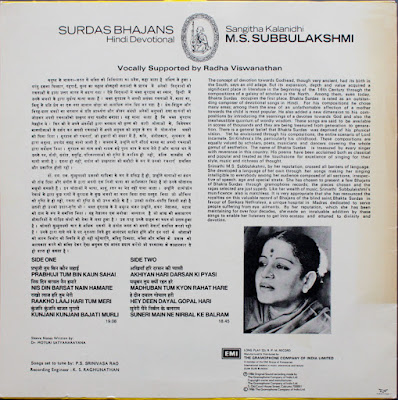 Beautiful! Thanks a lot, dear bo! Things have been hectic here, but after a long day on the road, its always a pleasure to check in here and find another surprise waiting. :)

Nice to hear from you and good of you to drop a few lines now and then, even if I can understand you have a lot of other things around you at the moment. Really curious to find out what adventures you have had so far but I can wait till you all can catch your breath!
Best to you and C & O and all!

Dear Jee,
I am an ardent lover or your posts and I never delay to download and enjoy them. Thank you very much for the treasure from the past!
By the way, can you post some of D K Pattammal's old LPs or EPs?

I will post some of the other pretty flowers in the Madras Quartet Bouquet . There will be MLV & Pattamal but I don't think there are any LP's of Brinda Mukhta so maybe a K7... But first some instrumental and some male singers...

I expect some Madurai Mani Iyer, too!!

How could you possibly have guessed ;-)