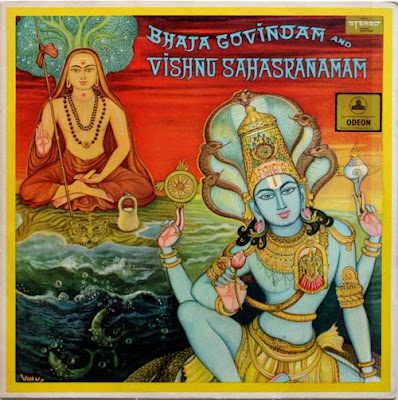 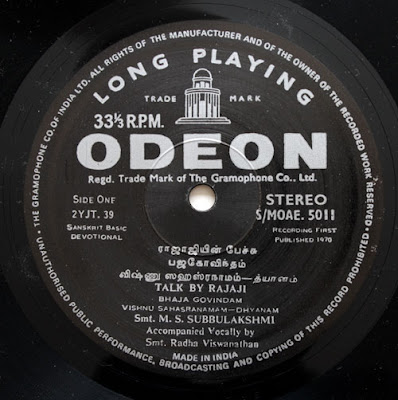 A1 Talk on Bhaja Govindan by Sri Rajagopalachari 'Rajaji' 2'05
A2 Bhaja Govindam - 11'04 - (lyrics in sanskrit, with interpretation into hindi and english)
A3 Vishnu Sahasranamam - Dhyanam - 6'54 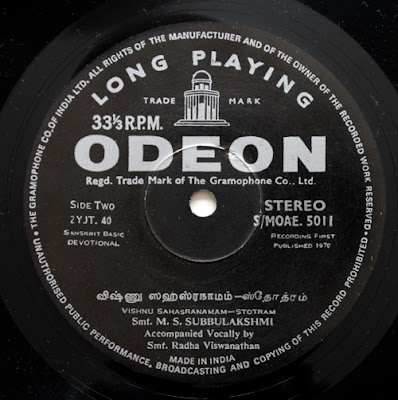 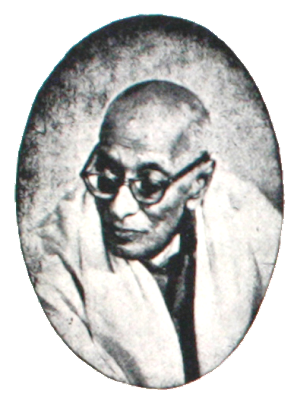 Chakravarthi Rajagopalachari (Tamil: சக்ரவர்த்தி ராஜகோபாலாச்சாரி) (December 10, 1878 - December 25, 1972), known as or Rajaji or C.R., was an Indian lawyer, writer, statesman and a devout Hindu . He was the second Governor-General of independent India. Later he became the Chief Minister of Madras State, and was one of the first recipients of India's highest civilian award Bharat Ratna (in 1954).

CR made several literary contributions. His works in his native Tamil are recognized as modern classics (published and re-printed several times). After his break with politics, he started on the massive task of translating the Hindu Scriptures Ramayana , Mahabharata from Sanskrit to Tamil; and later into English.

He received rave reviews from scholars and religious seers alike. He translated Upanishads and Bhaja Govindam into English. His book Hinduism - Doctrine and Way of Life is a concise essence of the doctrine and way of life propagated by Hinduism.

His novels and short stories, themselves would have won him public adulation. He also translated 'The Tirukkural' from Tamil to English. 'Tirukkural' is an ancient piece of the Tamil literature and is often referred to as 'the flower of Tamilnad'. His ability as a writer, is in a sense, unparalleled, not just in India alone.

I will post the UN concert in the following days... 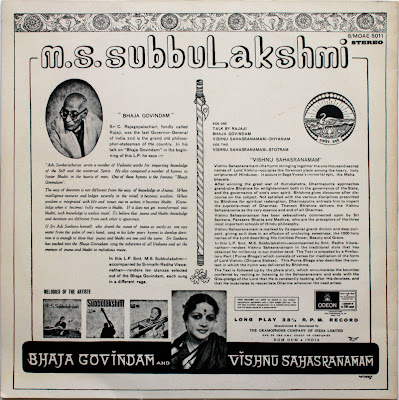 i really like the sanskrit recitation. was going to express that feeling regarding your previous post (hoping for more) but decided not to... well, looks like a lucky day for me...

Thank you very much, bo! Very grateful for these timeless renditions by MSS!

Happy we are having some happy days and Nice of you to stop by =D and Arvind!

MS Subbulakshmi's chants are such a balm after a difficult day! Thanks for passing these on.

At the end of both side A and side B in a cassette we had, a melodious music is played which I am not able to find online. I dont even know the name of that melody. Could you help me to locate it? I have been searching for it for years now, but with no use. I dont have the cassette now. If possible, help me to find it, would you?

Pl. upload this VINYL in FLAC 24 or 32 Bit as the link is not working.