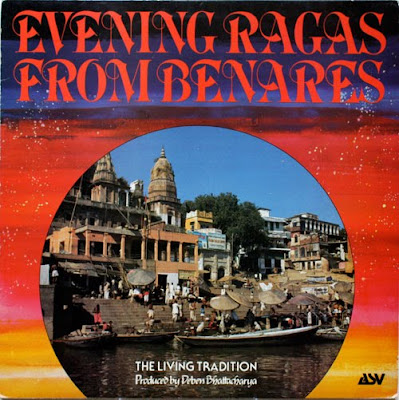 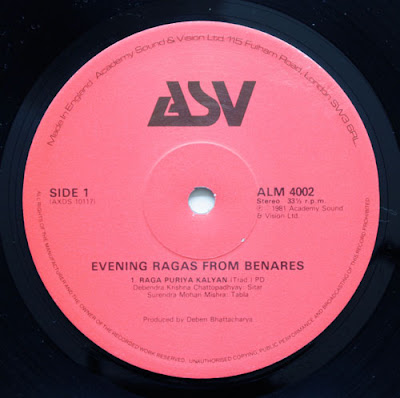 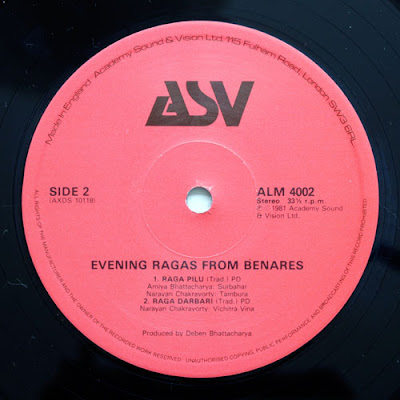 Here is an album produced by Deben Bhattachariya in the eighties of classical music for the stringed instruments Sitar, Surbahar and Vichitra Vina. The recordings are made much earlier some in private gatherings "mehfils" and in the homes of the musicians and like Deben Bhattachariya says in the liner notes you here and there hear: "the sounds of passing travellers and the cries of the vegetable salesman in the street outside combining to bring the atmosphere of India to the listener. As none of the musicians on this record are well known because they never recorded commercially, I highly recommend reading the liner notes (this time in english) as they not only reveal some valuable information on the performers, like that Debendra Krishna Chattopadhyay had his first musical training from his father, a highly respected Dhrupad singer professionally known as Panubabu for instance, but also gives a little glimpse into the philosophy of Deben's way of recording and what he wanted to preserve and transmit beside the well trodden path of commercialism. Hope you enjoy "being there". 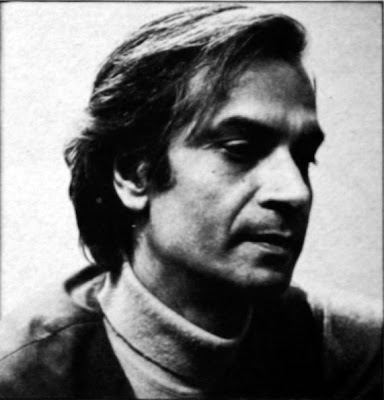 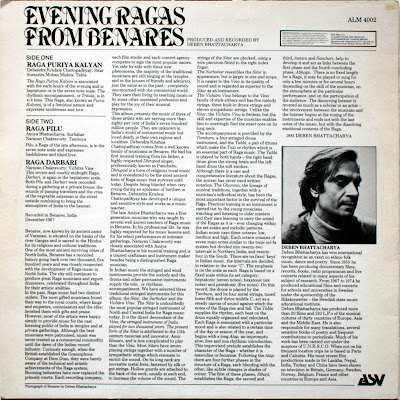 Deben in his home turf :)

So many great records in such quick succession....staggering!

Nice of you to drop by owly, and "anonymous"

Fortunately I have still not ran out of possibly staggering reanimations ;-)

Glad you like it and still a few to go. but maybe we are getting Deben overload soon. I am still enjoying his indian recordings there are at least three more of those Many of his balkan adventures are ready to go but it will be a sharp break from the Indian so maybe there will be something not Deben but india or something totally different coming up soon... ;-)

Arvind, glad you also liked it, and on this one there are some lines I like to read on the record sleeve keeping in mind some of the reviews that some of his records got. About information not always correct on the sleeve and labels. These examples are legio and I guess Deben cannot be excepted from that. But people doing the graphic design have a big responsibility for many of those goof ups!

Oh, oh, oh, how sad these players never knew their pluckings would one day be lauded as a ”great record” and a ”precious gem” by the same crowd that has just listened to half a dozen of Bhimsen Joshi’s best LPs!!!

Ah yes, graphic designers can be expected to goof up like this, most of them want nothing more to do with long text than to make sure it looks good. I spent enough time in advertising to know what you're talking about :)

But it baffles me that there was no proof editing! Surely, there must have been an editor on board to check the text after the designers had finished their layout.

Anyway, I think I've retained some sort of obsession for accuracy from my advertising days, where even a full stop out of place spelled trouble for us.

Please rest assured that we never listen to any of this music! We only read the liner notes on the backsides of the sleeves and collect the pretty front covers much as you would do with any collection of stamps!

On another note and I hope it does not cling too out of tune I am not looking always for excellence in performance but find it both pleasant and amusing to hear a setting of sentiments and atmosphere that is not a concert situation and that captures something different than only the peak instrumentalist or top performing artist would bring about. The elitist approach will get nowhere trying to understand what is precious or great about these records, but I'll give you this! You sure picked the easiest one of the whole lot to criticize ...
If you look at the accompanying notes it must e clear to you that these artists never competed with the Bhimsens nor tried even to gain fame. They belong to the musicians and traditions that through Gurukula made it possible for shishyas to gain deeper insights in a tradition and repertoire and often some of these were instrumental in training the very best performers as you probably well know.
This kind of sardonic remarks is not exactly in conformance with the high standard I have come to expect from the elevated ivory tower of your brilliant self. Not really what one guessed would emanate from such a seasoned critic ;-)

Try this one instead and if you don't like what you hear there I guess you are a hopeless case and it saddens my heart ;-)

Ha ha ha, fortunately, you already know I spend more time treasuring and championing unknown and distinctly unpopular singers than I do listening to Bhimsen Joshi. (If anything, I feel guilty that Bhimsen doesn’t move me enough!)

Maybe I ”picked the easiest one to criticize” because I liked the other ones, you know ...

Panchamkauns, I always respected your scrutinizing and elegant tastes if anything, and I was even about to warn you since I know how much you like vichitra vina and surbahar and that very few find any mercy when you listen attentively, which I must say is the only way you know how to listen. I can get very sloppy at times but I have sincere hopes that you will find something that can cause you to leave a positive comment on some of the following posts and plus or minus I still would like very much to hear what you think about the music in the next post! Whichwhatever I am very happy that you honour my efforts with your presence and even find time to write a few lines now and then!