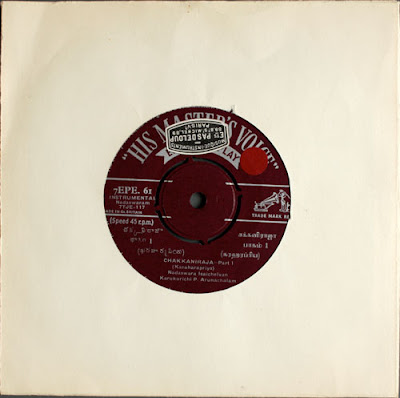 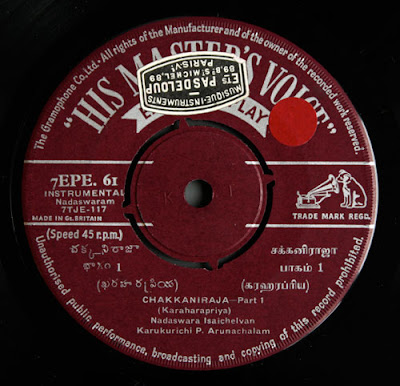 When there are nice royal paths,
why enter bylanes? O Mind! 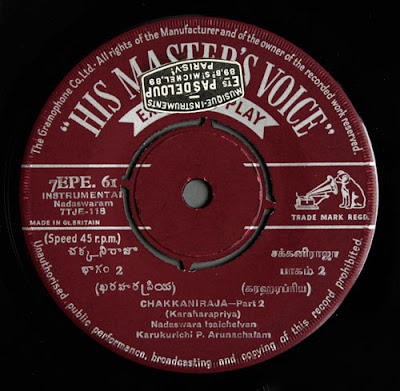 I hope everything went well and that my friends have safely landed in Madras. Here is a Nagaswaram piece that should be fitting as a fanfare of welcome and as the Nagaswaram is an auspicious instrument often announcing that the festivities have started, I will let this be the first in a long row of good recordings of Nagaswaram music.

Lets start with one of the two real pillars of Nagaswaram music. The first and by most rasikas agreed to be the greatest of all the recorded players to date would be the larger than life T.J. Rajaratnam Pillai (1902-1956). I will post some of his music later because I tend to even more like the slightly mellow and sometimes pensive romantic tone of his around twenty years younger disciple Karukurichi P. Arunachalam, also he considered part of the very foundation of the tradition! 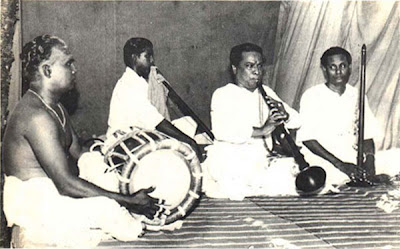 I was very lucky on one of my visits to His Excellency to bring back home a real rarity from the fifties, as the good friend he is, he kindly lent me this EP pressed in Great Britain in 1958. I hope you will like it and that it can serve as music for many happy landings!

Setup of a typical orchestra, two Nagaswaram players in the middle
and two Thavil players, one on each side. 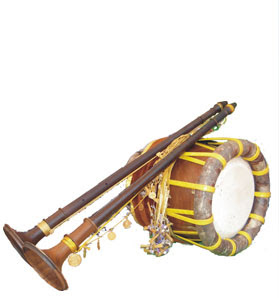 The nadaswaram (also spelt nadhaswaram, and also called nagaswaram) (Tamil:நாதஸ்வரம் ) is one of the most popular classical instruments of Tamil Nadu and the world's loudest non-brass acoustic instrument. It is a wind instrument similar to the North Indian shehnai but larger, with a hardwood body and a large flaring bell made of wood or metal. 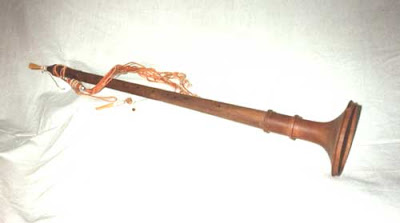 The nadaswaram contains three parts namely, kuzhal, thimiru, and anasu. Traditionally the body of the nadaswaram is made out of a tree called aacha.

It is a double reed instrument with a conical bore which gradually enlarges toward the lower end. It is usually made of a type of ebony. The top portion has a metal staple (called "Mel Anaichu") into which is inserted a small metallic cylinder (called "Kendai") which carries the mouthpiece made of reed. 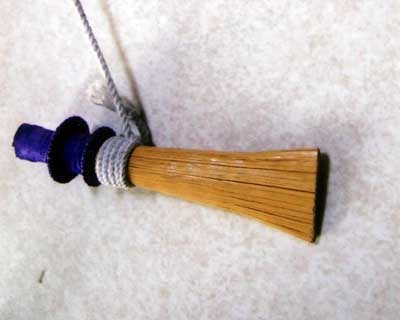 Besides spare reeds, a small ivory or horn needle is attached to the Nadaswaram. This needle is used to clear the mouthpiece of saliva particles and allows the free passage of air. A metallic bell (called "Keezh anaichu") decorates the bottom.

The Nadaswaram has seven finger-holes. There are five additional holes drilled at the bottom which are used as controllers. The Nadaswaram has a range of two and a half octaves like the flute. The system of fingering is similar to that of the flute. But unlike the flute, where semi and quarter tones are produced by the partial opening and closing of the finger holes, in the Nadaswaram they are produced by adjusting the pressure and strength of the air-flow into the pipe. Hence it is a very exacting instrument. Also, due to its intense volume and strength it is basically an outdoor instrument and much more suited for open spaces than for closed indoor concert situations.

In Tamil Culture the nadaswaram is considered to be very auspicious, and it is the key instrument which is played in almost all Hindu weddings and temples in Tamil Nadu. It is part of the family of instruments known as a Mangala Vadya (lit. mangala means auspicious, vadya means instrument). The instrument is usually played in pairs, and accompanied by a pair of drums called thavil. 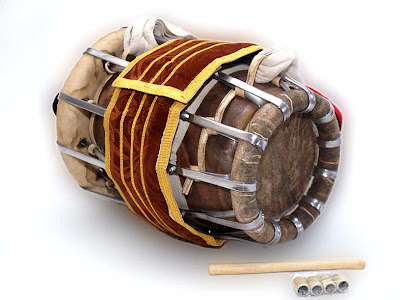 The thavil is a barrel shaped percussion instrument from South India. It is used in folk music and Carnatic music, often accompanying the nadaswaram. The thavil and the nadaswaram are essential ingredients of traditional festivals and ceremonies in South India. The thavil consists of a cylindrical shell hollowed out of a solid block of wood. Layers of animal skin are stretched across the two sides of the shell using hemp hoops attached to the shell. The right face of the instrument has a larger diameter than the left side. The instrument is hung by a leather strap from the shoulder of the player. The right head is played with the right hand, wrist and fingers. The player usually wears thumb caps on all the fingers of the right hand. The left head is played with a stick made from the wood of the portia tree.

And a big vanakkam from Madras! Yes, our friends have arrived here safely and in good spirit, and we have been busy going around the last few days. You are missed and thought about very often. Of course, we will have the fortune of meeting later in the year and spending some great time together!

Without further delay, I must thank you for bringing this to us with your care and love, and His Excellency for preserving so well this treasure of a record! Its a real honour to be able to listen to this, and it always puts a smile to my face when I remember that yes, there are still such generous people around in this world!

The records you have been sharing lately will be a fitting soundtrack to our travels through Tamil Nadu in the coming weeks :)

This is an instrument I fell in love with when I listened to the Periya Melam disc on Ocora. Such power and life.

I'm looking forward to the other Nadswaram music you will post here!

Nice to see that you are all all doing well Arvind!
You and C&O are constantly on my mind...

Don't forget to report from your travels to the less fortunate ;-)

I have to write innumerable pranam and mahathanx for You, Dear Lars, who is the Mahatma of the Nation of the Luobaniya.
If there was some information about your email address I could to explain a detailed danyavaad from/by a kindred soul from Hungisthan.
Namaskar
Laszlo Hortobagyi (www.guo.hu)