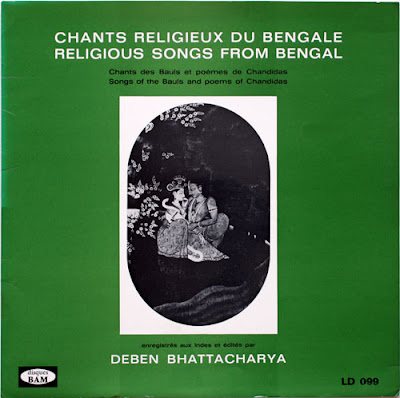 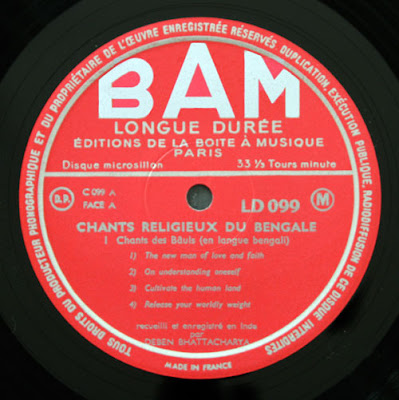 Purna Chandra A3
Bhaktadas Baul A2
Haripada Debnath A1, A4 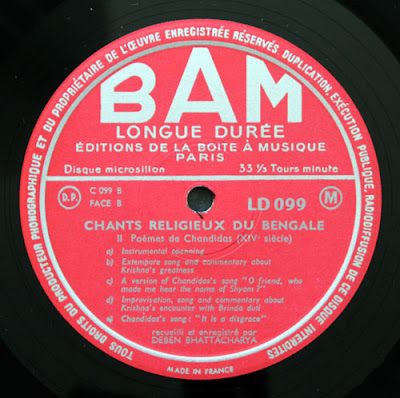 This is the first of a series of posts where I will pay homage to the work of Deben Bhattacharya to make so many musical traditions known. A well deserved tribute to a remarkable person who was responsible for preserving so much music mostly of the popular traditions from so many different countries but never neglecting the musique savante. I will start by posting some of his early Indian recordings, mainly because the first real contact with live concerts of Indian classical and folk music that I ever had was through the concerts he had helped to arrange together with Rikskonserter while he was living in Sweden from the 1960's - 1970's. It was not just art music but also folkmusic like the Rajastani music of the Langas. That was the first Indian folk music I had ever heard and to hear that live in repeated concerts several hours long with singers and musicians like Alladin, Noor Mohmad and Shumar Khan. Some of these concerts were recorded and broadcasted by the Swedish Radio. I will post some of those broadcasts a little later on. Here is a little something about those times that Deben Bhattacharya spoke about in a most interesting interview that he gave to Kevin Daly in 1982.

"Between ’61 and ’62 I went to live in Stockholm. Sweden was very fruitful for me; Stockholm Radio began to take fairly regular programmes from me. Soon after that, a new organisation called Rikskonsert started in Stockholm. It was run by a man called Nils Wallend, and its job was to impart musical education in Swedish schools, from playgroup to adult – all paid for by the state. They invited me to produce the extra-European music and also I got involved with music of the socialist countries because I had done a lot of work in those countries, and I had a fairly large collection of music from most of the socialist countries except Russia. I brought musical groups from various countries to Sweden, to appear at concerts and in schools to show them what music of other countries was like." You can read the full interview here...

Also don't forget to take a stroll over to the excellent post on the recordings made by Deben Bhattacharya in Israel in June and July in 1957 at the blog here, The World's Jukebox... 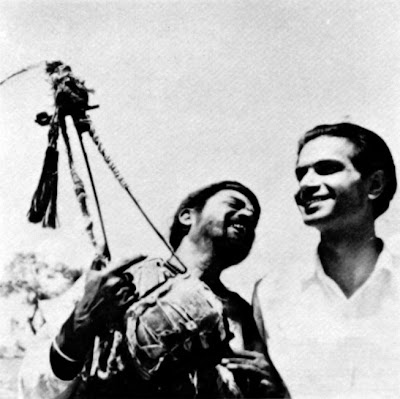 A very young Deben Bhattacharya with a gopijantra-playing Baul. 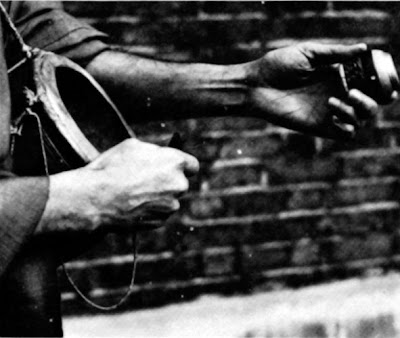 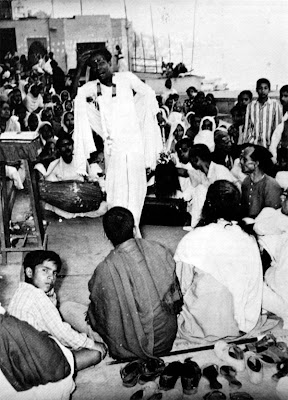 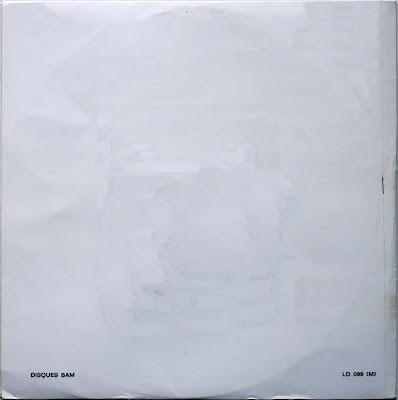 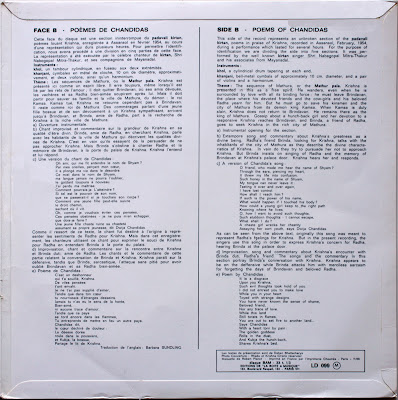 Substitute scavenged from the inside flap.

He did a very good job!

Another thing that intrigues me is to know how much there were a sharing of thoughts when he was working for Alain Danielou and how much interaction there was and if the "helping" was more mutual or more formative. I am sure there are things to learn about his determination to record Indian traditional and folk music from that early experience in Benares...

This is what he said in that interview from 1982 with Kevin Daly that got me curious:

"I met two Europeans who were living like Indians in Benares, a man called Raymond Burnier, and his partner, a man called Alain Danielou. He was a French man. I was excited by their involvement with Indian culture: one was working on Indian music, and the other on art and sculpture. I asked them if I could interview them for the paper, but they were not interested at all. I was too timid to pursue it – I was a most unsuitable journalist! We got a little friendly, we began to meet from time to time. Burnier asked me if I would like to help him with his work, and offered me a hundred rupees a month. It was practically twice the money that I was earning from both of my other jobs; this was just about precisely the moment when I was thinking of going abroad. I thought maybe something might come out it, through them to help me leave India. I worked with them for five years."

Thanks bo, for the precious music, and for your interesting post!

I just finished reading through the wonderful interview you linked to. Very inspiring life story, and it revealed many things about Deben I was unaware of, like the fact that he also made documentary films.

Though the world has been documented extensively both in video and audio since the days when he began recording, I think many of his ambitions are still relevant. There are still so many cultures that live on, largely unknown to the rest of mankind. Their lives are being constantly challenged by change, but there are still some remnants of old traditions.

I'm surprised that more of his recordings weren't released in India; must have crossed his mind sometime. Maybe he didn't think it a viable option to sell his records in India, or its more probable that the record labels didn't think so. For me, his work is a source of great pride on one hand, because here is an Indian who chose to do something that no other Indian thought important enough to do, at least at the time and in the level that he did. But on the other hand, it surprises me that his example wasn't available for future generations in India, people who might have taken to similar lives if only they'd been inspired by his life's work.

But I'm certainly not complaining! Now, thanks to the internet and to so many generous people like you, we can finally listen to these recordings!
Why, these records might even inspire someone in present-day India to pick up a recorder and travel across the country! :)

Arvind, I am very glad you feel inspired and I really hope many others will too! I myself am certainly inspired enough to travel across India with microphone and camera, and should we be lucky enough that our paths cross, so much the better. Even today like you say there are many undocumented old popular traditions and customs fighting not to be obliterated for good by the so called "progress" of the greediest manifestation of society in the name of promoting "civilization". Excessive consumption would be so much harder if more time was spent on making and listening to music ;-)

Oh happy day! A thousand thanks comrade Bolingo - you are making dreams come true sure enough. What an inspiring experience this blogging adventure is.

Thanks a lot Bolingo! "Release your worldly weight" is a lovely song.

Happy you find some comfort in these peaceful and soothing sounds

And, Yes Janas it is a truly beautiful song with the chorus of so many mildly stridulating crickets in the background!

So much better than any shrutibox...

just came through this. dying to listen to the music. But links are not working. can you please repost?