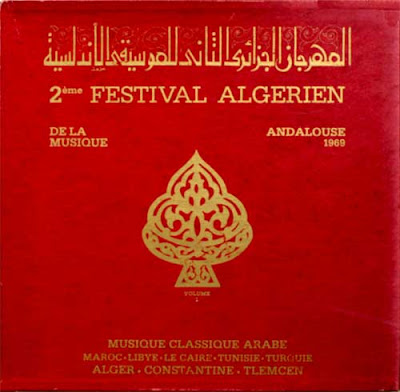 Listed above are the matrix numbers as they read in the black vinyl surrounding the labels, there are no catalogue numbers or other distinguishing number than the disque 1, etc.. printed on the label and the circled number 1-6 on the sleeves.

The LP-box pictured above contains six LP's that is half of the LP's issued from the concerts held at the festival, anyone holding volume 2 [7-12] is hereby most encouraged to step forward and share with us this assumedly equally precious collection of Arabo-Andalusian music.  I will in the following days posts all the above listed LP's as individual posts and this post contains only the discographic information.

Indeed any other discographic info concerning the documentation of this festival or any of the others (see this post for one of the records from the third festival held in 1972) are most welcome. I owe this information as well as the opportunity to digitise and document these records to my good friend "The Mine of Vinyl". He is a veritable "Saluki hound" for finding rare and obsolete vinyl. I am sure, as the saluki is considered clean, also according to Islamic faith, that there is no coincidence that it was he, who found this precious box of Arabo-Andalusian gems in a thrift shop run by the local Salvation Army here. In itself a good story of record hunting. Thank you once again my noble "Saluki Vinyl Hound"... 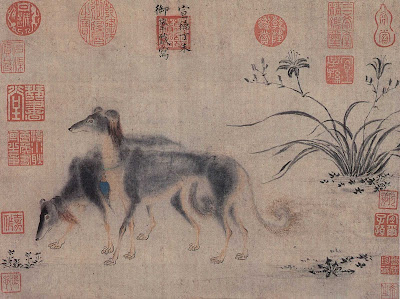 zowie, this is something i'd long hoped to hear...!

Me too. Thank you soooooooooo much
Tawfiq

Brother-
Thanks so very much for posting these wonderful collections of music..I have only discovered your site in the last few mos. and have delighted in much what you have shared and in the pleasure you take in the sharing...I had the opportunity to snatch up some of the recordings you mention at a local used music store some months back and feel that it is time for me to get on board with sharing what vinyl I have come across over the years...bear with me in my effort, but will try to share with you in the same spirit you so graciously give...I have vol. 1,3,4,6 of 1er festival 1967, and vol. 3, 4, 6, 7, 9, 10 of 3eme festival 1972...will scan covers, record labels and digitize the discs...I do this usually for myself so some ideas about what format to use would be helpful...i will upload the folders in Mediafire when they are ready...


Your message is the best news I have heard in a long time!

There are a few people that has reacted the same way as you and to be honest with you promises like yours and theirs motivate me to continue this blog in no small degree, They make me feel that the Sisyphus work I do is not in vain and actually makes the image of a Sisyphus false. The stone is not rolled back down the slope but instead you let me roll another even more beautiful than the previous one to the top again for all to see. This makes me exited happier to share and also much more committed to make this blog a more stable and constant archive. Long before I started this blog I had been thinking about ways to create a large archive open to many participants and housed by an institution. This is of course something that mostly ends in rigid inflexible systems that never even reach the point of opening but end in preparations and stifling rules. I have made my blog personal but in the hope that tidings like yours were to reach the blog and we, who care for a certain kind of music beyond the commercial interest would meet on friendly terms and share generously. Helping each other to dig out the precious gems from our own and our friends collections. Music that in most instances never would even be heard again let alone reissued can come back to life here again. So please send me a mail so we can have an easier contact and better carry out the continued joint venture ;-)

Please autumnleaf, write me to my mail address:

so I can do my best to aid you to help me and therefore all of us living in, or visiting the Luobaniyan realms...

b.t.w. autumnleaf I do not know if you noticed but one volume that you mention (and a very good one it is) from the 3ème festival namely no 7 I have posted here already. See this post...

And I have another good promise for the volume 2 of the same festival by another generous follower of this blog. And hopefully, In due time maybe we shall be able to reconstruct the complete holdings of all the festivals ;-)

Thank you autumnleaf for putting me in an exalted mood and in very high spirits, on top of the fact that the snow has finally melted and the spring is full of good clean air, nature, wild and in the parks are budding and blossoming, the magnolias mild violet and almost but not yet light green weeping willows sets the background for this andalusian mild breeze to blow whiffs of exotic spices into...

Hey, I've come across volume 2 of this set. I'm browsing the net trying to find out anything about its value. I was hoping you might be able to help me with any information you might have. My email's aliplessmouth@gmail.com if you would help me. Thanks if you do.

Thank you so much for sharing these records of the Andalusian Music Festivals.
I was wondering if anyone does have older records of this music to share?, Sfindja?, Saidi?, Mouzino?, Bouchara?, Yafil?..etc

Hi, good time from me,, just discovered this amazing site with huge musical info. is it downloadable? thank You!

Hi, good time from me,, just discovered this amazing site with huge musical info. is it downloadable? thank You!
Jorj.