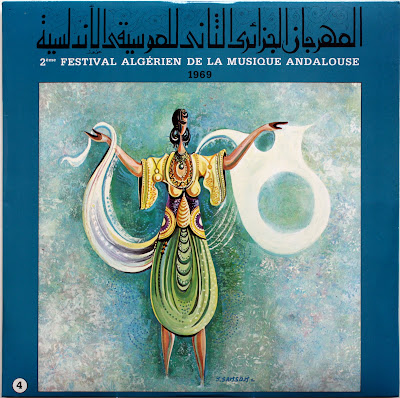 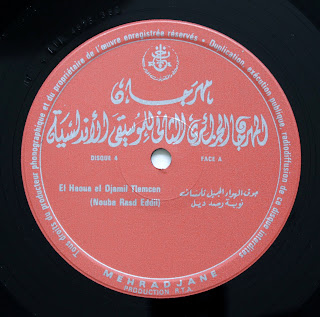 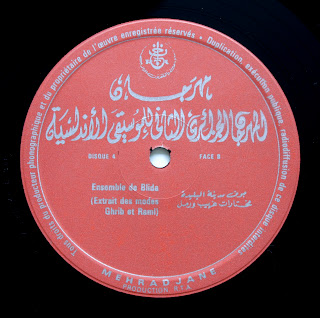 We have at last reached the fourth LP and to me this record is the best in the box and mostly really because of the B-side! The ensemble El Haoua el Djamil led by Ahmed Mellouk on the A side with the Nouba Rasd Eddil a beautiful piece of music and is evidently very good. It is a beautiful rendition that stands on its on merits but for me the flip side gets much more playtime.


This fourth disc from the box, is the one where Mohamed Benguergoura and Dahmane Ben Achour accompanied by the Ensemble de Blida under the direction of El Hadj Medjber appears in all subtle splendor! Mohammed Benguergoura is one of the old masters, father of the maybe ironically better remembered son Mustapha Benguergoura also a very good musician but not of the same stature. I would like more information about him and if anyone knows of any other recordings with him please let me know. It is a short but beautiful piece and in one short passage you can also here them singing the refrain in unison! I could listen for hours to his wonderful voice. But it gets even better, the next track on the B-side, and also the longer one, has Dahmane Ben Achour singing in full splendour! His torn yet smooth voice soothing and hovering with a withheld glow but with a constant passion that can draw flames from totally consumed cinders, it always moves me deeply and kindles my flame for hopeless passion. "The only true and pure love is the unrequited love. the only true believer is he that is of continued faith without any hard proof". The Sufi sentiments of loosing oneself submersed in love, runs deep in these musical passages. 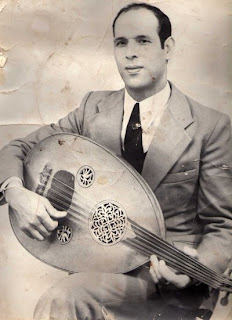 Sheikh Ahmed Mellouk was born the 3rd of August in 1931, in the densely populated neighborhood of El Qorrane in the old medina of Tlemcen. At nine years he was already an orphan, and from a young age, he learned to play the "fhel" (a kind of flute) and the"guimbri "(a stringed instrument made of a turtle shell) which he played brilliantly. At 12, he sang beautifully and mastered all sorts of other musical instruments. In 1959 he founded the association "El Hawa el Jamil", so named with a reference to a Qacida composed to him by Dr. Mohamed El Cherrak Ghosli that he adopted as prelude music but probably also from the name of the neighbourhood were the old radio station in Tlemcen that he frequented regularly for "live recordings"were located.

He participated in many festivals, and obtained several remarkable prices, particularly in Algiers where he received first prize at the International Music Festival "Sana" in 1967. He was so much more than a conductor, Sheikh Ahmed Mellouk was actually a man of many hats in his orchestra, combining the various titles of singer (moutrib), "Lombard" (zernadji), lyricist (cha'ir), composer (moulahine) luthier (maker of musical instruments), muezzin (mouadhine) ... Something that also shows in his family which in itself almost have the full setting of an orchestra, through his sons Nasreddine (mandolin), Talib (mandolin), Abderrahim (violin), Abdelouahab (banjo), Sid Ahmed (keyboard and zorna) and through his two brothers Mohamed (nayati) and Habib (lute) in addition to his grand-son Imad (percussion) ...
He was the victim of a bomb in 1997 but as inforrmation about him is very hard to find it is virtually impossible for me to find out if he survived or passed away. Very few traces are left of him even though he is mentioned with great respect whenever he is mentioned.

(my searches reveal nothing, maybe you can help)
El Hadj Medjber (Blida N.D?) 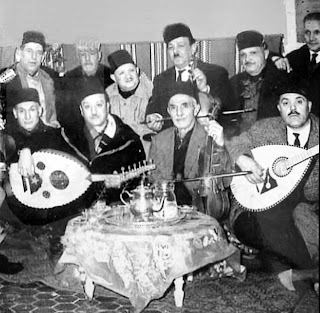 Mohamed Benguergoura (to the right, sitting)
Dahmane Ben Achour (to the left sitting with the Oud)


It is really hard to find any information about Mohamed Benguergoura.
All I know, is that his son Mustapha Benguergoura and his grandson (no name?)
and grandgrandson Sid-ali who plays the violin, all are playing Hawzi, Malouf and Saana in Blida. 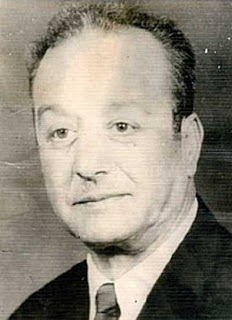 Dahmane Ben Achour musician and singer whose real name was Achour Abderrahmane, born on the 11th of march 1912 in Ouled Yaïch (Blida). Having lived a long part of his life in Alger he died in 15th of September 1976 back in Blida , after an astounding career as a well renowned singer, having started out as with his father as a barber occationally singing for weddings, he gradually rose to fame and became professional. There is more music to be found by him at this blog in a previous post where you can also listen to a live version of Noubat Elh'sine, one of the pieces that together with the Noubat Ezzidane: Ellouzou Fatheh are some of his very best! It does not have all the intensity of Ellouzou Fatheh but it will give you an idea. His rhythmically unbound pieces are my favourite, but it does not matter much what he sings, as he always touches me and makes me feel, that at least I did not waste my life totally, I got to listen to Dahmane Ben Achour, who originally worked as a barber, but rightly became a celebrated singer with his own weekly concert slot on the young Algerian TV!

If you like to compare the singing styles of Mohammed Benguergoura and Dahmane Ben Achour you can listen to a very good clip of the very same song that appears on this record, the "Amlâ ku’ûs al-khilâ‘a" but this time sung instead by Dahmane Ben Achour! Listen here 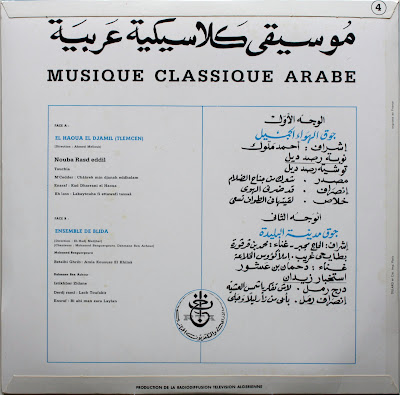 Beautiful, timeless music! Yes bo, side B is so good, but I also liked the instrumental parts at the beginning of Side A.

well my birthday is april 15th so i will listen to this one for that purpose
thank u for keeping the links alive. i hope you are well and yr travels are good.
robert