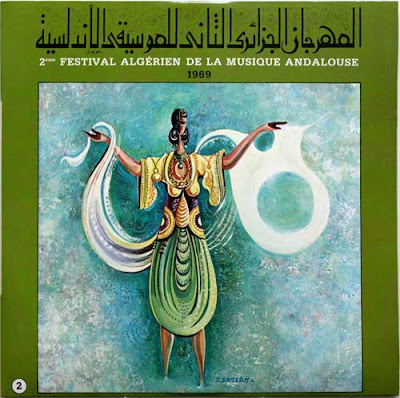 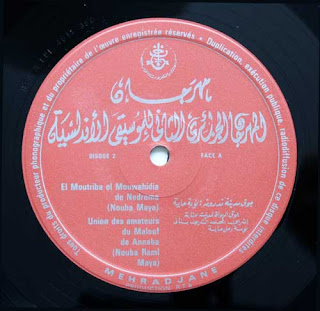 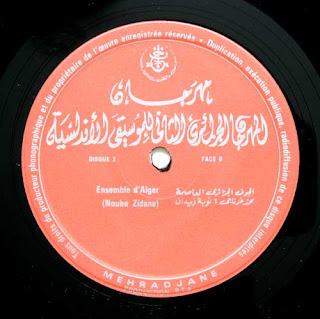 More of the good! Here comes the second disc from the box!

On the A-side you will find a very good singer by the name Mohamed el Ghafour, as well as some fairly early recordings of this Annaba director, violinist and singer Mohamed Cherif Bennani here in his mid twenties leading an orchestra of amateurs.

The B-side is still better with the rich melodious voice of Mohamed Khaznadji interpreting the Nouba Zidane. 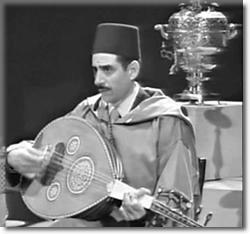 
Mohamed el Ghafour was born the 5th of March, in 1930, in the village Nedroma close to Tlemcen. He started singing professionally in 1948 and became very popular but stopped singing because of the hardships after Algeria's independence from France and it was not until the late sixties when  this festival of Arabo-Andalusian music was first being held in 1966 that he took up singing again. The year of recording this piece he and his group won a price for their participation and he continued to perform at all the following festivals gaining popularity as an undisputed master of Hawzi and Arabo-Andaluse music. 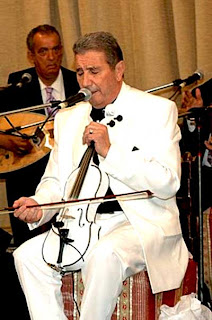 Mohamed Cherif Bennani (called Hamdi) was born the 1st of January in 1943 in Annaba. His uncle was the great master musician M'hamed El Kourd. He started singing at the age of 16 and was recognised by a larger audience in 1963 when he made a remarkable interpretation of a song named Ya Bahi El Djamel. Easily recognisable on stage even from a distance as he never leaves his white violin that gave him his nickname "the white angel" (l’ange blanc). He continues to be an important figure in the Arabo-Andaluse music scene today. 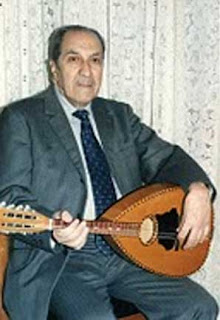 Mohamed Khaznadji was born the 11th of July in 1929 in Alger, his father had a shop selling musical instruments that influenced him early on to devote himself to music and early on he also studied Quran recitation.  During his very long career among may things he was the host of a program on Radio Algiers for a while,  later on he was appointed professor at the Music Conservatory of Algiers and  has cut a large number of records. Here I should say he is still in his prime and I prefer his recordings around the late sixties early seventies when his voice is at its richest and fully mature. 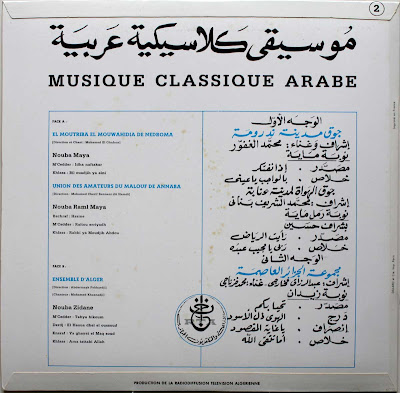 Thank you very much for sharing these gems, bo!

You are so welcome! The one later today (6:09 PM, if you had not noticed, most of my post are set to "go off" at that time!) but the volume tomorrow is the best in my opinion... Need I say Mohamed Benguergoura, and above all Dahmane Ben Achour

The music from Blida is the best ;-)