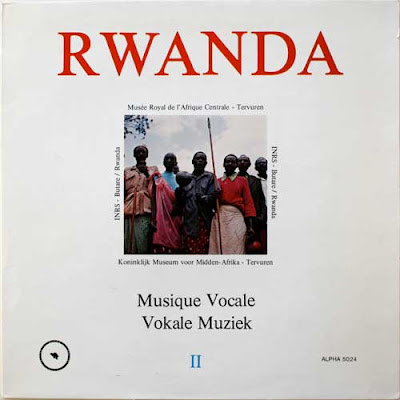 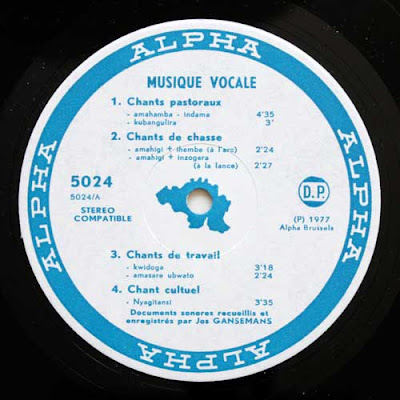 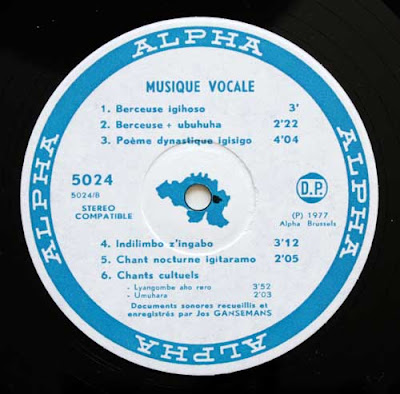 Here is volume two of the Rwanda series from Tervuren. This like the other two comes with several pages of documentation about the recordings that were made by Jos Gansemans during the years 1973-1975.

In the past few decades, knowledge of the musical culture of the Banyarwanda (people of Rwanda) in the outside world was dominated by the sound of ingoma drum ensembles, the direct descendants of the royal drum ensembles of the Tutsi dynasty. Since the bulk of what is available on this musical culture is scattered in records devoted to African music in general or a large region of Africa, the release of these records will be more than welcome to music educators, students, and amateurs of Banyanvanda culture. The three albums in the set contain samples of music from three major repertoires: instrumental, vocal, and dance music, representing musical styles peculiar to the Banyanvanda as well as displaying their artistry on musical instruments (mbira, musical bow, drums) also common in other parts of Africa south of the Sahara.

Ethnographic notes on the Banyanvanda and their land are featured in the first record, devoted to instrumental music. These notes, perfunctorily written by Jos Gansemans in Flemish with French translation, provide no vital information
on the Banyarwanda or their culture, nor do they assist in relating the albums to their proper cultural context. One must turn to a description of each selection for valid historical, cultural, and musical information, some of which is supplemented by black-and-white photographs of the event.

Record I, Side A opens with two selections of epic songs accompanied by inanga (board zither). an instrument whose zone of diffusion is limited to Rwanda. Another musical instrument used by Banyarwanda to accompany their epic songs is the mbira (thumb-piano), known to have been borrowed from Bakongo in Lower Zaire. The playing (Record I, Side A/5) resembles that of the Bakongo and the Luba of Zaire. characterized by the dampening of the keys with the index fingers after being plucked with the thumbs. Iningidi (a bowed monochord lute) is another borrowed instrument which has gained in importance in the north and center of the country, in spite of its recent anival in the culture. This instrument is also prominent in Uganda, where it is known by the same name. Side B contains predominantly the music of aerophones whose playing technique and overall expression are peculiar to this culture. The best example can be heard in Band 4 on ihembe (hunting horn). The last three bands (5, 6, and 7) represent three distinct styles of ingorzadrum ensembles from Rubungo, Rubavu-Gisenyi. and Mibilizi- Cyangugu regions.

In Africa. the Banyarwanda must be counted among those people whose musical cultures are dominated by unaccompanied vocal songs. This is revealed in Record II, devoted to vocal musical styles. Side A contains songs to accompany both solitary and communal work. In a culture where cattle-raising occupies a paramount position in the "cultural focus," the work-song repertoire is dominated by pastoral songs whose subject matter ranges from milking to praising cattles' lineage. Side B, on the other hand, contains cult songs, drinking songs, and lullabies. A unique feature of Banyarwanda vocal style is the lullaby accompaniment (BIZ), in which the singer produces a muted sound by letting the air through his loosely closed lips.

Record III contains music for four types of dances: dances performed by young girls at wedding ceremonies: warriors' dance: intore (dance of the chosen ones); and those of the Twa pygmies. Concerning field recording technique. some of the dance recordings (A/[. 2, 3) lack implicit noises. such as footsteps. In this case. recording technique (context, number and placement of microphones, etc.) is surely pertinent documentation for those interested in ethnomusicological method and training. Otherwise, Jos Gansemans is to be congratulated for a fine
technical production. 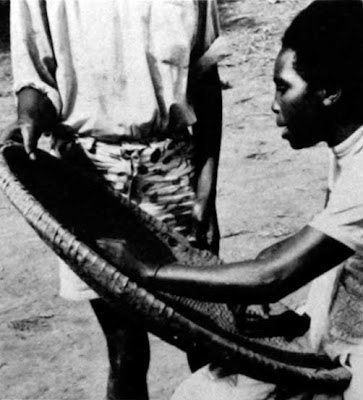 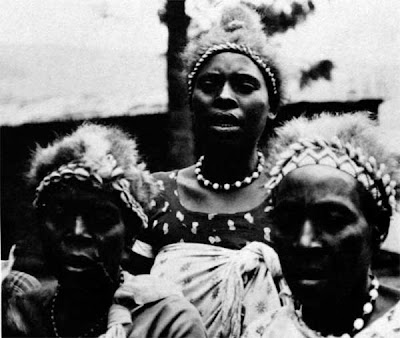 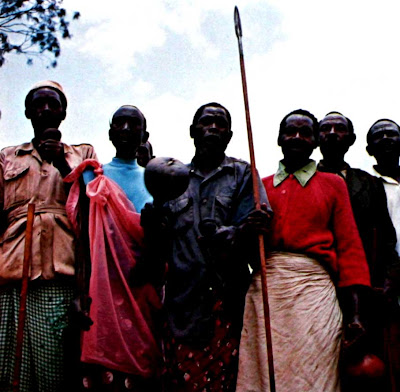 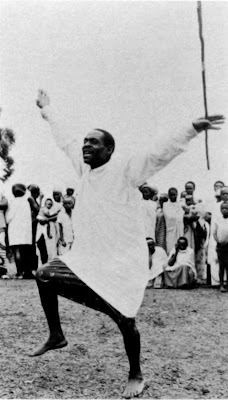 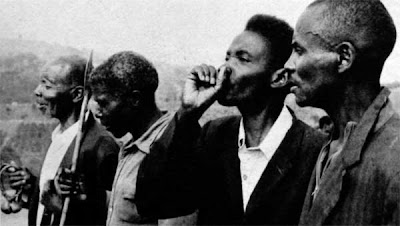 Hunters With Spears Singing Songs Of The Hunt. 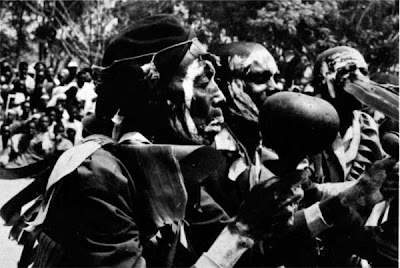 Men with painted faces during Umuhara. 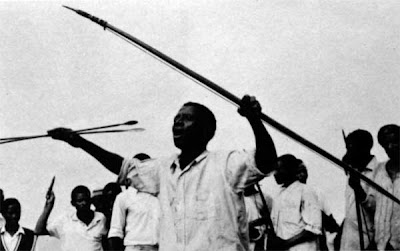 Hunters with bow and arrow. 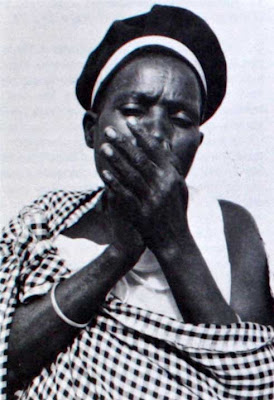 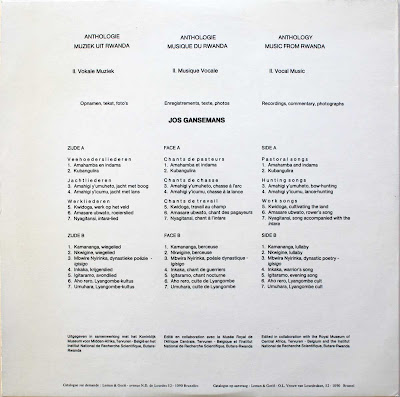 Phenomenal recordings and priceless from a documentary point of view as well. Records like these make a strong case for the importance of recording traditional music...who knows how long they will last! From the pictures and the music, its easy to sense the bucolic calm that once was Rwanda. I would like to be optimistic, but I know its a little too much to expect that much of this music might have survived the years of carnage and change in Rwanda. If some of it has, its a miracle.

Does anyone know if these traditions still survive?

Thanks for this series, bolingo. Exceptional music and selections. Beats me why such material isn't reissued!

Wonderful!! Thanks a lot, Bo!