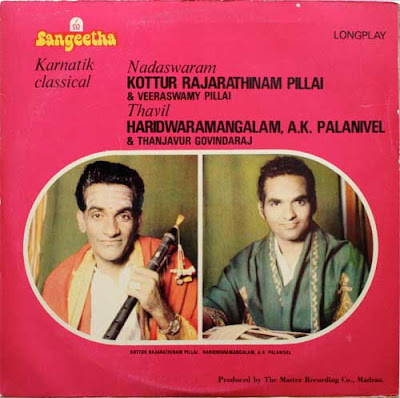 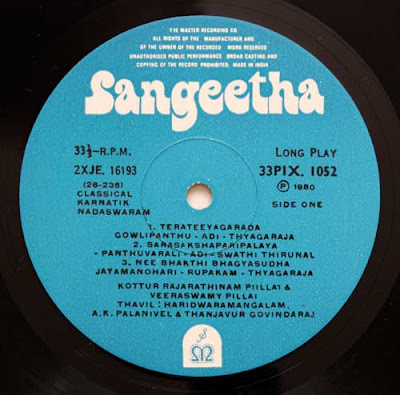 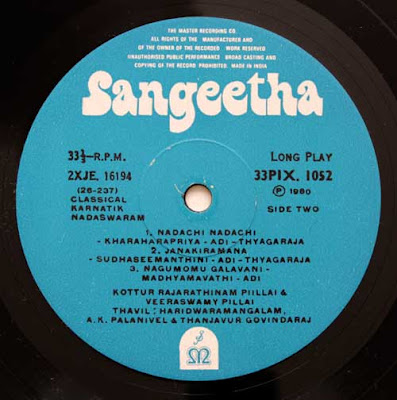 Short notes on the artists from the back of the sleeve:

Sri Kottur N. Rajarathinam learnt the art of the Nadaswaram under his grandfather, Kottur S. Sowndera Raju. Later he developed the art under Tiruvidaimarudur P.S. Veerasamy Pillai. A very popular artist in Nadaswaram, Sri Rajarathinam has many titles to his credit.

Sri Haridwaramangalam A.K. Palanivel learnt thavil, a percussion instrument under his father Kumaravel Pillai. Later, he was a disciple of Tirucherai T.G. Muthukumaraswamy Pillai. He has many titles to his credit. He made a performance tour in USA and Canada for two months and has visited Srilanka on several occasions. 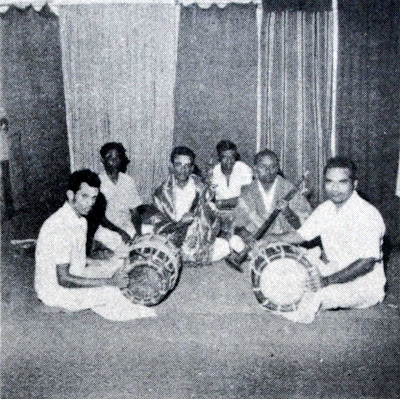 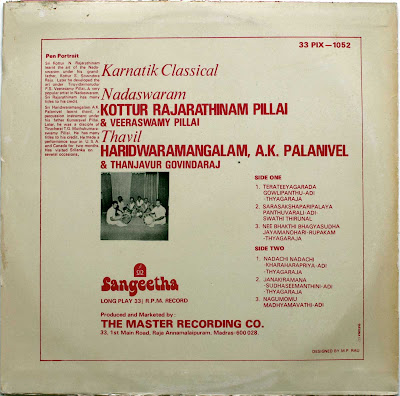 Wow! This is a very sweet surprise and again, some fine synchronicity! Just last week I found out about a gentleman in South Tamil Nadu who has an archive of live Nadhaswaram recordings, including a significant amount of performances by Karukurichi Arunachalam, Thiruvidaimaruthur P.S. Veerusami Pillai, and yes, Kottur Rajarathinam Pillai. After some searching around, I think I've found what seems to be his contact, and I was thinking of writing to him sometime soon.

Needless to say, you will know if I manage to establish some communication with him and if anything fruitful comes out of it.
;)

I can't tell you how happy I am to see this record here, and I haven't seen it even once on my record hunts!

A thousand thanks, bo!

Wonderful, soulful playing! Thanks for introducing me to some more artists I didn't know about, Bolingo!

My dear friend Arvind brings to my attention that I must have forgotten to wear my head on tight when I uploaded this one. The folder where the photos of the scans are supposed to be safely stowed away was gaping empty!

here is a fresh link with the sleeve and label photos only for those who have already downloaded the file. http://www.multiupload.com/QM33PJSYZ4

and the post itself will in seconds be updated with a new link to the complete files.

Thanks a lot for telling me Arvind!

Nice Stephen that you are enjoying this! There will be many more Nagaswaram recordings to come but there are so much good music practically forgotten so it may be a little while before we return to the temples of South India.