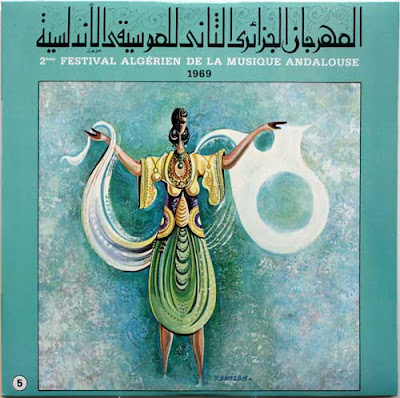 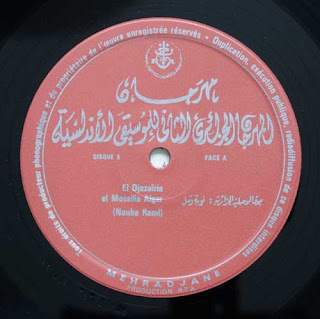 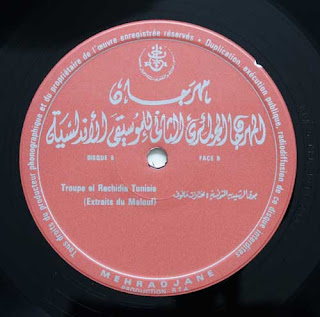 Here we have the fifth LP with two more legendary musicians. First side is devoted an ensemble led by the popular târ player El Hadj Hamidou Djaïdir who had very long career and accompanied many of the best artists during his lifetime. On the second side of the LP we find Salah El Mahdi, musicologist, chef d'orchestre and composer from Tunisia.


The percussionist El Hadj Djaïdir Hamidou born in Algiers the 26th of January 1923 and died the 14th of May 2004. He joined the music association El Djazairia in 1937, encouraged by his uncle and by his friend and violinist Mustafa Kasdal Abdelkrim Mehamsadji when they were both apprentices to become shoemakers. After a short spell of playing mandolin he took up the darbouka and his first teachers then were Mahieddine Lakehal and AbderRezaq Fakhardji, two monumental figures of the Çan'a Algiers.
From the late thirties and onwards he was a sought after master percussionist that accompanied many of the great' and gained a lot of his popularity when playing with Lili Labassi in the fifties. He held many positions at the Radio Algiers and from 1973 he was the bandleader and permanent member in the orchestra of the cultural and musical association Mezghennaat. 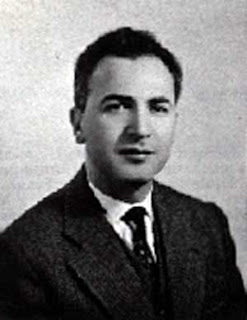 Salah El Mahdi (صالح المهدي) whose real name was Mohamed Salah Ben Abderrahmane Ibn Mehdi Chérifi, born on the 9th of February 1925 in Tunis, he was a musicologist, chef d'orchestre and composer from Tunisia who supposedly also composed the National anthem of Tunisia. I understand that there must be several versions as one is alleged to have been  composed by the Egyptian Zakaria Ahmed and another by a Syrian composer. I do not know which one is referred to. 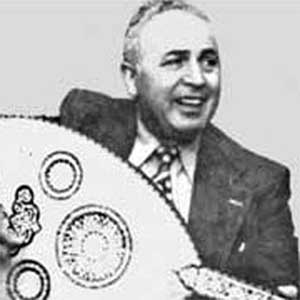 Another photo of Salah El Mahdi
maybe taken closer to the times of these recordings.

More to read about him here in the French Wikipedia.

To enjoy a small video clip where he proves himself to be a good oud player and in command of a rich and sonorous voice I suggest you click here the sound is not fantastic but the music is good. 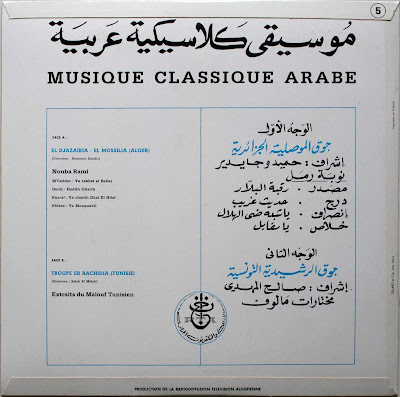 Great series, thanks a lot Bolingo!

Thank you for being delighted and for your praise ;-)

are there time-of-day or time-of-year associations with these pieces as (according to what I read, anyway) there would be with Iranian dastgah or Indian raga? i remember reading that in the old days, a complete Nuba would take a day or several days to complete. and i think at that time they talked about various associations at least with mood, color, season, but i don't remember...?

Anonymous were asking if there are associations of time, mood, colour, season etc. in the "pieces". There are certainly such connotations but I find it hard to go into any real detail in these comments.

Let me just quote from a passage in one of the accompanying leaflets to the magnificent "Anthology "Al-Âla" - Musique Andaluci-Marocaine". Published in 11 volumes of 6-8 CD's per Nûbâ.
Quaint as it may be the English rendering of the notes originally written in French are certainly better than any google translation. Not being a native speaker of either language I refrain from changing any of their wording but I guess I might caution you that the word used "humour" may be better understood as "mood" or "sentiment"., and the order of words is not always the smoothest...

Anyhow It reads as follows:

According to ancient theories, the 25 Moroccan modes or tubûc are divided between principal modes or usûl (sg. asl) and furuc or derived modes and represented by a tree diagram.

There are five usûl: dhil, zaydân, mâya, mazmûm from which derive all the modes of Andalusian Moroccan music, and al-gharîba al-muharrara,
single asl from which no other mode derives.

Each of the first four principal modes has a corresponding complexion
or humour (melancholy, phlegm, blood and choler),
an element (earth, water, air, fire),
a season and hence a vein of being or "modal feeling" which is conveyed to its derivatives.

This theoretical representation was expressed in the
16th century in a long poem by Abdelwahed al-Wansharîsî. The first verse, "The universe is composed of four characters..."sums up perfectly the cosmogenic theory of this dividing up of modes.
In today's al-ala repertoire, the choice of modes of each nûbâ involves a constant crossing over between these different categories. For example, the nûbâ al-rasd is based on the rasd mode derived from asl mâya and employs as secondary modes the asl saydân, its derivative lahsâr and asl mazmûm. This cross-referencing results in a diversity of expressive
colouring for each nûbâ.

The table may make more sense, and line up better if you copy it to your text-editor or word processor of choice.

There are some very good books and articles written on the Arabo-Andalusian music but most is in Arabic and French. Let me suggest just three useful books if you want to dive deeper than Wikipedia into this subject (again the French is a little better than the English version).

The first one is an introductory volume that is in no way shallow but not too academic. The other two can be more demanding but are quite full of dependable and useful information.

Hope that is useful to someone...