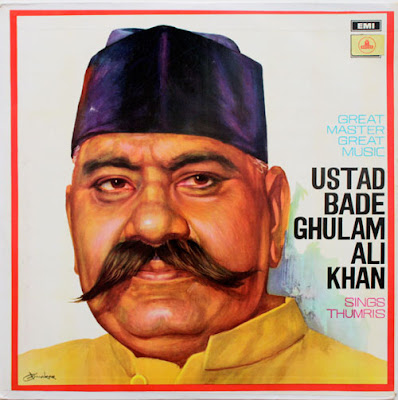 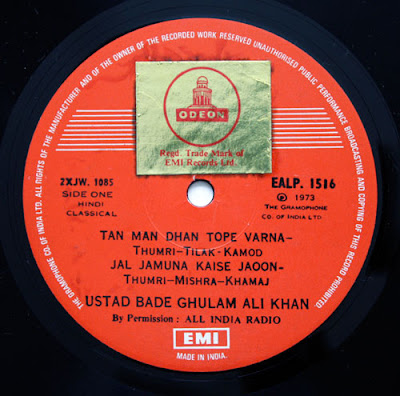 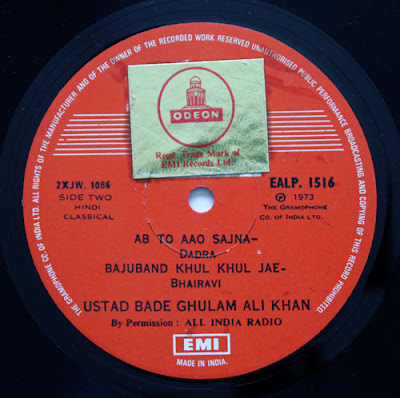 Bade Ghulam Ali Khan of the Patiala Gharana
Ustad Bade Ghualam Ali Khan (c. 1902 – 25 April 1968) one of the greatest classical vocalist during the previous century, was born in Lahore, Punjab into a family of Musicians. His father Ali Baksh Khan was a well known vocalist and Sarangi player, while his uncle Kale Khan was also an extremely renowned musician.

Ustad's fine musical voice, intelligence and innate discipline contributed to his great success as a vocalist. Bade Gulam Ali Khan trained rigorously under Kalle Khan, his uncle, for 10 years , practicing from dawn to midnight. He was unsurpassed as the master of 'Thumri' Tradition. The Ustad's melodious voice had an effortless range and style which gripped the listeners. He has recorded several Khayals and Thumris. Some of them are 'Yad piya ki aaye', 'Katena birahaki raat', Tirachhi Nazariya ke baan', 'Premke fandeme aakar sajani', 'Aaye na baalam', 'Kya karun sajani', 'Naina more taras rahe hatn' and 'Prem ki maar katarand' these albums recorded many years ago, are still popular with listeners not only in India but also abroad.

Bade Gulam Ali's study of music was extensive. He had knowledge and definite ideas about any aspect of music. During partition he went to Pakistan but came back and settled in India where he had innumerable admirers. His brother Ustad Barakat Ali Khan, and Bade Gulam Ali's younger son, Munawar Ali who always accompanied him on the tanpura and imbibed his father's musical knowledge, are talented in their own rights. Ustad Bade Gulam Ali Khan passed away in 1968, leaving behind a priceless and glorious heritage of music. 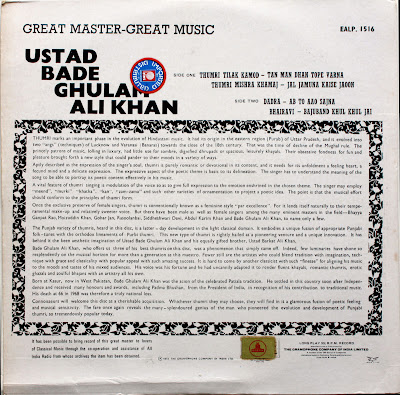 wowl. what a stache on that bra. thx fer sharon!