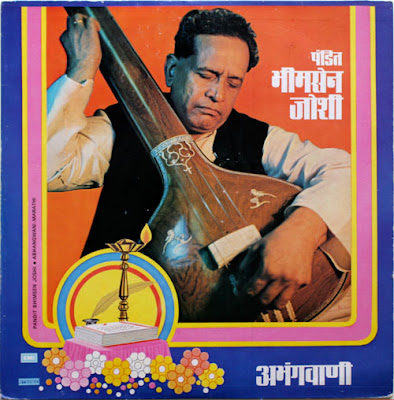 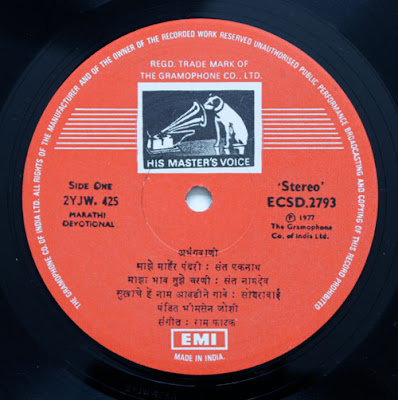 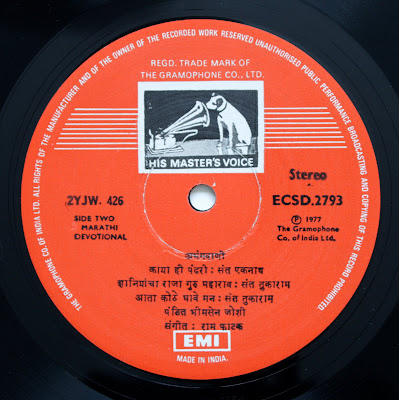 All these previous posts feel incomplete without a few of Bhimsen Joshis devotional records, especially if we are to understand his enormous popularity in India. Here is a record that was given to me by a woman friend who also studied bhajan singing. She bought this and some devotional songs by M.S. Subbulakhsmi when she visited Madras in 1984 and liked it very much. This is not typical, as the many friends I have here in the occidental countries, have often frowned when I played them some of his devotional music and they often find it too simplified and usually wave it away as superfluous and as being too light music. One of my friends, a well known composer, who really love Bhimsen Joshis classical vocal, even forced me to stop playing one of Joshis devotional records once, and said that he found it below Bhimsen Joshis dignity to sing such "kitchy" music and he was seriously disturbed by it. I hear similar sentiments often and for sure, I agree that there exists some rather dismal devotional music and much that is being produced especially contemporary should better remain unheard, but Bhimsen Joshi was definitely one to elevate it. Fortunately not all feel like my composer friend, and I for one, get very excited by his songs and find myself in a most exuberant mode upon listening to this record. Hope it will please you also.

My good friend Arvind in Madras, with whom I share much of my musical taste, who kindly helped me to transcribe the names of the tracks, wrote me the following most informative note upon discussing this record:

"Some thoughts on the record and the music. Pandit Bhimsen's incredible popularity can be attributed to a large degree to his devotional music, especially the abhangs in Marathi (featured on this record) and the Dasara Padagalu (songs by Purandara Dasa) in Kannada. Abhangs are devotional hymns by Marathi saint-poets of the bhakthi tradition, like Tukaram, Eknath etc, and they're all written in praise of Lord Vitthal, a form of Vishnu and the presiding deity of Pandharpur. Its my opinion that Bhimsen's popularity would have been restricted to the usual circle of classical aficionados, had he not made these highly successful records and cassettes with Abhangs and other devotional music. His popularity in the hindustani tradition can be suitably compared to that of M.S. Subbulakshmi's in Carnatic music, who also sang lots of devotional songs and bhajans, and is known for these by many thousands of people, most of whom don't follow classical music. So these were really stalwarts, and they deserved their Bharat Ratnas in every way!"

He also contributed this elucidating note on Abhangs,

"Abhangs are a sublime form of Indian Music whose origin can be traced to the spiritual ideologies of the bhakti saints of Maharashtra. Essentially these compositions are bhajans in Marathi sung in praise of Lord Vitthala (also known as Vitthoba) of Pandhrapur. They are characterised by simple appealing tunes and meaningful words. The meaning of the word Abhang can be derived from its root “A-bhang”(that which has no bhanga or hindrance). Abhang literally translates into “that which does not stop”. There is no stoppage between the verses or the main line and the verse; an abhang does not pause until it actually ends. Abhang also means “compositions that would never be wiped off the face of the earth.” It is eternal, ever new and always full of life."

One of the major saint-poets that wrote abhangs was
Sant Tukaram.


You can hear two abhangs by him in this record.

in the back of the picture you can see
Lord Vitthal. 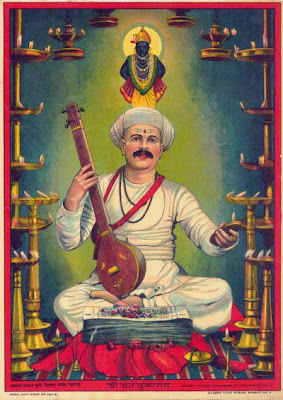 On the pictue below you can see


seated at the harmonium 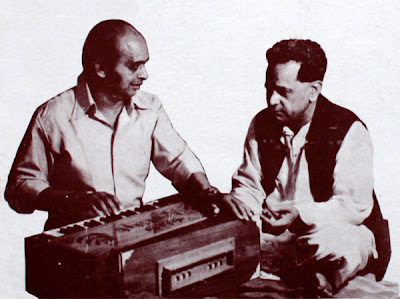 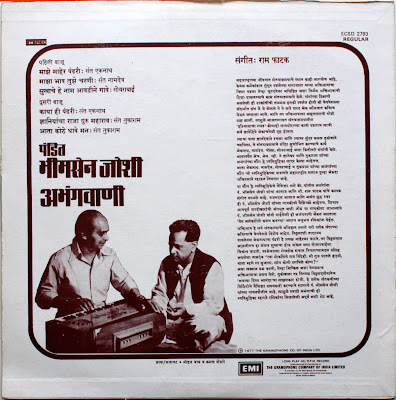 so fuggin rad! killin me softly with his song

I think this (often) misplaced elitism directed towards Indian classical music, and the corresponding bias against devotional music is largely an occidental phenomenon.In India, the line dividing classical music from devotional music (presuming that both are good) is very tenuous. Most people who listen to one, freely listen to and appreciate the other as well, and the musicians themselves sing both devotional and classical compositions in their concerts. Actually, it isn't uncommon to see well-established classical artists becoming more popular for their devotional albums, like in the case of Bhimsen Joshi.
To a large extent this well-defined categorization into genres is a purely western concept. For the average Indian listener, the two genres are often very closely linked, even inseparable. Classical music, esp. in the south, but also in the north, has devotion as its main theme. I know many listeners who go to classical concerts not just to appreciate the art in the performance, but also to be moved by the devotion that the words are often filled with.
It can also be said that most of the good devotional compositions are based (sometimes loosely, sometimes not) on classical ragas or on a combination of ragas.
So this bias is unnecessary. What we can listen for instead, is how good the music is, and how much it moves us :)

Ashok D. Ranade writes in his chapter on Devotional Music in India the following.

"Indian music is repeatedly described as devotional. This description, though intended as complimentary, causes discomfort to practicing musicians and perceptive musicologists who follow the performing tradition alertly. The truth of the matter is that no music becomes devotional because its maker was/is in a devotional frame of mind while making it. Categories become real when performer's intent, musical content and formats of presenting music firmly unite to produce a sizeable musical corpus. The norm applies to devotional music.

He then goes on to compare Bhakti and Bhaj with the Middle Latin devovere and the dissimilarities of these concepts, quite an interesting line of reasoning too long and detailed to relate here but if you don't have access to the book I'll scan the few pages if you like. It is not only a occidental, oriental dichotomy of the concepts devotional-Bhakti, but also within India itself it shows some differences depending on social context, don't you think?

Yes, I'm aware of this point of view. I've seen instances of when a classical concert was presented in what can only be described as something close to a "devotional setting", that is the musician was aware of the devotional aspect of the compositions and presented these with specific emphasis.
The reverse is even more common of course, where the setting is concentrated on the aesthetics more than the devotional aspect, but even so, its always in the back of the mind of the musicians and the listeners that the compositions are intrinsically devotional. Whether to call these devotional or classical, is up to each person...its difficult to classify it so easily, but Ranadeji's argument is important in this respect.
I'd love to read what he has written in his book. If it wouldn't be too much of a bother, please share the scans for those pages (when your fingers are feeling a little better)....hopefully, I'll find a copy of that book soon.

Hi Bolingo69: thanx so much for all the great working you are making by uploading all these records, nowadays impossible to find. I've been asking for this record, I hope you got it: Coptic Music by Smithsonian Folkways (1960) hope you can post it.
Greetings from Argentina!

Christian, as you might already know, all Folkways recordings can be downloaded from the Smithsonian website, including the one you ask for (@ $6.44): http://www.folkways.si.edu/TrackDetails.aspx?itemid=29139.