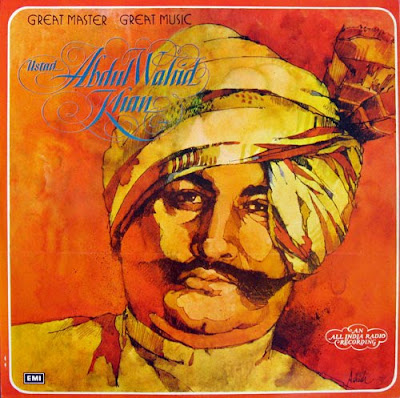 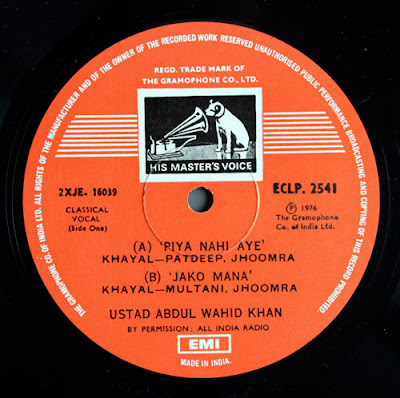 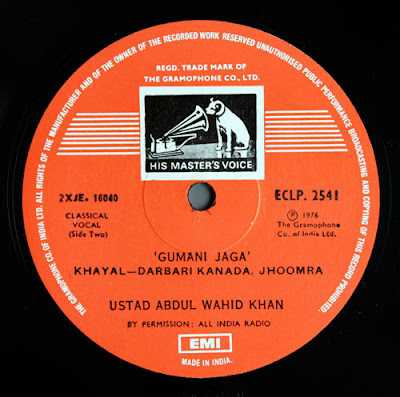 Abdul Waheed Khan of the Kirana Gharana
Ustad Abdul Waheed Khan (b. 1876? d. 1949) was regarded as the second among the great vocalists of the [Kirana] gharana, but, to some extent, he was overtaken by his cousin Abdul Karim Khan. He used to sing with a full-throated voice and was an unparalleled alapiya. He developed the 'Mirkhandi' style alapa, somewhat similar to that of Karnatak music. Actually, the style is known as 'Khandameru' in our ancient musicology (i.e. swara-prastar-kriya of notes)...The style influenced several musicians. Ustad Amir Khan was one of them, who, though not his disciple, absorbed the individual characteristics of his style to such an extent that Waheed Khan was highly pleased and blessed him. Waheed Khan lived a religious life and was a devotee of Pir Hazrat Ali Nakki. He used to seek the Pir's approval for all his engagements and performances. He left Bombay and settled in Lahore, where he died in 1949. He was a generous teacher and trained...Begum Akhtar, Hirabai, Pran Nath, Shaqur Khan and Sureshbabu Mane.


(quoted from Musicians of India by Amal Das Sharma)

Abdul Waheed Khan forbade recordings of his performances to avoid imitation by other singers, and therefore only three of his performances survived, namely these recordings of the ragas Patdeep, Multani, and Darbari Kanada, accompanied by Ram Narayan on tambura and Chatur Lal on tabla. They were preserved by music producer Jivan Lal Mattoo, who secretly recorded a radio broadcast in 1947, to document Khan's style.

I hope the high quality of the music will make up for for the flawed recording techniques and pressings that are made manifests here. If not, the mere scarcity of these recordings might be enough compensation. As usual, the original LP is in perfect condition and has previously been played only a few times. 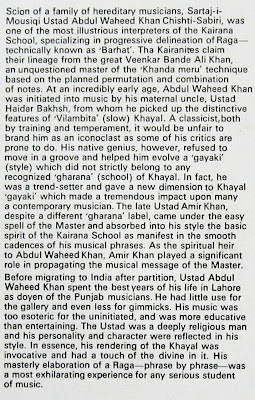 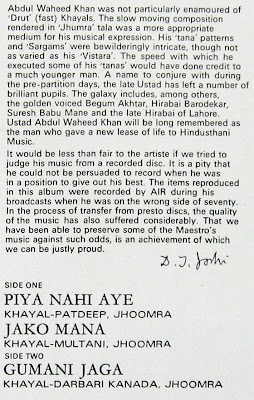 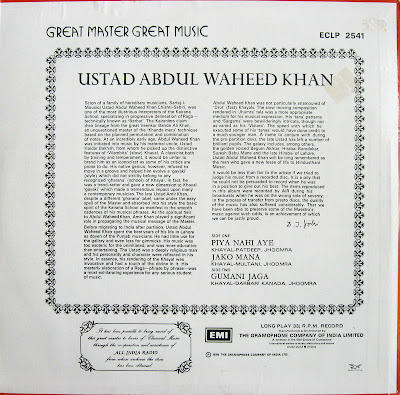 A real gem of a record! Thank you so much for sharing so freely from your treasure chest, bo!

I should very much like to download this music, but it appears the link is down. Thanks for the work putting these up in such a clear and beautiful format.