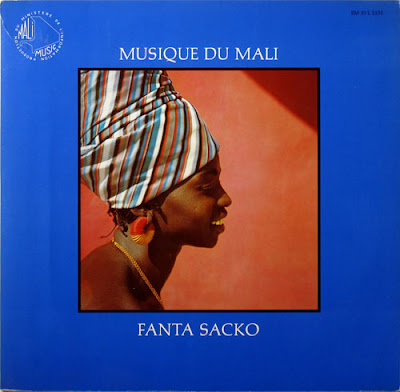 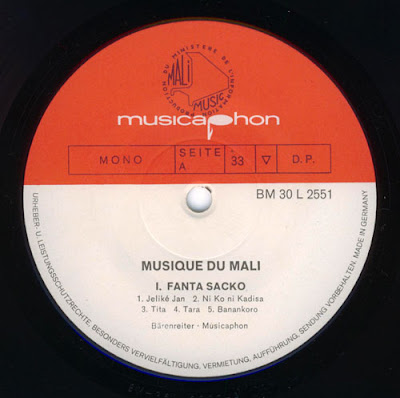 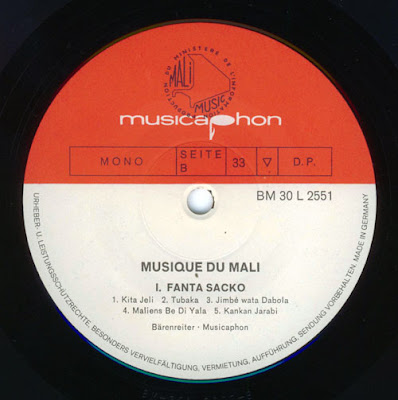 Wikipedia has only this to say:

Fanta Sacko is a Malian musician, whose debut, self-titled LP launched the bajourou music genre. She has helped establish a female singing tradition in Mali, which makes that country unique in West Africa, where female popular musicians are not generally approved of.[1][2]

Bajourou (meaning 'big strings' or 'big tune') is the name given to a strain of Malian (Mali) pop music usually played at weddings and social gatherings. Though now predominantly electric, its roots were in 60's acoustic music that borrowed patterns from the kora and the donsongoni (a hunting harp/guitar) and transferred them to acoustic guitars. Lyrics moved away from the usual Manding praise songs to more secular, romantic concerns, mainly sung by women like Fanta Sacko who did much to develop and spread the music. 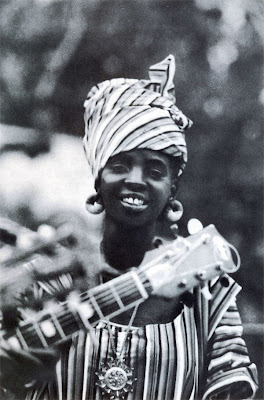 Not much to read of biographical information on the web, but then again my good and knowledgeable friend Stefan, at wrldsrv.blogspot.com, who was kind to take the time to make the rip and the great scans, and also painstakingly edited and carefully pruned the files to get them as free from clicks as possible, has this to say:

By the way: most Malian musicians I have spoken with did not know this Fanta Sacko. Some say she must have slept with the producer (or another person in charge) to get this record made. Zani, who been in the business since the early 1960s, was sure she was Guinean, after hearing the record. Flani said it was a teenager girl from a village singing. At least it is certain that she was/is from the south of Mali or the north of Guinea. 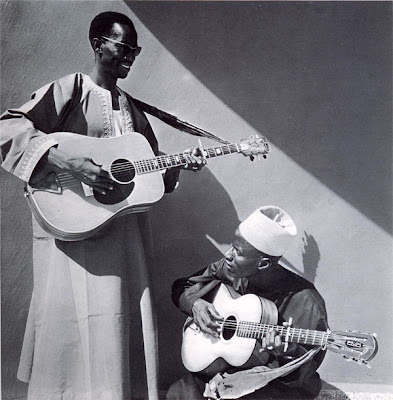 The stringwork by Foussenou Diabaté and Mamadou Tounkara is most enjoyable and I much rather listen to this young girl sing than thousands of other boys and girls that gets recorded, especially as the music and the tradition is often stronger than the individual aspirations.

Anyhow, we all have our own ears, so I'll let you judge for yourself...

I must admit am a terrible "completeness" junkie and even though my collection of records is not small I don't have everything, so again thanks to Stefan for his good help to fill in this lacunae in the catalogue!

I am also hooked on having multiple version rips of course preferably from different copies but also experimenting with post editing. So because of that, I also give you two versions to choose from. The first one is probably more true to the original and may have a better lustre. But for those with a severe allergy towards hiss and clicks the second one may be tried for size.

Personally I just listen to the music and it seems my ears have grown their own filters over the years of listening to old crackly acoustic 78 rpm recordings from China, India and Egypt. The best school for that I think was the old worn Charley Patton recordings I listened to in the sixties. 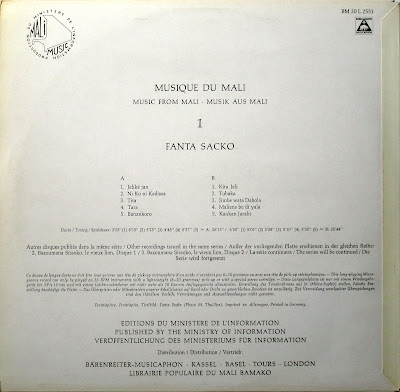 god didn't anyone commented thus far?
or bo didn't post the comments yet?
thank you both for both

So this must Fanta Sacko be the Amy Sacko aunt and singing teacher.
The truth is that from the first listen, his voice is very evocative.

It seems that she retired because of health problems caused by the skin bleaching based of mercury.

I'm really enjoying this series of Mali, some albums are new to me, I hope to have some more time to enjoy the listen and comment in the near future.

I am immensely grateful to you.

staggering drop my brother. we're chin deep in the honey now. thanks as ever

Thanks bolingo and Stefan for working together to bring us this record! We could do with many more such collaborations in the blogosphere; I feel there's very little we can't unearth if we all got together like this and shared our collections.

Also, thanks Ngoni for the link to information on Fanta Sacko.

Lots of jarabi to all of you :)

Thanks to bo and Stefan for that one, which is pretty rare to find.

....Zani, who been in the business since the early 1960s, was sure she was Guinean, after hearing the record. Flani said it was a teenager girl from a village singing. At least it is certain that she was/is from the south of Mali or the north of Guinea.

So why is she on that important Mali anthology??

Looking at "Mande Music", by Eric Charry, might enlighten that question:

"...Fanta Sacko, from Kankan Guinea, knew the music of Facelli Kante and Fodeba Keita well, (Duran 1989), and her recording has a particularly Malian signature, where the guitarists play the kind of hammering on and pulling off typical of sahelian lute music that distinguishes it from Guinean recordings...."

Bolingo, thanks a lot for Fanta Sacko - I had the other Malian recordings, but not this one. Great post, as usual.

i was going to practice some blogging abstinence for a while but this - yet another - wishfulfillment of course has priority. my belated thank you thank you thank you for this terrific post and everything that you already liberated in the new year. you are a truly benevolent president!
btw funny that stefan did the rip of fanta sacko since i had humby requested this album at his blog a long time ago before i had asked you. strange ways of the blogosphere!+
lovingly
lc

Thank you so much for your scholarship and generosity. I've been hoping this would turn up--very rare and beautiful.

Just now getting around to listening. What a great voice!

Very interesting comment A.
I guess have to get a copy and read the "Mande Music"

Ambrose, great to find at least something you did not already have, it is becoming increasingly harder me thinks ;-) Still I have some hopes that the future will unearth some more.

Sorry being so late at observing the comments, I now and then forget because there seems to be no way to have automatic notification of the comments unless making one and then asking for followups from each post... Hm, have to figure out a better way. I am sure there are several other unintentionally neglected comments...

Sorry about that and excuses in advance.

Thank you also Nauma and Ngoni and Vic and all other honeydrippers! ;-)

One of the first os these "stars" who set the pattern for the younger generation was the Kita singer Fanta Sacko (born about 1930). As a child she travelled extensively between Guinea and Mali with her father, the kora player Amadu Sacko. At this time a new style of music was emerging in Mali, ...

Hmmm... would love to hear this one, after reading all the comments. Is it possible to re-up the file? Thank you.

@Jaime
It seems that the nation is latent, if the culture minister Luobaniyan still prisoner of his affairs, you can get my mail on my profile and I will attend you as an honorary citizen.

Horor place people will take interest to see this.