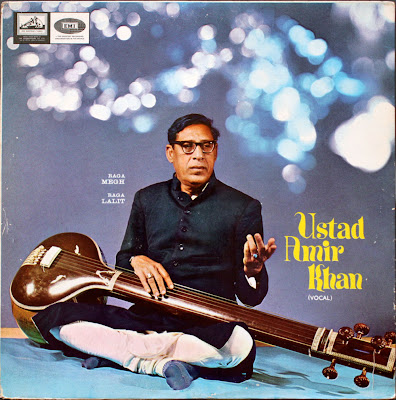 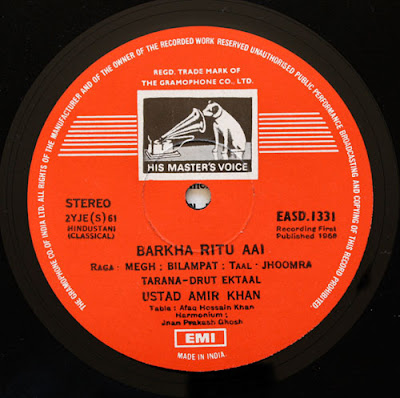 B1 Lalith - Kahan jaage raat
B2 Jogia more ghar aaye (B1,B2 are presented in one track) 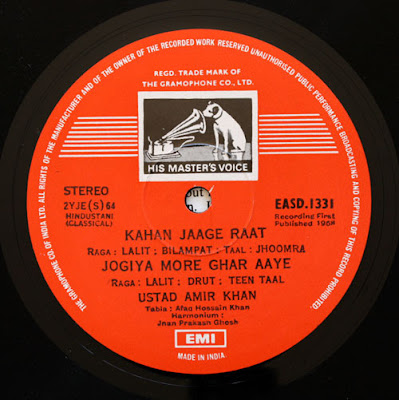 Amir Kahn of the Indore Gharana

Amir Khan, born August 15, 1912 – February 13, 1974, was a well-known Indian classical vocalist. He is considered one of the most influential figures in Hindustani classical music,
and also founded his own Gharana, the Indore gharana, that was carefully evolved by him. He studied the styles of Abdul Wahid Khan, Aman Ali Khan, Rajab Ali Khan and Abdul Karim Khan and amalgamated the essence of the styles of these four maestros with his own intellectual approach to music, and conceived the Indore gharana of music.

Amir Khan was born in a family of musicians in Indore, India. His father, Shahmir Khan, a sarangi player of the Bhendibazaar gharana, served at the court of the Holkars of Indore. His grandfather, Change Khan, was a singer in the court of Bahadurshah Zafar. Amir Ali's mother died when he was nine years old. He had a younger brother, Bashir, who became a sarangi player at the Indore station of All India Radio.
He was initially trained in the sarangi by his father. However, seeing his interest in vocal music, his father gradually devoted more time to vocal training, focusing on the Merukhand technique. Amir Ali was exposed at an early age to many different styles, since just about every musician who visited Indore would come to their house, and there would be mehfils at their place on a regular basis. Also, he learnt the basics of tabla playing from one of his maternal uncles, who was a tabla player. Following his father's advice, in 1936 he joined the services of Maharaj Chakradhar Singh of Raigadh Sansthan in Madhya Pradesh, but he stayed only about a year. Amir Ali's father died in 1937.
Amir Khan moved to Bombay in 1934, and there he gave a few concerts and cut about half a dozen 78-rpm records. Later, he lived for some time in Delhi and Calcutta, but after the partition of India he moved back to Bombay. (Read more...) 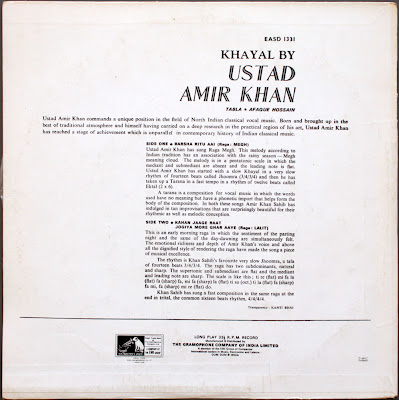 Wah, wah, wah!
My deepest & heartfelt thanks for sharing the music of these unbelievable Ustads .
Amazing records, indeed!

Thank you for your kind comments Giri Mandi. And by all means, do stop by now and then. I promise much more of the worthy music will appear here!

Of course I'll stop, insh'Allah! Mouthwatering for the hindustani delicacies (Abdul Karim Khan, wah!) you are listing...
By the way,do you know the majestic collection of live hindustani shared by Dr Ashfaq from Lahore? Truly amazing, and ordered by gharana-s.
Well, I don't want to seem an hindustani music freak (yes, I am!): I am cherishing all your blog, many thanks & best wishes!

I will come back to Hindustani music soon enough but I will post some other things that has been waiting in line for a long time. holistics generous shares I am familiar with but I find it very hard to wallow in his collections because of the amount of material to winnow through. Much of the material is already familiar to me but the amount makes it hard to get a quick grasp of what is new! Anyhow the more shares the merrier but to me impressum and provenience is really part of the enjoyment.

I agree! Holisitc's depot is rather chaotic and discouraging in its vastness and vagueness, even if filled with shining, rare and precious gems.

Actually the covers of those old hindustani LPs are for me a marvel in itself, and I felt a deep joy seeing Pannalal Ghosh cover art in your blog,when I usually greet it in my drawing room!

And the Malian interlude is absolutely ammaliante*

Thanks very much for posting all of these treasures. I'm mostly into Hindustani classical, but I really enjoyed some of the other world music LPs, too. If you happen to have Amir Khan's Darbari+Marwa LP, could you upload that? Here's the LP cover image:
http://www.recordsindia.com/cart/images/uploads/ameer_khan_hindi_classical_.gif

First of all, I want to express my sincere gratidude for uploading these wonderful recordings! You're blog is an amazing treasure.
But none of these links work, unfortunately. Could you please upload these again?
I would be more than thankful.

Gradually there may be more live files.

Hopefully Bhuvanesh and Omar has not given up on the Luobaniyan order … Things appear slow sometimes but it is really an illusion everything is per definition going way to fast!

Dear Bolingo, I am lucky enough having this gem downloaded in time. However let me tell you that I consider you, Tawfiq, Xyxy & C contemprary heroes, struggling against all odds to share and spread beauty. Enduring thanks for your commitment... mabruk!

What a blog!
This is the first blog which worth that much...I must salute you sir.
I think because of your golden collection you are now one who must be awarded. This blog must have some promotion....you made me your fan, now I will promote it, again thank you for your time, hard works, for all the sacrifices that you have done to collect the legendary melodies, Thanking you sir, I will regularly visit this blog as a honey bee...

I'm getting an error when trying to download this via mediafire:

"Lalit" by Amir Khan may be available for download from Amazon.

Could you upload all the Amir Khan recordings on some other site, perhaps? Thanks!