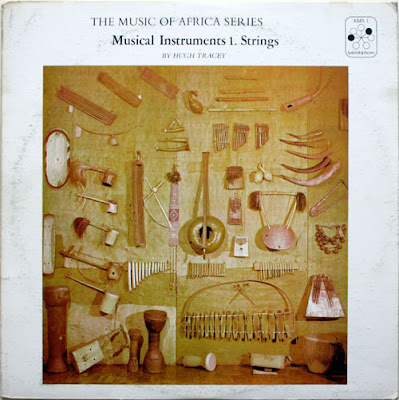 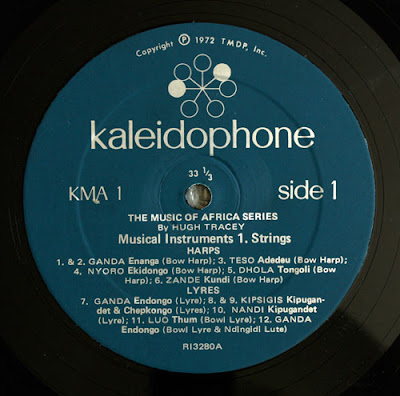 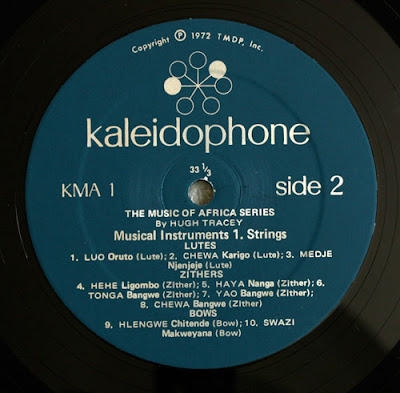 Inspired in parts by a post from Stefan on his wonderful blog Worldservice I decided to pay my tribute to Hugh Tracey who devoted much of his life to preserve African music that most likely otherwise would never have met our ears. The only gripe is of course that much is presented in a very inventory fashion and often we are left with a minute or two , sometimes even less, of music that could have gone on for hours. Well, I am sure his efforts helped to make many more people aware of the richness, creativeness and immense beauty, diversity and depth of African Music. This first part of the series of seven LP's are the devoted each to a group of instruments and the last three edited by geographical origin. Actually by nation, and I think, but I do not know for sure, that many of the other volumes, they were supposedly 118 LP's in all, issued on different labels, had that similar approach. I have come across a few others that were not by nation (geography) but by the best hits of a certain year. This of course resulting from the fact that some recordings he made, he also tried to place on the more hit-driven commercial market. He placed several recordings on 78 rpms in the Gallo catalogue, but most were produced and distributet to reseach libraries, National Radiostations, institutions of music and and musicology and most likely some batches were distributed to various Ethnographic Museums over the world. 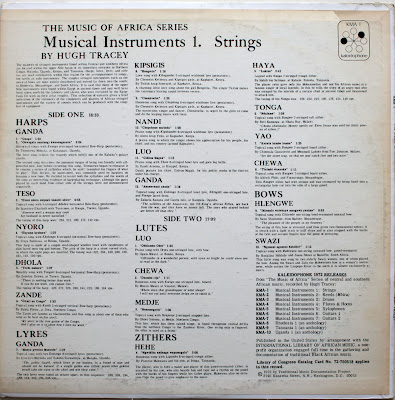 Great! I've wanted to listen to these ever since I saw the series listed on the ILAM site. Thanks a lot for sharing them, bo!

These are interesting records, even if the music is only featured in short samples. Thanks for bringing these to the light and keeping them alive!

You are welcome Arvind and Rob, and yes I find the snippets a bit short but live with it because of their sometimes true uniqueness and I also would love tpo have more of the ILAM series that do not overlap this series, maybe they have longer versions to but I doubt it. Do you know if they are? Any copies floating around. Do they have good documentation? There seems to be gaps also in their own series, or maybe some numbers were left vacant. I purchased the whole series from Sharp Wood Productions minus three CD's that I could not get, and even thou they don't completely overlap I have not yet noticed that there were longer versions. But I have not compared that carefully

Thanks a lot, Bolingo!

hey any chance of posting the hugh tracey links to mediafire?
as multiupload appears to be dead?
great blog. i know its alot to change
but the hugh would be a great place to start
thanks for sharing all this music
robert

i especially like the simha arom links
i am reading his book now and its a joy.

Your affect is totally appreciative and newsy.
pro audio