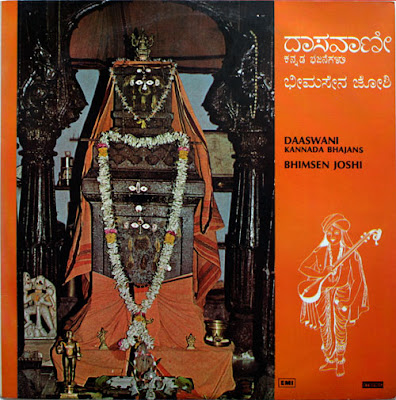 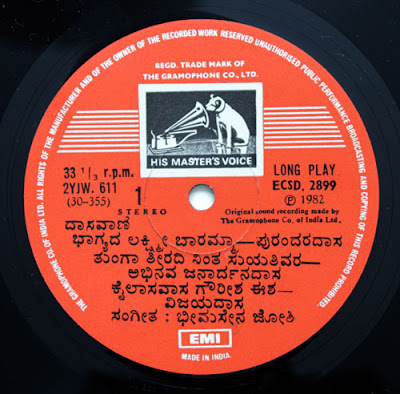 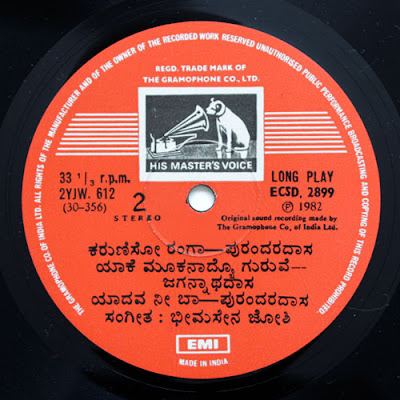 During the 13th century, there arose in Karnataka a new religious-cum-literary movement called the Dasa Vangmaya or the Haridasa Sahitya. Through songs written in simple and quite often colloquial Kannada, it sought to bring to the people the message of the newly founded Vaishnava Bhakti School, the Dasakuta.

Through the songs started as a popular expression of the Bhagawata Dharma and the theistic Dwaita Siddhanta, they succeded in attaining a wider appeal not only because of their ethical and devotional content but also because of their penetrating and critical observations of human nature, its follies and foibles.

Pioneered by Shri Naraharitirtha and Sripadaraya, the movement reached great heights during the 16th century through the efforts of Shri Vyasatirtha and two of his most illustrious diciples, Purandaradasa and Kanakadasa.

Vadiraja, Raghavendratirtha, Vijayadasa, Prasanna Venkatedasa and Jagannathadasa are some of its later exponents. The theistic and mystical touches of their songs raised them to the stature of spiritual literature; while their music made them a rousing expression of devotional sentiments. The central theme of these songs is the realisation of the supreme nature of the god Narayana, or Shri Hari, through the twin routes of "Bhakti" and "Vairagya".

Purandaradasa, the most prominent among the deciples of Vyasatirtha was said to have been a greedy, miserly and mean-minded rich merchant before he became a Haridasa, and a member of the "Dasakuta". Vithala is the central deity of all his devotional songs, and forms a spiritual link between the Dasa Sahitya of Karnataka and the Sant Vani of Maharashtra.

It is to Purandaradasa that this new movement owes its most mature achievements. He pioneered "Carnatic Music" and was a major source of inspiration to the well known composer of the South — Thyagaraja.

Pandit Bhimsen Joshi, in his glorious voice fully recaptures here the spirit of this grand tradition of devotional songs. Through his highly evocative rendering of the worlds, which communicate more than their literal meaning, he brings to life the most endearing features of the Dasa Vangmaya — the intimate and affectionate terms in which God is addressed by the devotee, as also the unique equation that exists between the two.
Listening to these songs and their soul-stirring music is a profound experience. 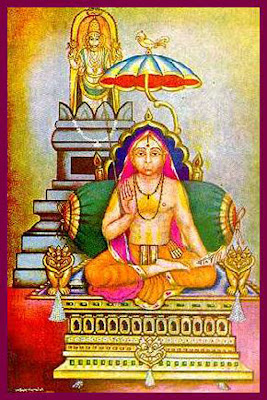 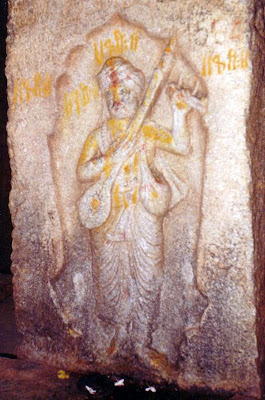 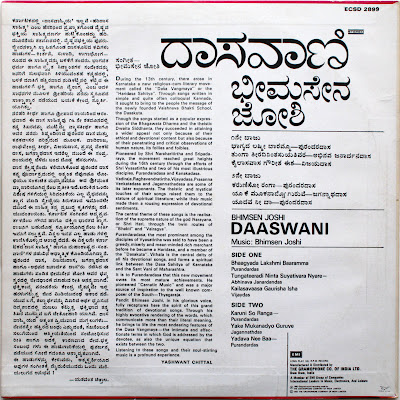 I thank you on behalf of my entire family for this and the abhangs! We have most of the songs on cassettes, but they're really old and not in a good enough condition to be ripped satisfactorily.

My father in particular was overjoyed to see these posts. And these songs bring back so many happy memories; music that got played a lot when we made road trips through India in the 80s.
Some music demands privacy and stillness, but the music here enhances (and is enhanced by) long, contemplative drives on near-empty backroads :)

Very happy to hear that Arvind, especially that your father who also seems to be a great music lover, like I know your mother and maternal grandmother both are. Happy these records came back to use! Sounds like we should make a road movie;-) Without the chases of course... ;-)

I'm happy to find this music on the internet, didn't expect it! Thank you!

I remember listening to some of these songs in Mysore, in '93. Must have been real popular then, heard them numerous times over a two-week period.

Happy you found them!
I think they are still popular. No?
Did you find any other good devotional music while you were there?

I'd presume they're still popular, though I haven't been back in more than a decade. Back then, these devotionals held pride of place in many people's cassette collections in Karnataka. That's how I came to know about them. A person I visited there picked the cassette up from a box full of cassettes and played it for me :)

Unfortunately, the few cassettes of Kannada devotionals I brought back have all been grabbed by friends. I picked up some devotionals by M.S.Subbulakshmi, but these aren't hard to find. I'm sure you have them, they've been reissued many times on CD.

I can confirm that these devotionals are still hugely popular! Most families with an interest in music or religion (often both) in Karnataka and Maharashtra (in the case of abhangs) will have these in their collections. In addition to this, its clear that the great fame of Bhimsen Joshi has carried this music out of the state borders, into homes that wouldn't have discovered it if he weren't the singer. So you'll find these in many homes all over India. I can't help but be reminded of M.S.Subbulakshmi again, possibly the only other artist who enjoyed such pan-Indian popularity.

Thank you so much for this and the rest of your fantastic blog. As an armchair ethnomusicologist this is a genuine life line!