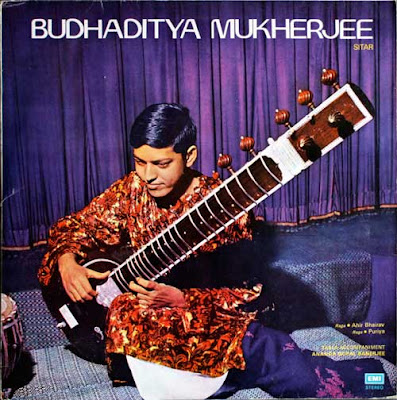 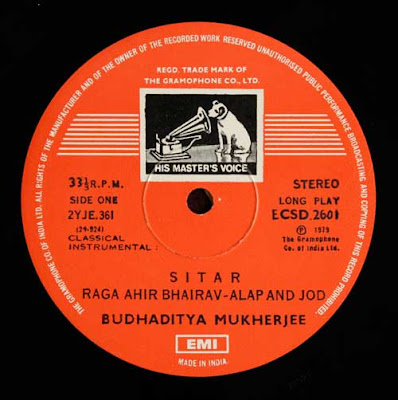 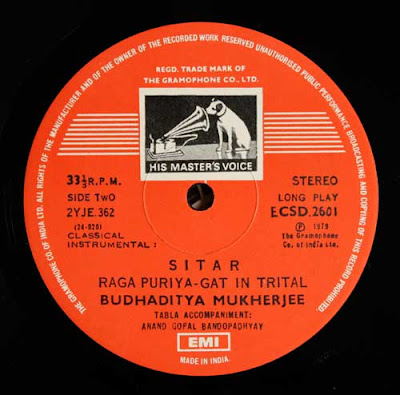 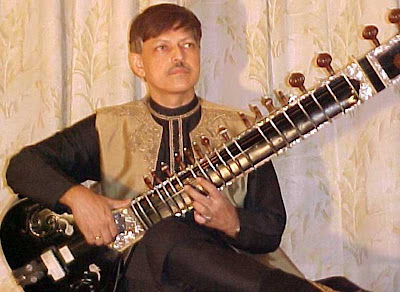 Here is another little treat from the extensive collection of His Excellency. I am looking forward to our next meeting, and maybe if he is the right mood he will pick up the surbahar or maybe even the been and strike a few notes to safely envelope us from the hardships of the dusty world. Anyhow here is one of the earliest recording I know of with Budhaditya Mukherjee. Of his total of eight LP's cut, this is his third one and the first on EMI-India, I can post three more records by him later if there is an interest. Hope you enjoy!


You can check his discography here

Budhaditya Mukherjee (1955–) is a Hindustani classical sitar and surbahar player of the Imdadkhani Gharana (school).
read more in the Wikipedia entry about him here

It was in the year 1976. A memorable event indeed. Hailing from the industrial town of Bhilai in Madhya Pradesh, a teenager was found toying with his Sitar with all the efficacies of a Maestro-in-making before a conglomeration of connoisseurs, critics and music-lovers in a major concert at Calcutta. And that was Budhaditya Mukherjee, a student of Engineering — shy, unassuming, looking more like an ascetic than a performing artiste with the glamour of the present day. His second appearance in Calcutta was more astounding, fantastic and sparkling with incredible artistry. He surprised everyone as much with his precocious talent as with his technical fitness and skill. He was immediately greeted as a Sitar-prodigy and acclaimed in no uncertain words that he was a discovery of the age in the domain of Indian Classical Music. Unanimously he was reckoned to be the torch-bearer of the rich cultural heritage of our National Art.

Budhaditya started playing Sitar at the tender age of five under the guidance of his illustrious father Mr. Bimalendu Mukherjee who is an eminent string musician having had his grooming in the style of late Ustad Enayat Khan. He imbibed ‘Gayaki’ style of Kirana School probably from his subsequent association with Pandit Jai Chand Bhatt. But it is Ustad Vilayet Khan, the sitar wizard, who has perhaps influenced him more in the later stages of this young artiste in shaping himself.

Budhaditya has been playing before a cross section of music-lovers stretching from Assam in the East to Gujrat in the West and from Punjab in the North to Karnataka in the South. He has been abroad also. Only a couple of months back he returned from a successful tour in Yugoslavia, Poland, Bulgaria and USSR as a delegate of the Government of India. Everywhere Budhaditya's virtuosity have made his full-house audience responsive. He is now twenty four and forsaking a brilliant career after obtaining first-class- first in Metallurgical Engineering, Budhaditya has opted for music which is his first love.

Budhaditya Mukherjee is now an exclusive artiste of The Gramophone Company of India Limited and for his first album from HMV, he has chosen to play ‘Alaap’ and ‘Jod’ in Raga Ahir-Bhairav on the first side. On the second side he has delineated Raga Puriya with a judicious treatment of ‘Vistar‘, ‘Taans’ and ‘Jhala’. The composition is set to Trital.

Tabla accompaniment of young Ananda Gopal Banerjee is an additional attraction for this album.

unceremoniously snipped from the sleeve notes 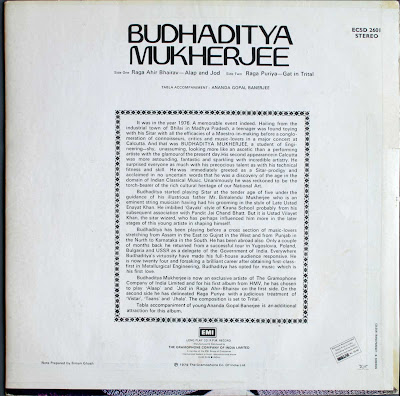 there's definitely interest. i've liked him for a long while...
=D

He's a wonderful sitarist! Its nice to get to hear some of his earlier recordings, these are indeed very hard to find.

Thank you for all you've shared (and continue to share) here, and please also give us the privilege of listening to any other records you might have of him playing, and of other good artists too.

Holy cow, that is a beautiful cover!

Dear B. & dear all, I ask for your help, because Pandit Budhaditya is sort of a problem for me, and since many years. Of course I appreciate his flashy tecnique, his geometric constructions of taans and impeccable timing, however I am really at a loss with his sonic depth of sound and emotional rendering of raga-s. Very far from his main source of inspiration, Ustad Vilayat Khan, I dare say. I listened to him even in private mehfil, but this impression is still lingering...Would appreciate different opinions! Anyway the recording seems one of his best, thanx again!

To be quite frank, I for one have very little appreciation for flashy techniques and other antics, and although I believe I am not posting any substandard music many of the sitar records (and there will be many more, have not even started with the Imrat and Vilayat records yet, nor Ravi for that matter that I care less about as compared to the Etawah, reason for that is mostly because I felt they were pretty well represented all over the webs) are mainly for the benefit of people who have been demanding such. Many came to Indian classical music and in a way so did I. First through Bismillah Khan and certainly also Vilayat Khan, but also Ali Akbar Khan and Ravi Shankar, but fortunately I was very quickly introduced to vocal music and I think it is so much richer and much more rewarding for me to listen to. (B.t.w. I still consider Bismillah Khan to be something of a vocalist!)

Anyhow, someone else more versed in the string theories will have to pick up the baton as I am not running in this race ;-)

I have found much pleasure in Sitar especially played close by for immediate pleasure and enjoyment, my good friend Chandu, peace be upon him!, could rehearse for hours without me getting in the slightest bored, even though I always preferred him playing the surbahar. But I am rather insensitive to acrobatics, and I only listen carefully when my heart tells me to do so.

Sorry, to be of so little help!

This also does not mean I did not enjoy listening to Budadhityas record, although there are several other musicians I like to listen to more. I guess it is more about temperament.

I tend to be much less critical to the music that does not move me. I don't necessarily see any flaw in either the artist nor in me. But then again I am no critic, I am just a listener.

For instance even though I do not listen to very much by Ravi with any particular joy, I would never come up with the idea that he was a bad musician...

So anyhow for myself I leave it at that, we cannot expect to satisfy everyone all the time, and that goes I guess for musicians as well!

Some were happy some were not!

But Giri, Please carry on the discussion, I may very well learn something important from it!

I agree however with the comment by panchamkauns that cover is very pretty ;-)

There are in fact a few surbahar recordings of Budhaditya, and for me, they are probably the best examples of his musicianship. The surbahar may be the more difficult instrument in terms of technique, but musically I believe it is easier than the sitar. It invites a slower tempo, and its gorgeous tone resonates better with listeners’ heart strings.

Do you or anyone else know of any other surbahar pieces?

Dear B & Panchamkauns, thanks for sharing your insights.

First of all, yeah! The cover is definitely gorgeous!

Well,Bolingoji, I followed your same itinerary in indian (mainly hindustani) classical music: from instrumental childhood to vocal maturity; I don't know if it's a common path, but I guess for westerners of my age -- fifty and so -- is rather frequent (being easily exposed to the sitar craze of late Sixties/Seventies, from Norwegian Wood onwards). I confess that listening nowadays to stringed instruments, and sitar in particular, is for me slightly fatiguing, with the endlessly joyful, luminous and blessed exception of Nikhilji and few others (including all the marvelous rudra vina maestros).
I surely can enjoy once in a while flashy techniques & acrobatics, but my problem is that Pandit Nikhilji is such a huge touchstone... He was an amazing virtuoso, and he obviously obviously mastered all the most vertiginous technicalities, but his music was always, even at unbeliveable speed, a perpetual and graceful flow from the deepest sources of sonic mistery, pure inspiration, emotional meaning. But probably he, like Ustad Bismillah, was more in the category of singers...

And surely one enigmatic quality of music is the capacity of creating different resonances in the sympathetic strings of every human heart.

Or, to make it short, probably the excellent Budhaditya (great, but not grand) is not my cup of tea!

Dear B:
I am unable to download many gems from the rapidshare site - error says too much traffick! Is there a way to get to these gems? Many thanks, for posting these beautiful and lost treasures! Much much appreciated. Sanjay

i love the strings as i am a string player. the vocals are harder but i do love them.
thanks for all the posts. keep coming back
robert
ps future posts?