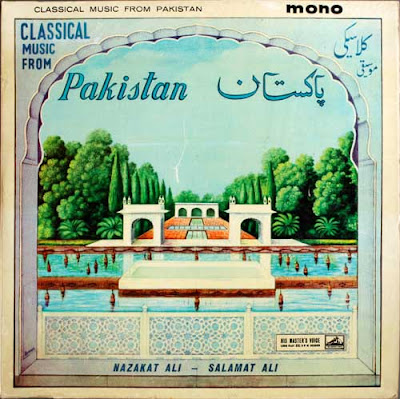 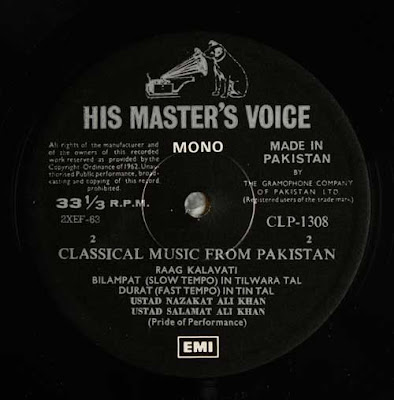 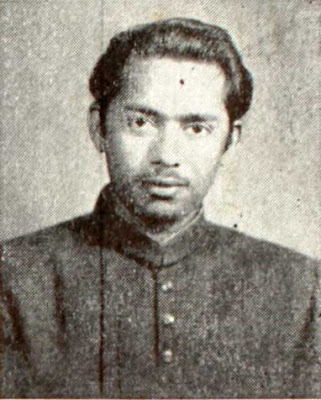 Ustad Salamat Ali Khan (Born in 1934 in the Hoshiarpur district of Punjab, died in 2001), father of an entire family of vocalist-musicians, performed (at the age of nine), with his brother Nazakat Ali Khan, as the famed 'Ali Brothers'. They were internationally renowned as superstars in the 60's and 70's for their immense talent and artistry in the classical form. 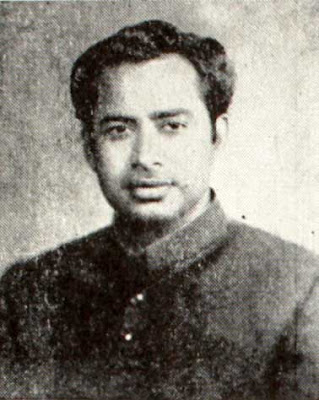 Ustad Nazakat Ali Khan (1932? Older brother that died much earlier than Salamat)
(Most likely Tawfiq or someone else can fill in the dates here or I'll do it when I find them!)

These two young artists, aged 26 years and 24* years respectively are well-known in the sub-Continent of Indo-Pakistan. They were taught by their father. Ustad Vilayat Ali Khan, a great exponent of classical singing, under whose able guidance they have attained for themselves a unique position among the exponents of classical music.

These two artists are followers of Sham Chroasi School of Music which has been in the limelight for many centuries, specialising in the faithful reproduction of the original form of each Raga (composition). Both, however, in adhering to the basic teaching have enriched their singing with new ideas giving a contemporary touch to their art.

The singing is accompanied by Tabla and a Sarangi. Tabla, played here by Ustad Allah Dutta, are a pair of drums — one treble, the other, bass. Sarangi played by Ustad Zahoori Khan, is a three-stringed instrument similar to a violin.

One of the most popular forms of classical music sung to-day is called “Khyal” which has two distinctive parts — the Bilampat (slow) and the Durat (fast). The invocation always starts in bilampat and gradually increases in tempo to end in Durat. Most classical singers are either able to sing well in Bilampat or in Durat but both Nazakat Ali and Salamat Ali are equally proficient in both, which is a great achievement, In this recording, Nazakat Ali and Salamat Ali treat you to two Ragas.

Raga Durbari is a composition of Tansen, the famous musician of Moghul Emperor, Akbar the Great, In this piece, which describes the Emperor's Court and all its pageantry, the young artists play Bilampat in 14 beats and Durat in 16. The mind and soul seem to be carried away into an atmosphere of purity and godliness.

The composition is as follows:

This piece was evolved recently by Maharashtrians and consists only of five notes. It expresses the loneliness and despair of a parted lover for this sweetheart. This is a rather sad and sophisticated piece and to be able to sing it well, the artist must first get into almost a trance as if he himself was the lover and it was he who was missing his sweetheart.

This Raga is made up of the following scale:


snipped from the backside of the record sleeve


* About the publishing date and birthdays please do your own math! I am lousy even at common addition! 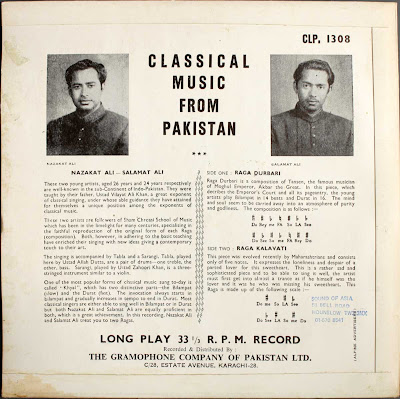 so much wow. merci

Bolingo thanks for this, we enjoy it right now in Russia!

Memorable calendar-like front cover, would be fitting in a barber shop in Lahore... irresistible!

Exquisite music, as usual with the Ali-s.

Very nice, the Durbari is serene. Thank you for this.

P.S - Yet again I make a plea to you for lossless renditions of these very rare works of art. It is of utmost essence that these be preserved and prolonged in proper fidelity. I am willing to provide all assistance possible in my capacity in this regard.

thank you for sharing a very good transfer of this Lp record! saved me the trouble from transferring my own copy!