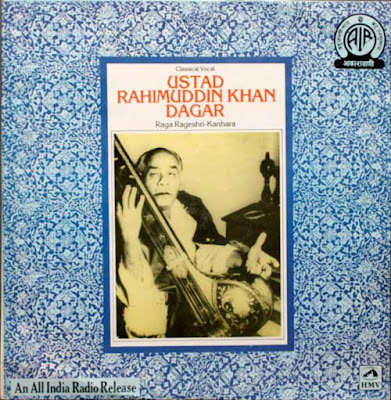 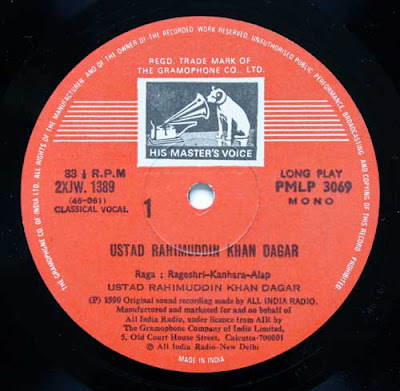 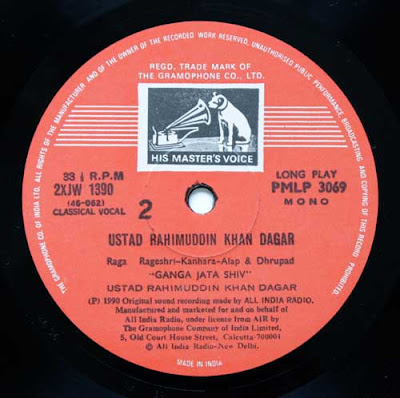 Ustad Rahimuddin Khan Dagar (1900-1975) was the second son and student of Allabande Khan and one of the outstanding dhrupad singers of our times. He was also well-versed in sangeeta shastra. He was associated with the courts of Jaipur, Alwar and Indore. His son is Fahimuddin Khan Dagar, another well-know dhrupad exponent.

Ustad Rahimuddin Khan Dagar, was one of the most eminent scions of an illustrious house of musicians. Dagar Family traces its lineage to Miyan Tansen, the court-musician under the patronage of the Moghul emperor, Akbar. Miyan Tansen is universally acknowledged as the maestro, who pioneered the contemporary “Dhrupad-Dhamar parampara”, which marked the genesis, evolution and development of the Hindustani “Sangeet Paddhati”, the traditional musk of north India, both vocal and instrumental. And the Ustad carried on the precious heritage and enriched it with dedication and justifiable pride till his death at 75.

Son of the maestro, Ustad Zakiruddin Khan Dagar, one of the ail-time great “Dhrupadiyas” of yesteryears, melody and rhythm coursed through the Ustad’s veins. His father was also his guru, whose magic touch backed by the son's epochal “riyaz”, helped the youngster to rise to enviable fame and glory. He was a recipient of the Padma Bhushan and a string of other accolades and distinctions.

The Ustad was endowed with a ringing, sonorous voice, and his style carried authenticity and evidence of erudition and scholarship. His ‘Gayaki’ revealed a majestic pace and benign expression. He had an uncanny knack of winning over his audiences as much by his gay, ebullient manner as by his profound, sublime music. With typical dignity and poise, the maestro projected his chosen “Ragas” by means of smooth and soothing “Alap”, while trenchant rhythms and pounding accents characterised his Dhrupad-Dhamar renditions.

Raga Rageshri-Kanhara, This “Raga” sounds like an ingenious fusion of two separate but well-known melodies, both rendered in the second quarter of the night. He has invested his chosen theme with all the familiar virtues- musical, rhythmical and aesthetic. It is first presented in prefatory “Alap” and then through a “Dhrupad” composition, an invocation to Lord Shiva.

culled from the notes on the record sleeve 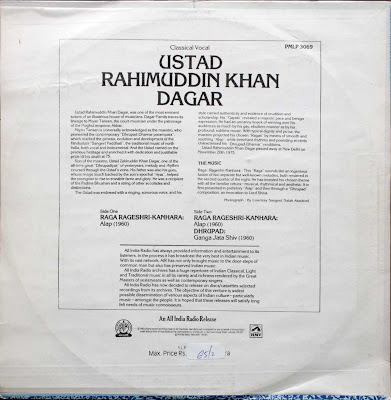 It is a testament to these singers’ greatness (the master sings with his son ... I suppose) that they at least in part manage to conquer the unpleasantness that is Rageshree Kanada. =)

This is pure mastery. I wonder why there aren't more recordings of Ustad Rahimuddin's music around. Surely there must be more in private collections, but until the time that these are published, most of us won't even know that they exist. Which brings me to a recurring thought...why are collectors typically such an insular lot? I'd guess that for every one of them out there who's keen on spreading his/ her collection, there must be at least a thousand who simply don't care.

Godspeed and love to the kind ones like you, who do share, and so generously at that! I hope it pushes a few more of those collectors to come out too ;)

extraordinary post, bo! i thought this was released only as a cassette. but i guess you're always full of such surprises!