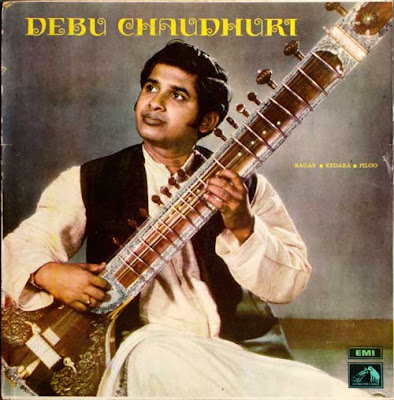 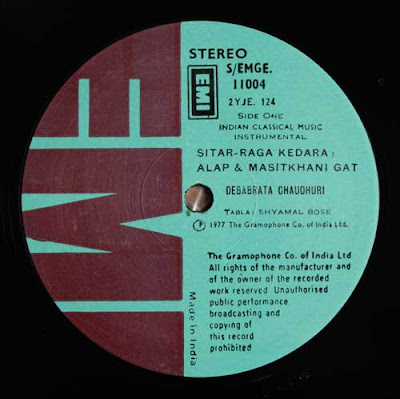 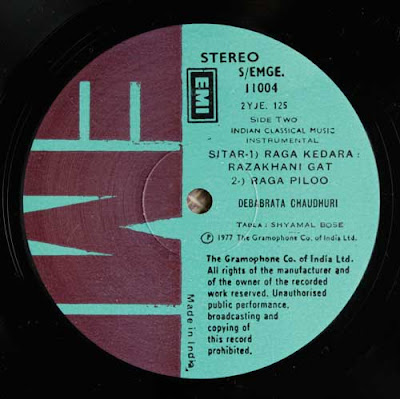 Here is another, not so exposed sitarplayer for your enjoyment.

There really are not that very many recordings on vinyl by him that I could find but this is one of the first that I knew of. He was a disciple of Ustad Mushtaq Ali Khan, an exponent of the Senia Gharana. I have posted one more recording by him before, recorded in 1987, ten years later than this one where he plays the ragas Bageshri and Maund. You can listen to it here

Thirtyfive year old Debabrata ‘Debu’ Chaudhuri is one of the most important sitar players of the day. Born in a business family of East Bengal, Debu had decided at a very early age that music would be the sole love and passion of his life. There was opposition from some quarters and scepticism from others, how could anyone without a traditionally musical background carve for himself a niche in the world of classical Music? But those who know Debu know that there was no room for doubt then or now. Debu has all that goes to make a musician great. He has the vision, the intuition and the grasp, above all his music is the creation of a man completely dedicated to his art.

Debu is a disciple of Ustad Mushtaq Ali Khan, an exponent of the Senia Gharana marked apart from other things, for its lineage which can be traced back to the great doyan of Indian music, Mian Tansen. The Guru-Shishya Parampara (the tradition of passing knowledge from master to pupil) of this school, was initiated by the great Sitar player, Amrit Sen. who was a direct descendant of Mian Tansen. Ustad Mushtaq Ali Khan represents all that is the best in not only his own school but also in the traditional Indian classical music, the intrinsic purity and lyricism of style, coupled with a perfection of technique. As a recognition of his invaluable contribution to the preservation and furtherance of Indian classical music, the Ustad was awarded the prestigeous Academy Award last year. Debu has had the proud privilege of learning sitar at the feet of this maestro. 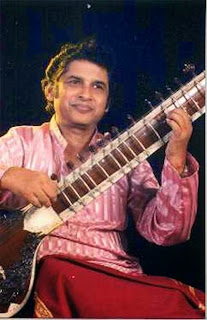 Debu Chaudhuri has had many opportunities to display his talent both at home and abroad. At home he is an artiste widely acclaimed and has also been featured in the National Programmes. Abroad, he has had the distinction of being the first Indian musician to participate in the famous Montreaux-Vevey Music Festival in Europe and Shiraz Festival of Iran. He has also represented India in other International Music Festivals.

Debu stepped out of India for the first time in 1967 and since then has gone round the world half a dozen times. His recent tour covered among other countries, South America and the West Indies, which gave the people there their first ever opportunity to savour of Indian Classical music.

Apart from the general popularity, Debu's excellence in his field has attracted golden opinion from eminent musicologists all over the world. Dr. Nicholas Nabokav classes him as one of the finest musicians of the world. Dr. A. Danielou, Director, International Institute for comparative music in Berlin, has given him a place in the recorded U N Anthology of Oriental Music. At home Debu has been acknowledged as a musician of great lyricism and imaginative wealth.

What does he feel about his frequent trips abroad ? They are stimulating he feels, and above all he enjoys them because they give him an opportunity to acquaint his foreign audiences with the inherent beauty and mystery of Indian classical music.

Currently Debu is teaching instrumental music at the Delhi University and the Bharatiya Kala
Kendra, and he has a fine crop of promising students to his credit, some of whom have already been recognised in the music world.

This Album was recorded at the H.M.V. Studio, Calcutta, immediately after Debu's return from his last world tour. Accompanying Debu on the Tabla is Shyamal Bose, an artiste of All India Radio, Calcutta. Shyamal Bose, a disciple of Ustad Feroze Khan and Shri Jnan Prakash Ghosh is a virtuoso in his own right and belongs to the Farakkabad School of Tabla players.


from the original sleevenotes by Sujata Chauhan 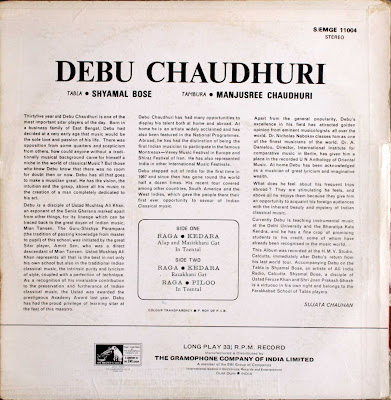 thank you very much ! a great sitarist, but it is sad that there aren't many recordings available of the maestro !

pls share any other stuff that you have by Pt Debuji.

also, your post of Jamaluddin Bhartiya was superb. pls do post if you have any other albums/ recordings by him !

many thanks for the great hindustani classical music !

Thanks for the opportunity to listen to these lesser known sitarists, bo! I've heard many good things about Debu Chaudhuri, but haven't heard him playing yet.