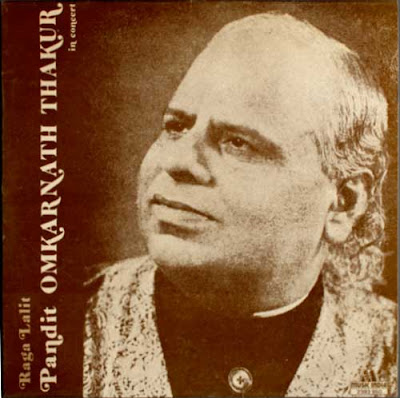 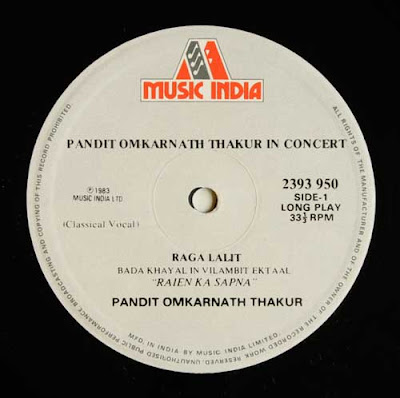 Panditji starts the Vilambit Khayal ‘Raien Ka Sapna’, unfolds the raga by aakapchari in the Poorvang and goes on to complete the Antra.

Panditji continues the Vilambit Khayal with the Upaj-ang and goes on to make varied Taan patterns. He concludes his exposition with the Chhota Khayal ‘Piyu Piyu Rotat Papihara’ where he shows the varied aspects of Shuddha Madhyam - the main Nyas-swara of Lalit. 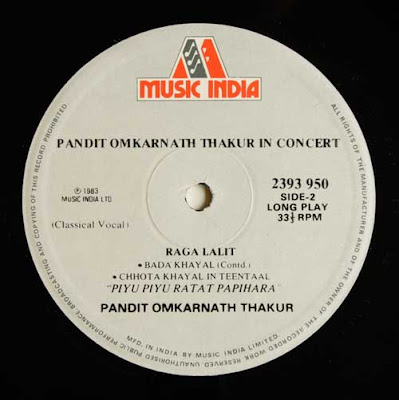 17 years ago, a musical giant left for the heavenly abode leaving behind a rich treasure of his work and research in the field of Hindustani Classical Music. ‘Sangeet Martand’, ‘Padmashree’, late Pandit Omkarnath Thakur occupies a position of rare eminence amongst the classical musicians of India.

His years of research on Maharishi Bharat's ‘Nat ya-Shastra’ along with a thorough study of varied systems prevalent in the North Indian as well as Carnatic music, led him to propound thought provoking theories and write volumes of authoritative books on the subject. A worthy disciple of a great scholar-musician Pandit Vishnu Digambar Paluskar, Omkarnathji made it his life's mission to propagate India's musical heritage amongst the classes and the masses alike.

Panditji was a musician with a difference. A strict disciplinarian, Panditji was known as much for his arrogance as for his musical genius. Keeping in tradition with the norms of the majestic gayaki of the Gwalior Gharana, Panditji evolved a style uniquely his own. His Regal Persona, his marvellous command over Sanskrit and Urdu alike, his thorough insight into every raga-exposition and his unique ability to communicate with his audience through his emotionally packed renditions left the listeners spellbound. His concerts were invariably reflective of his interpretation of the ‘Nav-Rasa’. In fact, he would often demonstrate different Rasas in the cheez (song) by singing one phrase in several other ways.

Not many of Panditji's works are available to the musical ear anymore. Music India has excavated a rare recording to share with aficionados of classical music. On the occasion of his 17th death anniversary, we pay our humble tribute to Panditji and take immense pride in releasing on this record his full rendition of Raga Lalit sung sometime during the early sixties. Opportunities to hear rare recordings of this nature are few to come by. 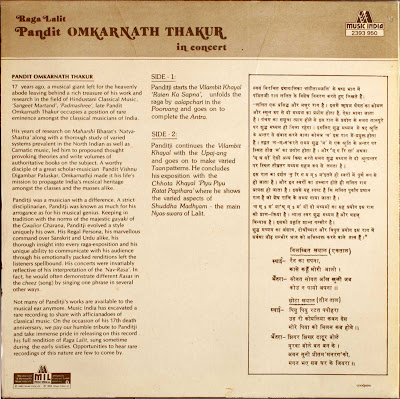 Dear Bolingo,
nice to see the original LP. I only have this as a CD (Music India CDNF 054, published 1989). The CD does not have the liner notes. Thank you.

Thank you Bolingo your choice is as always very good expecially for indian classic music...This Omkarnath Thakur concert is wonderful and I really enjoy the choice to post even the lossless version...I hope it will became usual...your job for this blog is so important for everyone interested in the music of the world and the lossless version, in my opinion, is the right way to complete your documentation. THANK YOU again