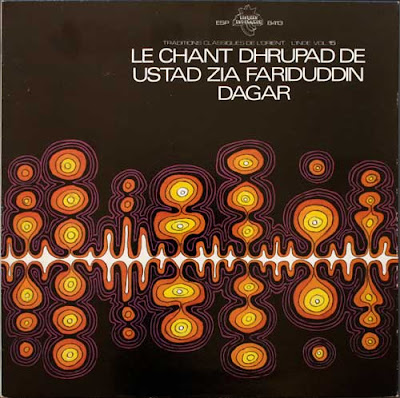 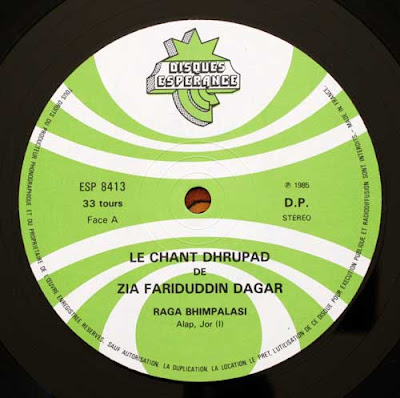 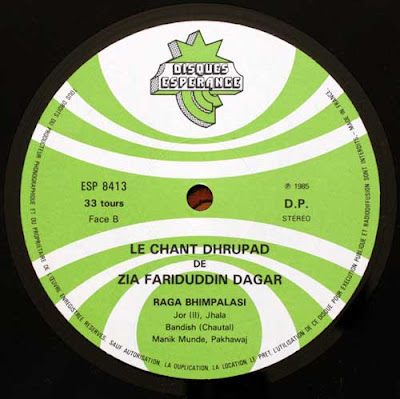 I guess no one will complain if I continue to post recordings of the Dagar family, so here is a great recording from the early eighties of Farid, as he was affectionately known by some of his local students here. Hopefully this spree of Dagar recordings will also attract some new ones, so if you have something laying around, please share it with us. I will post one more locally produced record with Fariduddin recorded in the eighties. Later I will also try to locate what private tapes there are laying around. I have a few and there must be many more. A consorted effort here would be something very joyous, at least to me. What do you say? Anyhow I feel certain that you will enjoy this one!

(thanks WD, for your falcon eyes) 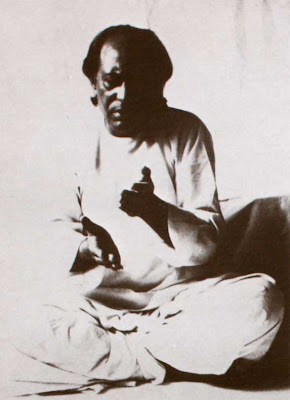 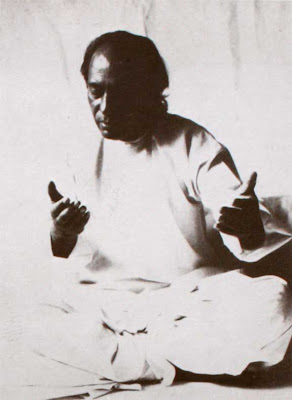 Zia Fariduddin Dagar (born 1932) is an Indian classical vocalist in the Dhrupad, the oldest existing form of north Indian classical music (Hindustani classical music) and part of the Dagar family of musicians. He taught at the Dhrupad Kendra, Bhopal, along with his elder brother, Ustad Zia Mohiuddin Dagar for 25 years. He was awarded the 1994 Sangeet Natak Akademi Award in Hindustani music-Vocal by Sangeet Natak Akademi, India's National Academy of Music, Dance and Drama

He was born in Udaipur, Rajasthan in India on 15 June 1932, where his father, the great Ustad Ziauddin Khansahib was the court musician of Maharana Bhupal Singh of Udaipur. He was taught dhrupad vocal & veena by his father. After his father’s demise, he continued learning under his elder brother, Late Ustad Z M Dagar, the foremost Rudra veena player of 20th century. Ustad Zia Fariduddin Dagar represents the 19th generation of the musical tradition of the Dagar family that is believed to have preserved and nurtured Dhrupad for 20 generations.

Ustad Zia Fariduddin Dagar has done a lot for popularizing dhrupad music by his numerous concerts and workshops. He has performed widely in India and abroad, and received the Tansen Samman from the Madhya Pradesh government and the Sangeet Natak Akademi Award. In 2005, he was presented with the Lifetime Achievement Award by the North American Dhrupad Association.
He has a remarkable command over microtones (swara-bheda) and various gamakas, and is noted for his gradual development of alap through vilambit, madhya and drut laya (slow, medium and fast tempo). He is probably the only person alive to be able to demonstrate all the five geetis mentioned in the Sangita Ratnakara namely, Shuddha, Bhinna, Gaudi, Sadharani(which is dagarwani of today) & Vegasura (which is popular in south India). He is the most influential dhrupad vocalist in India after the senior Dagar Brothers (Ustads N. Moinuddin & N. Aminuddin Dagar).

By 1980, he had virtually settled down in Austria teaching Dhrupad in Austria and France. Once, during a visit to India, one of his disciples, the filmmaker, Mani Kaul came to him and pleaded with him to provide the background score for a film, The Cloud Door (1994) he was making on Madhya Pradesh. During the making of the film, they spent over two months in Madhya Pradesh, a lot of time in Bhopal,
and Ustadsahib agreed to move back to India and to take charge as the Guru at this Gurukul. He taught dhrupad for 25 years at this Dhrupad Kendra, under the Ustad Allauddin Khan Music Academy, Bhopal, to students like the Gundecha Brothers.

Nowadays, he stays & teaches at the Dhrupad Gurukul near Panvel, which was built by his elder brother Ustad Z. M. Dagar. He continues to perform widely in India and abroad. 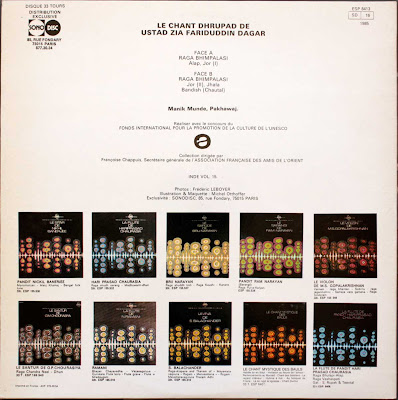 What could I say? I have run out of thanks, please accept my humble blessings!

Excuse the typo 1965 obviously should be 1985 thanks for pointing this out WD!

A blissful company dwelling in a blissful ocean of music!
:)

And speaking of Dagars and Mani Kaul, for whom it may concern here goes Mani's documentary on the Dagarvani, featuring Zia Mohiuddin and Zia Fariduddin:

This is an exceptional record! To anyone who hasn't yet listened to it, all I can say is don't miss it!

This is one of the most magical recording I have ever heard . I heard and an acquired this album about 1989 but subsequeently I lost it. I had hunting for it for past 11 years unsuccessfully unitil today." I have run out of thanks, please accept my humble blessings!"--Adding thanks ad nauseam